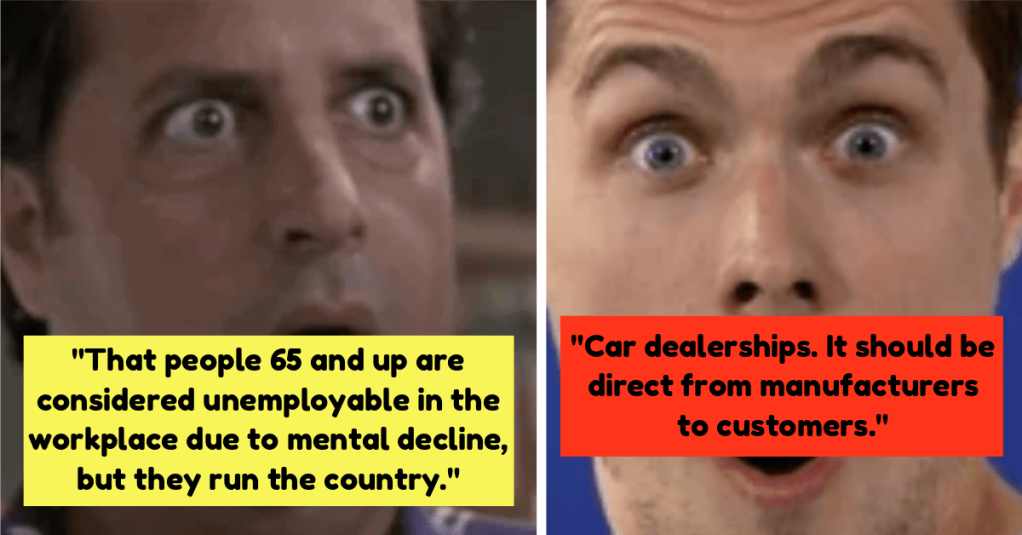 It’s a sad state of affairs when you have to admit to yourself that you always have to be on your guard because there are so many scammers everywhere.

And today we’re gonna hear from folks on AskReddit about scams that are so normalized that people don’t even realize it.

“That people 65 and up are considered unemployable in the workplace due to mental decline, but they run the country.”

Why the F**K is there an entire industry dedicated to forcing you to overpay for a product and finance it with a high interest loan?

It should be direct from manufacturers to customers.”

So many cleaning products contain ingredients only to increase the amount of foam. People think foam means a better product. Your toothpaste doesn’t need a foaming agent. Your dishwashing liquid doesn’t either.

We’ve been trained by marketing experts to believe in the power of foam, but a large part of it is a big lie.”

Paid off my student loans. 6 months later, couldn’t get a credit card because I didn’t have enough credit history.

Those b**tards want to keep you in debt so you keep paying them interest rather than being actually responsible with money. Burn it all down.”

“Having to calculate your taxes (unless you have things you can actually claim and write off). They already know what you should pay or get back.

This goes for the USA’s IRS and Canada’s CRA. Likely other countries too, but those for sure.”

““Professional” fraternities at a university.

“You’ve been invited to join Kappa Kappa Delta because of your outstanding GPA! A prestigious organization that looks great on your resume! Please pay us $100 to be a member.””

“Employers not giving raises that at least match inflation. Essentially paying you less money comparatively to the last year.

It especially annoys me when companies make deals with unions for like a 2% raise over four years, when you know the price of whatever they’re selling is increasing with inflation.”

“Microsoft Office now being subscription based.

That makes no sense when there’s no new content being released continuously.”

The concept seems great and to the point, but so much plastic doesn’t actually get recycled/reused.

Recycling was pushed by the companies that produce the most plastic so that consumers would focus on a feel-good project (“I’m saving the earth”) vs. the waste of these companies.”

“Juice cleanses and detox anything.

“That unemployment pays only if you get laid off and not if you are fired or quit. I don’t know how many times I’ve seen companies engineer ways to get employees to quit, or just lie during unemployment hearings.

Plus how often people are just driven out of jobs by management changing. You don’t get a dime if you worked for 25 years and the new boss harasses you into quitting your job.”

They started as a way to help the airlines make more money after 9/11 when air travel fell off for a while… now it’s just a scam that they use to make billions of dollars a year.”

“Natural healing shops who preach against medicine and doctors because “all they want is your money!”