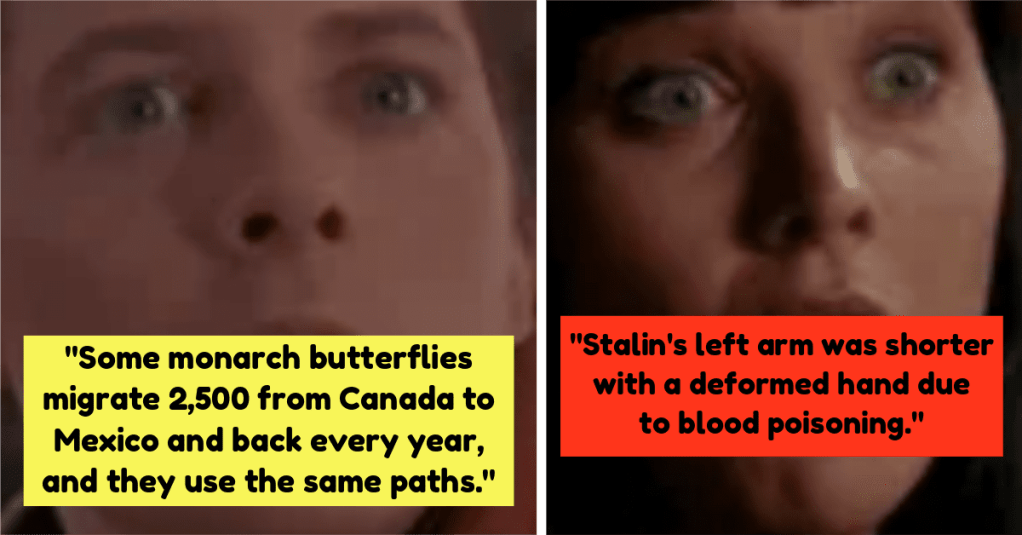 What’s the Strangest Fact You Know? Here’s What People Said.

Is your brain full of weird facts that really have no reason for occupying space up there?

I’m glad I’m not the only one!

Okay, now that we have that out of the way, let’s hear from AskReddit users about the strangest facts they know…for some reason.

“Shrimp live in the canopies of the Redwood Forests.

They get there via literal seagull poop, and the lush coastal ecosystem forms little puddles on the branches in which they grow and live.”

“Some monarch butterflies migrate 2,500 from Canada to Mexico, and back, every year, and they have paths and station that they use again and again.

When migrating over Lake Superior (Canada/US), they don’t follow a straight line: when they fly over it they go south for a while, then at some point suddenly turn east.

Some scientists think that they follow a route that goes around a mountain that existed in the past and has disappeared a long time ago… They’ve never unlearned the existence of the mountain, because they follow the same route every year!

There doesn’t seem to be a scientific consensus regarding where the “memory” is for that route or how they know where they are.”

“If you hold a sheep’s nose closed so that it can’t breathe it forces the sheep to pee.

Source: a friend of my Dad’s used to be a vet for farm animals, this was a great way of getting a sample if a sheep was sick.”

“Stalin was shorter than Napoleon at 5’5″ and his left arm was shorter with a deformed hand due to blood poisoning.”

“In the state of Pennsylvania, there are the towns of Intercourse, Climax, Paradise, and Blue Ball (no joke… these are the actual names of those towns) and they are all with range of each other.

But what makes it even more epic is that the locals use this humor for their tourism advertising.

“To get to ‘Paradise’, you have to start at ‘Intercourse’ and drive through ‘Climax’. But if you hit ‘Blue Ball’ you have gone too far.”

I only remember this because my Dad bought a t-shirt that had this written on the back.”

“Pineapples contain enzymes that break down proteins, which is why your mouth goes tingley when you eat lots of it.

Given this, theoretically you could dissolve a body in pineapple juice.”

This is because squirrels cannot d** from a terminal velocity fall; they would have to fall far enough to d** from starvation.”

“In order to snap someone’s neck like in movies or video games you need to be strong enough to apply roughly 100-115% of the victims bodyweight in rotational force.

Much more difficult than Hollywood would make you believe.”

“If you sneeze when coming from a dark room into sunlight, it is because of a specific gene which is named ACHOO. I know because I have it.

“The quickest way to the heart actually IS through the stomach. According to archeological evidence, the Aztecs basically discovered through their years of sacrificing people that it’s way quicker to cut open the stomach and then go up and under the rib cage to cut the heart out, rather than trying to break open the ribs to get through them.

They could apparently get someone’s heart out this way in only a few seconds, and there are accounts of sacrifices where multiple thousands of people had their hearts cut out in a single day, which would take forever if they didn’t know the quickest method.”

“The US is one of the few countries that allows “strike anywhere” matches to be sold. Do NOT bring them on a plane. For example, you’re going on a camping trip and put them in your checked luggage.

You’ll be fined several thousand dollars. There’s no exemption from the fine. But the FAA will work out a payment plan with you.”

“The foreskin of circumcised babies are typically reused as lip grafts. I learned this after I had to get my lip replaced.

It was interesting to learn some likely religious family practicing a basic tenant inadvertently helped give me my new lip.”

What’s the weirdest fact you know?

Spill your guts in the comments!