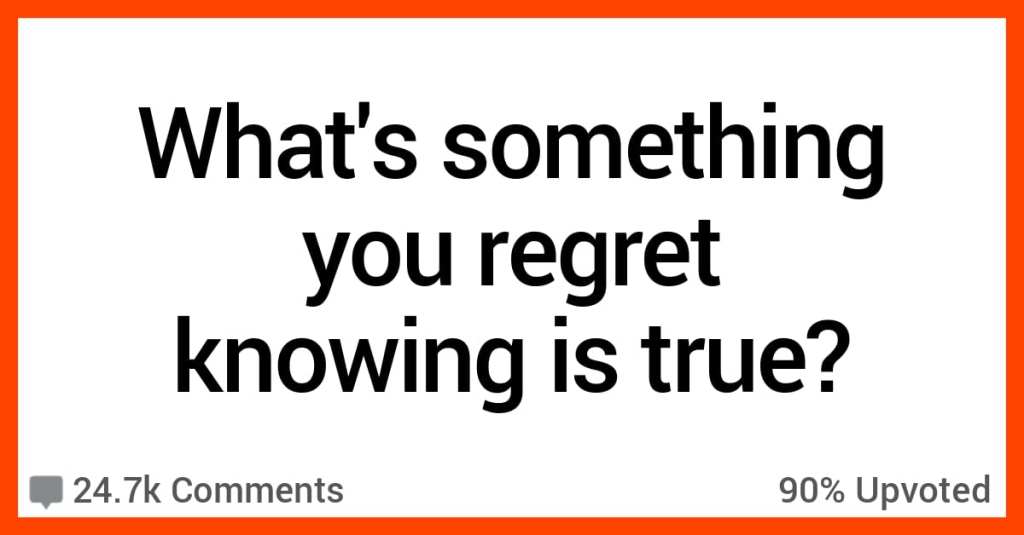 You know that stunned, sinking feeling you get when you’re researching something, or reading something, or just minding your own business and suddenly you know something you never wanted to, and wish you didn’t?

That’s the sort of moment these 14 people had when they learned these particular facts, so if you’re going to read through the rest of this thread, you’d better make sure you’re good and ready.

14. It almost sounds nice when you put it that way.

Sorta cliche, but there are millions and billions of living organisms on your body, so to them, you are their galaxy.

My colleague donated one of his kidneys to his brother and he experienced the entire operation without being able to move or scream.

Took many months of therapy moving on from this.

The death of Junko Furuta.

She was put through absolute hell that no human should ever experience.

I am serious when I say, look up the details at your own risk.

It’s so devastating that you’ll, most likely, never forget it.

The very first sentence spoken to us when we started A-Level physics was “Everything you have been taught at GCSE is wrong”.

It was then proven to us by disproving the GCSE notion that light cannot travel around corners with the Youngs fringes experiment.

10. Maybe not popular, but common.

More people have tapeworms than dogs.

That makes them the most popular pet.

That my mom never really wanted to marry my dad, was still in love with her college sweetheart, was unhappy in the entire marriage, and still had two kids with him, even if my dad didn’t want a second kid.

I love my little brother, but if your partner doesn’t want a kid and you stop using birth control so you can have one anyways, that’s F’d up.

Your child is more likely to be abused by someone you know than a stranger.

You literally have to protect children more from their own family and friends than random criminals.

They will kill babies to “free up” the mother to mate with them.

Female dolphins are actually quite promiscuous in order to combat this.

The females will mate with as many males around her as possible, that way when her baby is born the male dolphins aren’t sure if the kid is theirs or not.

That way, it insures the baby dolphins safety since male dolphins won’t kill it if it MIGHT be their kin.

Basically dolphins are the ultimate Maury show contestant, never knowing who the baby daddy is.

6. This should surprise no one.

Furbys eyes are in the front, which would make them a predator.

Someone tried and failed to save Abraham Lincoln — and his life just got worse from there.

Maybe it’s well known, but the song “I Don’t Like Mondays” is based on a horrific story.

A teenage girl named Brenda Spencer lived across the street from an elementary school.

One day there were a bunch of kids outside the gate waiting to be let in and she just started shooting at them.

None of the kids were killed, but two school employees were (the principal and a janitor, I believe, but I don’t remember for sure.)

Afterwards she went back home to wait for the police, and she called up a radio station to tell them what she did. When they asked her why, her answer was “I just don’t like mondays.”

3. I guess because they can?

Horses masturbated by hitting their 1m long dong against their bellies.

Female horses rub against wooden polls, and end up with splinters 10cm long in their coochie.

The voice actress for ducky from land before time being murdered by her own dad.

Dying from starvation is because your body exhausted all of its resources to feed your brain and then finally as a last resort it taps into digesting the muscles around vital organs in order to get the ketones your brain needs until there’s only one muscle left… Your heart.

So technically you die because you ate your own heart….

Not a scientifically accurate explanation.

Closer to ELI5, but yeh…. Could’ve gone a lifetime without knowing that

I don’t think I was ready, y’all. Ugh. I am smarter now but more horrified and also a bit sad.

What fact did this to you? We might as well keep this not-party going in the comments!