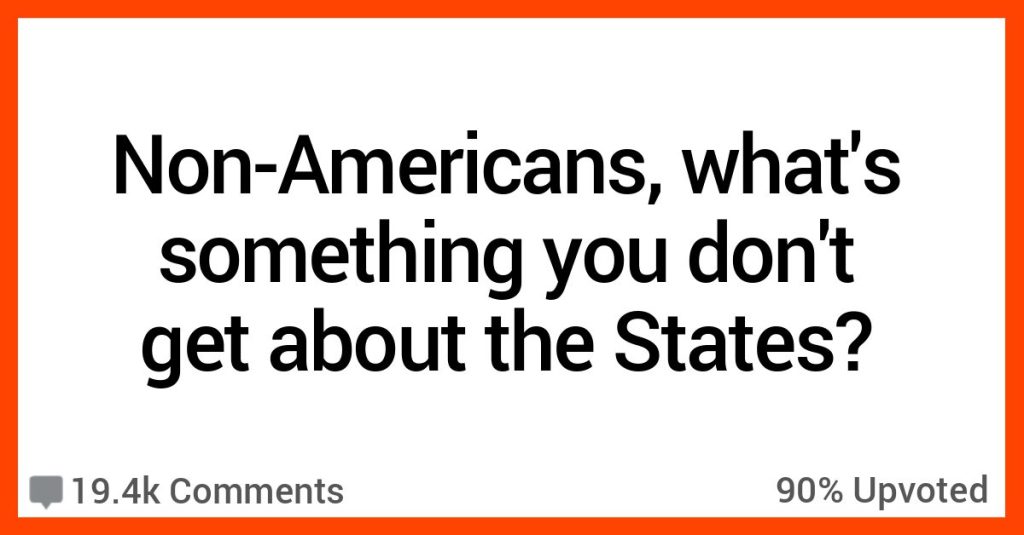 I think that it’s totally normal to have questions about cultures we didn’t grow up in or are completely unfamiliar with – our world views are set from a young age, of course, and it can be hard to imagine something different.

That said, people who don’t live in the States have a lot of questions for those of us who do, and honestly, all 14 of these confusions are totally legit.

why is it that some scientifically proven stuff like global warming or vaccines gets politicized?

13. I think there are more, but they’re not allowed to talk.

Having only two political parties.

Cropped ears on some dog breeds. It literally just looks like they’ve been butchered. I don’t get it.

Literally paying for medical treatment, what if you’re going to die and you don’t have no money? What can you do about it?

(edit, i saw absolutely ALL of your comments, and i’m very sorry for you Americans, i guess it’s not a so good country as everyone think, just a capitalist country)

How big a deal high school sports is, why are full grown adults concerned about a kids playing American football.

Being afraid to go to the hospital because it will potentially bankrupt you.

Biscuits and Gravy. Mywifes whole family loves it, but I’ve been here for 8 years and I just don’t get it.

What i will never be able to understand is this,how can it be completely normal for you people for Amazon to leave the package on your doorstep????

The absolute bulls*%t that is the American healthcare system.

The UK is nowhere near perfect, but at least we don’t charge Odin’s foreskin for an ambulance

5. Because no one gets paid enough otherwise.

THIS and not including tax on retail items so if something is $20 on the price tag, it could be $21.50 when you get to the counter.

Just makes no sense, include it prior so that people can get the change out if they need it. Not such a big issue if you pay by card but still.

Presidential elections- mostly pertaining to the two party system and electoral votes, as well as the controversy around mail in ballots.

I understand the process but can’t wrap my head around why people think these are good or effective practices/ systems when electing a leader of such a major, important nation.

In shops the prices on the shelves are very different to the prices you pay at the till.

There is actually a reason for this one that’s fallen into obscurity. Before the telephone unscrupulous store owners would jack the prices on goods and blame taxes.

To combat this a law was passed that tax had to be added on at the register to promote clarity in pricing.

Tipping culture and privatized prisons. As for tips, they always say “you tip for excellent service” sure but I already chose their restaurant out of 1000 restaurants around, a well service is required otherwise other restaurants will provide it.

As for prisons, it does not make any sense whatsoever.

1. That would make more sense.

the first time I heard the term “gender reveal party” I thought it was a trans thing. Like “coming out” as a trans woman or man.

Yeah, all of these are questions that most of us who live here have, too. Let’s be honest.

What other questions do you have for people living in the States? We can do our best to answer them down in the comments!