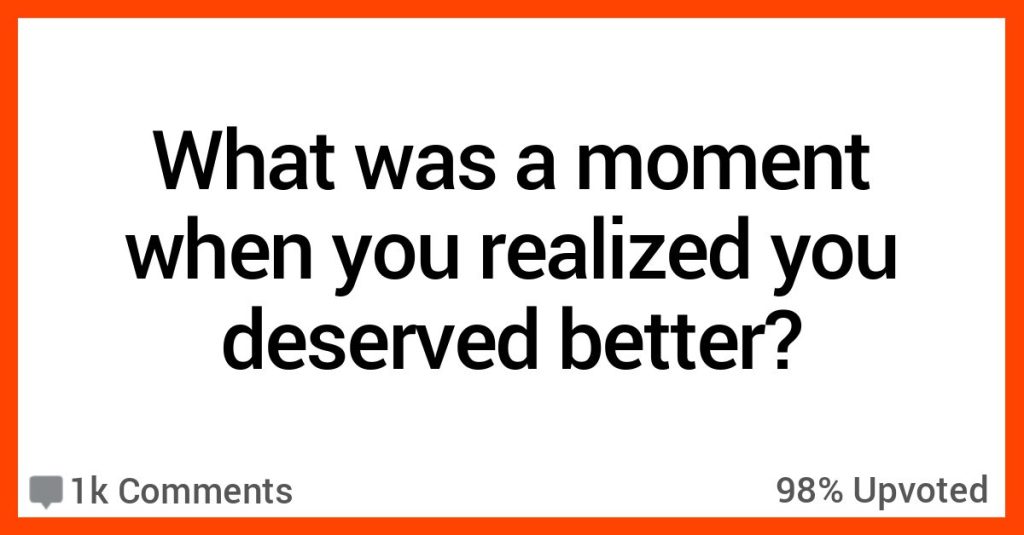 14 People Describe A Moment They Knew They Deserved More

It’s amazing, really, how far we can let things go before we wake up and realize that we’re in a situation that’s not letting us live our best lives. We know we deserve love and respect, but I guess we forget, or we can’t see the forest for the trees.

These 14 people are describing moments their vision cleared and that big, beautiful forest was visible – and they knew with 100% clarity that it was time to move on.

When a friend randomly but frequently came to town for work I dropped everything, drove 25 miles round trip to drive her to dinner when money was tight as I was recently on medical leave and all she did was check her phone for messages from her married boyfriend never once offering to pay for gas, dinner, or drink though she made over 100k per year.

When my ex broke a flower pot on his ex-gf porch during an argument. Like, you’re with ME, why are you so goddamn hung up on her?

Side note: Almost immediately following this breakup, I started dating my now husband and partner of over 20 years!

When I saw my ex speak to someone else the way he spoke to me. I was always able to excuse how he spoke to me by telling myself I probably did something to deserve it, but I knew that our mutual friend did absolutely nothing to warrant how he spoke to her. Broke up with him that night.

When I asked to be paid back for the €50 I lent my friend. Instead of paying me back she decided to make vicious rumours and lies saying I was telling her to kill herself and that I tried to attack her.

That was when I decided the whole friend group, especially her, were shit and I deserved better.

ugh when my boyfriend at the time tried to break up with me for the 2nd time in 2 years.

When I came home and cried after every single shift. Gave the job 100%. I wanted to be the best employee and get recognized for my hard work.

They never gave me a raise (stayed for a little over a year and was only making $9.50) and my supervisor chose the slowest and worst employee to get a bonus and be the employee of the quarter.

There was only 8 of us there and I honestly felt like (not to be too cocky) but I felt like I put in the most effort.

I realized I could be making much more money at an easier job where I would be appreciated.

8. You’ve gotta be able to communicate.

Started dating a guy last Oct, he abruptly ended things via text a month later and didn’t provide an explanation; I decided to give him another chance about a month later.

In March I had a lot on my brain and needed personal space to work through it all. He told me he “saw a bunch of red flags” and ended it again, also via text and w/o offering an opportunity to talk about it.

Terrible communication skills and placing blame on someone going through mental health challenges are a deal breaker for me.

My friends dropped me when I moved away from the city for a few months to recover from a medical condition. When I returned they ignored me despite multiple attempts on my part to reconnect.

I don’t know what happened, all I know is they just never wanted to include me anymore, no explanation, no fight, nothing of that sort.

They never checked in while I was recovering and when a parent almost died, not a single one checked in as well. Took that as a sign and moved on with my life.

I was sitting on the lawn of the guy I had broken up with. (I caught him faking a disease for my sympathy while we were long distance one summer.) He had my car keys inside his house – I stashed it there that summer – and was begging me to reconsider.

I was entertaining the idea because I desperately wanted to leave that conversation and had the thought “I can use this final month to make him decide the relationship should end too.”

Then I realized that I deserved to have what I wanted, which was a clean cut from this a$$hole. And that him keeping my car keys was a big red flag and I couldn’t have been sure it wouldn’t get worse in the coming weeks.

I got up, made his mom give me my keys, and never saw him again.

When I was 19, I was in love with a guy who never asked me to do anything else other than come to his house, and apart from the first time I did, he would always kick me out after sex.

After the second time I was sufficiently upset to block him without an explanation afterwards so that he wouldn’t be able to hurt me again.

I was making my ex a drink and when I went to give it to him, he reached up to trace my cleavage. I instinctively flinched and jerked back, in the way you do when you’re terrified of something.

I was so startled I spilled the drink and the glass broke on the floor. That was the first time I thought about leaving, and the thought surprised me so much that for once I didn’t care that I upset him.

I had realized what I had been in denial about for so long. One small graze of his fingertips did more than the cheating, abuse, gaslighting, manipulation, and putting me down ever did.

I didn’t know who the man I’d given so much of myself to over the last few years was. All I knew in that moment, all I wanted so badly to ignore, was that whoever he was there wasn’t a single bone in his body that was good.

Not only was I trying to push back the fear I felt, but I was swallowing my disgust.

3. What an excellent choice.

In college I had an emotionally, borderline physically abusive boyfriend. The moment I knew I Deserved better was while I was at a robotics competition on the other side of the country.

This was a week long, “stay up until 3 am trouble shooting wake up at 6 to get to the testing area” type of event. I had helped start this club and had spent the better part of two years planning this trip and building this robot. It was probably the moment I had been building up to for most of my college career.

He called me 6 times in the course of one day to berate me on not communicating with him and that I obviously didn’t care about him. Full screaming on the phone. I made up my mind that week to break up with him.

I’m a minimalist, I don’t like to have a lot of “things” really. I also don’t eat candy, I like to try and be healthy.

One Christmas my ex filled the couch with random child toys, like a dinosaur that lit up, a plastic mini ukulele, sugary candies, and a bunch of other things.

It was at this time, two years into the relationship, when I realized he truly doesn’t listen to me or know me.

Then a few months later we ordered coffee, I told him what to say to the person, he says it exactly rightafter complaining is too long to say: “hazelnut cappuccino, wet, with almond milk” Then they give us our coffee correctly, we go on our way.

He then starts screaming about how we need to go on for a refund because that’s not what I ordered, I ordered a “iced mocha”. He literally did not believe that I got the right order, and that they ducked up my coffee.

Not two months after that I left.

After 2 weeks of starting my first job after graduating from university: I decided I deserved better.

I was paid to do nothing. I knew if I didn’t leave, I would kill any hope of having a good career since I wasn’t learning anything at all. I was 21 so I needed to be employable and not be bored

It was August. I applied to another job in October, the process was long so I got the job in March. I started in July. It’s the best decision I ever made.

No regret! I make more money than I would have if I stayed at that previous job. I got to travel a bit for work. I met great people. I like my job. Work and life balance on point. I met my current partner. I can go on nice vacation. I’m saving to buy a flat in 1.5 years. When people how much I make, they think I’m rich (they forget taxes though 😒)

Value you yourself, people. If you don’t, no one else is going to either.

Have you had a moment like this? Tell us in the comments how you knew it was time to move on!