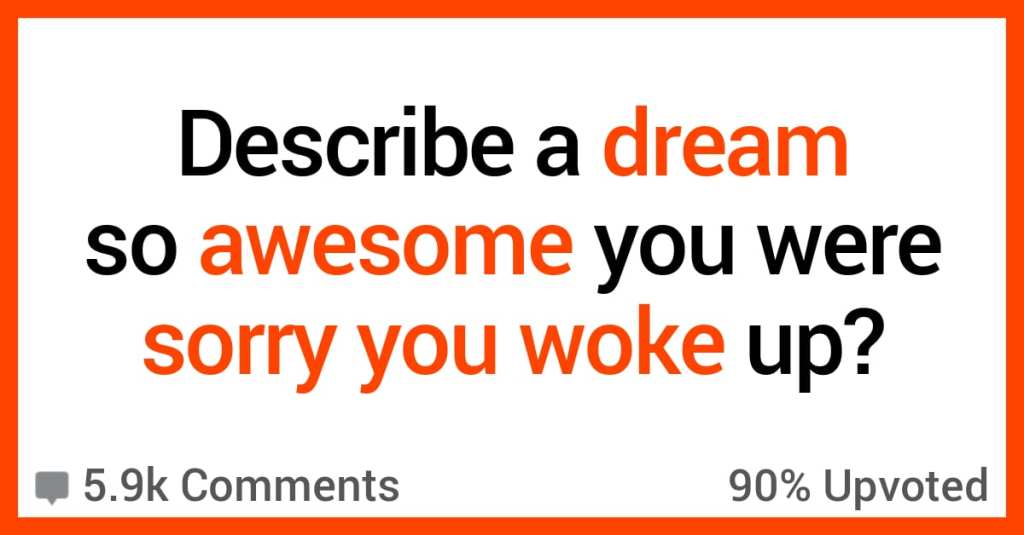 Dreams are fascinating, mostly because our brains are these mysterious organs that honestly, we’re probably never going to full understand.

Why do we dream the things do?

Why can we usually not remember them? What’s up with nightmares?

These 14 people are talking about the opposite of nightmares, though – they’re describing the dreams that were so great, they were sorry to wake up, and that made them try to go right back to sleep so they could have more.

I have two re-occurring dreams, probably half a dozen times each, and every time I wake up mid-“story” if you can call it that.

In one, I have all the powers of Spider-Man, and I literally have to fight armies of demons and orcs emerging from a crack in the earth. These dreams are always AMAZING. Very cinematic MCU-style combat in urban environments against hellspawn, and alongside like SWAT guys and stuff. And they always feel so real.

In the other one, Abraham Lincoln shows up and is flying around like Superman. Once or twice I’ve gotten to ride on his back while he flies. That’s it, that’s the dream. I never know WTF it’s supposed to be about.

13. There’s a story idea in there somewhere.

I have a recurring dream where I meet the absolute perfect person for me, but we are only friends. We always meet the same way but do something different in every dream.

But in my dreams I have a huge crush on said person (just saying I don’t know their name or what they look like) but I can’t tell them because every time I do in the dream it stops and it’s so weird.

It’s not even a lucid dream or anything it just stops. I think I have the adult equivalent of an imaginary friend…

I have a recurring dream about a skyscraper with a self contained city inside of it and the whole thing is riddled with hidden passageways. Total of four times in the past few years. I can’t wait to go back and keep exploring!

11. If you could live there forever.

I had a dream when I was a teenager that I had a daughter named Liliana (I have no idea why that was her name, as my fixation with name came afterwards because of the dream) and I called her Lily and “Lily Pad.”

It was an insanely vivid and realistic dream. When I woke up, I cried for a while because she had felt so real that I mourned her loss.

I still think about her sometimes.

10. These should be more regular! Ha!

I’ve only had like 4 s^x dreams so I wish I could have returned to any of those.

I had a dream I was madly in love with this guy.

Problem is, I’m madly in love irl with my bf. But the love I felt in the dream was so intense that I began to doubt my irl feelings.

It made me really sad and upset for like a day.

The guy in the dream wasn’t someone I’d normally fall for, so all it was very confusing.

8. He should write that book.

I was a detective in the 1960s, chasing a man who killed women while they were home alone – including my wife, on the night I stayed back at the cop shop working on his case.

I found the warehouse he was living in. It was definitely him – he taped all his trophies, the hair of his victims, to the back wall. My wife’s ponytail, her bright red hair, was taped to the dirty concrete wall. I raised my gun at him, telling him it was over.

He smiled at me, a horrible smile with rotting teeth. “It is over. I’m going to wake you up. And when you wake up, you’ll disappear. And I’ll kill again. Perhaps I’ll pay your daughter a visit.”

I tried to ask him what he meant. But then I woke up in my bedroom.

Last night I dreamed I got together with a guy I was in love with for a long time when I was younger. We even had a kid together. It was all so cute and sweet! At one point in the dream I was holding our kid and he was sitting next to me, looking at the baby, and he looked so happy. Then he looked at me, put his arm around my shoulders and was about to kiss me…but then I woke up. I was so mad/sad. I tried to “go back to the dream” (sometimes, when I fall back asleep right away I kinda manage to get back to the same dream) but sadly it didn’t work :((

Next thing I know I was in a sort of old, shady house, and I heard some noises in a room, and when I went inside, I found the same guy there, lying on the floor, beaten and barely breathing. I ran to him and tried to help him, but he wasn’t responding. I was panicking by then. I tried to call an ambulance but couldn’t find my phone anywhere. And then I heard steps approching down the hall and somehow I just knew it was the same person who mistreated the guy I was in love with. Luckily I never got to actually see who it was because I woke up.

In the dream my girl and I are doing something routine and average. Perhaps shopping, or driving in our car, or cooking. It’s always something mundane, but just knowing she is there with me fills me with overwhelming love and joy.

I always reach out to tell her that I’m in love with her; that this small moment, even though insignificant, is amazing to me because she is there, and because we are together and happy. I go to say these words to her but, every single time, all that comes out of my mouth is “I’m sorry”. Just then she’ll turn to look at me and…

… and that’s when I always wake up, startled, sweating, heartbroken. Words choking in my throat. The rest of the day will be gray and hazy, with me going through the ritual of daily life. Smiling when I’m supposed to smile, lest someone asks the question I dread most… is something wrong.

A decade of enduring that dream now. She’s gone forever and I’ll be cursed with that dream till I die, I think.

I hate dreams that feel so real you have to check if they actually happened.

I lost my hair tie and in a dream i found it and put it on the bed side table.

I had to check in the morning to see if i had actually found it or if it was just a dream.

This happens to me. I can’t stop thinking about this one made up world and dream and it fills me with sadness thinking about the life I’m not in. Where we are doing something so bland yet just company of each other is fulfilling. And every time you want to speak, the second you do, it’s time to wake up. And that deep sorrow of the Neverland weighs down on you.

3. Maybe it will happen.

Ok I had an extremely similar dream today. There was this long, boring prologue about me working with a group to carry some surf boards to the top of a rocky hill, but after that the group I had been working with went home to rest. I went to bed, and I was half-asleep within the dream, when this beautiful girl walked into the room and started folding some clothes on my bed (the bed was a queen size). I think the dream wanted me to believe that she had been part of the group I had been working with earlier, because supposedly folding clothes was some sort of wrap up of that job.

Anyways, she lay down on the other side of my bed (since we were in the same group) and fell asleep. I then suddenly obeyed this urge to ask “Can I kiss you?” It startled her awake, and I guess I got upset that I had upset her, because I got out of bed and complained a bit about my impulsiveness and so on. I look back at the bed, and she’s there looking at me, and asks me if I want to kiss her. I rant for a bit about how I don’t deserve it because I’m having a very difficult time thinking nowadays (which is true in real life) and that my head is spinning and yada-yada. After a bit of back and forth, she ends with “You can still kiss me.”

At this point, I decide to give in, and I dive in to kiss her (as does she towards me), but I only got to brush her lips before I essentially woke up. What surprised me was how real it all felt. All of her movements, her appearance, everything was so subtle and realistic that I wonder if I had actually shared a dream with someone in real life. There were some inconsistencies of course, but I don’t think I’ve ever had a dream feel that real.

I nearly check mated Kasparov in a chess game, just to be woken up by the alarm.😔

1. Who wouldn’t want to live in that dream?

Me and lego gandalf fight ghosts with axes.

Those dreams can be great, but they can make reality all the more crushing, too.