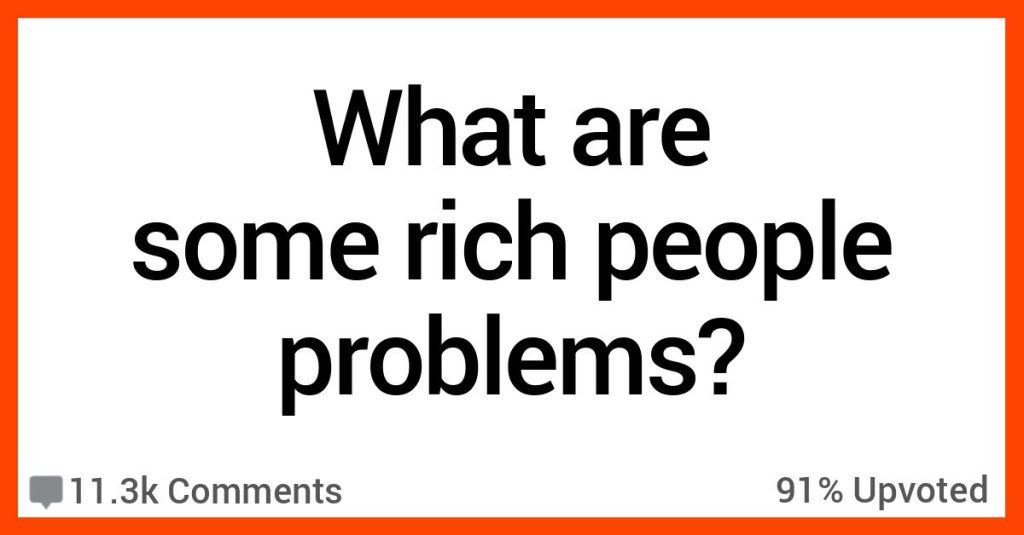 14 People Muse On What Problems Are Unique To The Rich

Everyone in the world has problems, y’all. Whether you’re rich, poor, or somewhere in between, there will be a specific kind of problem that people in the other categories will just never be able to grasp.

That said, most of us will never fall into the “rich” category, so it can be fun to hear about the types of things they consider “problems” – though I will say after reading through this thread and 14 answers that some of these are a bit sad.

14. Why not just leave it to charity?

My rich friend has no kids so he’s trying to figure out how to spend all his money before he dies so it doesn’t go to some cousins he doesn’t like.

If I just mention something I like, he’ll buy it for me immediately. It’s ridiculous.

13. That people actually need the money.

I had a friend who was rich, and she hated venmo-ing each other when we paid for meals and things. For her, it was inconvenient and pointless – we could just take turns or something.

For me, I needed the reimbursement right away because I was strapped for cash. It never even occurred to her.

My husband has a rich acquaintance who was just agonizing about buying a $5-million yacht (which will probably be used a handful of times a year), so he decided to buy only a $3-million yacht instead. I can’t wrap my mind around it.

11. Is she supposed to wash her own dishes?

I gave swim lessons to a woman who complained that the dishwasher on her yacht was broken.

10. An abundance of fake people.

My boss is a pretty significantly wealthy guy, and his family in general is very wealthy and looking in from the outside when he’s in his venue drinking with people, there’s definitely a problem of people taking advantage of being your friend for freebies and privelage over your staff.

Cannot imagine going through life with that many fake people trying to get something.

I was fixing some IT stuff at a billionaire’s home and was having a coffee in the kitchen with his wife and having a chat. Their house is waterfront position, Lake Geneva (lac Leman), Switzerland. It was a beautiful afternoon and I said “It’s a perfect day for a swim in the lake.”

She replies ” You swim in the lake?!” “Yes, it’s lovely” “Isn’t it dirty?” I reply “it’s probably on of the cleanest lakes in Europe”

Brief pause….she replies ” I’ve lived in this house for 14 years and I haven’t swum in my own swimming pool.”

8. Everyone wants a piece.

All your poor relatives move close to you and start asking you for things and money.

I thought the moochers would be subtle or ask for small things or maybe just hang around in hopes of getting some scraps, jackal style. Uh, no.

Everyone from siblings down to the ex boyfriend of a 2nd cousin will just straight up demand that he buy them a vacation home or pay for their $80,000 around the world cruise (both real examples), and when he inevitably says no, they go scorched Earth policy on social media and talk about how selfish he is and how he disowns his own family for money, and then a month later they are back begging on the doorstep. It’s exhausting, and I’m just watching from the outside.

7. It can be hard to find friends.

Feeling like you can’t talk about certain things with people who don’t make as much. I’m not “rich” but I make more than some friends.

There have been times when I’ll tell them about something and I get a sarcastic “must be nice” reception.

“Lifestyle creep” — the more money they earn, the more they spend, and it never feels like they’re truly “rich.”

5. A feeling of isolation.

There’s a lot of isolation that comes with wealth, particularly if your wealth goes up more than your friends. It’s minor at first and not such a big deal but over time the gap becomes bigger and bigger and it can start to become difficult to bridge that gulf. When you’re younger, you might have been able to afford a small house when your friends, who are also doing well but not quite as well are looking to buy an apartment. A few years later and you live in a bigger house, in a much nicer neighbourhood than them. It’s not that different but your friends tend to come to yours more and often comment about how nice where you live is. You’ve known these guys for years, after all.

Some areas of conversation have gradually moved off the table. Your stresses and successes at work are going to be different to theirs. It’s lonely at the top in companies as most people don’t understand it. Why would they? It’s stuff you only really ‘get’ with experience. You do your best to talk about their work worries but while you used to get it, it’s starting to become hard to stay interested. Interpersonal work dramas aren’t the same anymore. They seem so minor compared to the weight of leadership and livelihoods that you feel. So you don’t really talk about that stuff anymore. Which is fine, there’s lots of other stuff you have in common.

Except, the overlap in interests starts to lessen. Some of your interests have crept into higher income things. You used to go on similar holidays but now you’re going further afield and having more luxurious holidays because you work hard and only get so much time off so why shouldn’t you spend your hard earned money on yourself? Maybe you used to like to talk about cars but now it’s a bit awkward talking about the car you’re looking at getting because it’s more than the house deposit your friends just spent ages saving up for. Ok, maybe gaming but you’ve got the latest console or computer because you got it on launch without batting an eyelid at the price and you can’t play the new games you’d like with them. Little areas of your commonality is gradually getting chipped away.

Then the big gulf is when you have kids. Maybe your friends have had kids too. After a while, it sinks in that your kids are going have a completely different experience growing up to your friends’ kids. Just because they’ll be growing up in a much wealthier neighbourhood. It doesn’t matter how much you’re going to try to keep them ‘grounded’, they’re just going to have way more opportunities. They’re going to go to a better school, interact with much more affluent families and generally grow up in a completely different lifestyle. They’re probably even going to talk differently. You might still feel like you’re not that different from your friends but your kids are probably going to be very different to those of your old friends.

Eventually, you grow further and further apart from your old friends. You make new friends in your neighbourhood or other parents from their school. It all feels a little bit forced and not as natural as you used to be with old friends. You still meet up with them maybe once or twice a year. Most of your time together is spent reminiscing. On the whole, you’re happy and comfortable with your life but you still really miss your old friends and the good old days.

4. You have to pay attention.

THIS. I am NOT rich but As I make more money, grow my business I have to actively pay attention to spending. You have more you end up spending more.

I see it a lot when working for oil and gas customers. Dudes making 6 figures for the first time in their life but are cash poor because all their money goes to financed vehicles and toys lol.

They need 6 figures just to live paycheck to paycheck. When the bust comes and they don’t have the overtime and the bonuses they’re hurting.

Figuring out how to give your kids everything they want without turning them into spoiled brats who are messed up for life.

My mother married a wealthy man with some VERY wealthy friends. One friend in particular comes from a large old money family that over the years had become very suspicious of outsiders trying to marry in for $$.

Their solution was to marry within the family (lots of cousins marrying each other) and so they began having issues with inbreeding and children being born mentally disabled because of it.

See, just because you’re rich doesn’t mean your life is a picnic, y’all. But it’s still easier than mine!

Do you have access to rich people, or are you one yourself? If you’ve noticed a rampant problem that’s not mentioned here, drop it in the comments!