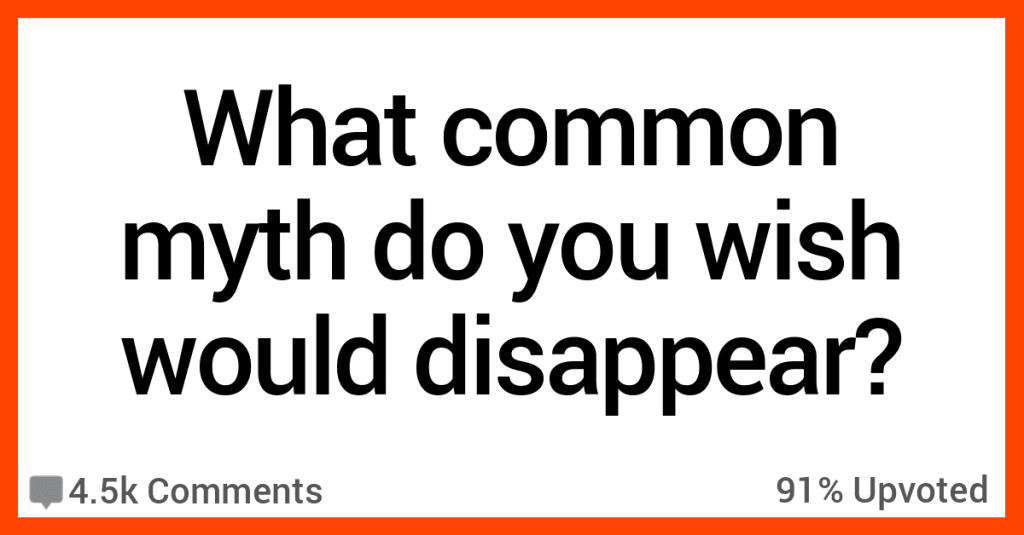 Sure, myths aren’t true, but that doesn’t mean they can’t hurt people (or things). If people are operating under false assumptions, they could do something – or not do something – that could have had a lasting positive impact on someone else or the world around them.

It can be hard to rip out a myth once it’s really gotten deep in society, but these people really think that, when it comes to these 15 untruths, it’s definitely worth a try.

Msg is bad for you.

I had someone tell me they were deathly allergic to MSG literally while eating a bag of Cheetos. Monosodium Glutamate is an ingredient in Cheetos, and not even the last one.

I’m not sure where the whole thing started, but MSG is fine. It’s just a flavor enhancer, like salt.

14. He was just exceptional.

That mr Rogers was ex military and thats why he wore a sweater due to sleeve tattoos and was so calm with kids.

Maybe he was just paying attention to their needs and cared about his perception to them.

That only stupid people get involved in cults or fundamentalist religion.

Cults and fundamentalist religion works because they indoctrinate people and manipulate people’s weaknesses. It’s not purely about intelligence.

Blood is blue when it’s inside your body.

In fact, I think Autistic people can feel TOO much, that is why they can go into overload sometimes.

That someone with ASD/Autism is some savant superhuman in one specific subject. This is portrayed A LOT in media, most characters inserted into stories who have Autism turn out to be some genius mathematician or expert musician or some other shit.

I think it perpetuates a really detrimental stigma towards the demographic, expecting others to have some niche super power has some sort of “trade-off”. As though that person needs that magic quality to be a redeemable character.

That NASA spent millions to design a pen to work in zero gravity and that the Russians just brought a pencil. HUR DUR DUR AMERICANS SO DUMB. Graphite is electrically conductive and would short circuits.

For anyone wondering; both the American and Soviet space programs originally used grease pencils as writing tools. An American company then invested about $1 million USD into developing a ballpoint pen that would work in zero gravity, eventually getting a patent for such a pen in 1965. NASA adopted the Space Pen in 1967 and the Soviets did so as well in 1969.

Musk didn’t found Tesla. He just gave its founders a lot of money, enough to become Tesla’s chairman, and then pushed the founders out.

Even saw him referred to as Tesla’s founder in an article about the potential Hertz deal the last couple of days.

Very early huge investor, yes, but not really a founder.

That you can get a raise and wind up with a lower net income because of the tax brackets.

6. Our parents are just trying to keep us safe.

That you can’t drive barefoot. It’s not illegal anywhere in the United States and yet so many people think it is. It’s such a strange thing to think is illegal.

To be fair, when I was learning how to drive it did mention somewhere in the manual that it’s dangerous to drive barefoot. That may be where the myth is getting perpetuated so I really can’t blame anyone for believing it.

5. Go ahead and talk about it.

On the topic of money, that employers can ban you from talking about your pay. They can put it in your contract all they want, but its not enforceable and they cant legally do anything about it if you discuss pay with your coworkers

(In the US, not sure about other countries)

That black cats are evil. No truth there.

That you need to wait 24 hours before reporting someone missing or that the police will not start searching until the first 24 hours is up.

2. You can cut your family off.

You have to keep in touch with your family, even if they are toxic, because they are “family.” Nobody loves you like your mother or father. This can lead to trapping people in abusive and toxic relationships for years because there is no societal or cultural support to escape or go no contact.

Like someone else has said on here before, you only get one appendix, but if it goes bad you cut that sucker out.

1. Believing them could literally kill you.

Moss grows wherever has the best conditions.

Animals can survive eating things that we can’t.

Not all civilisation is downstream.

All weather is specific to certain locations, so sunset colours tell you nothing if you don’t know local conditions.

Most importantly, so much of the folksy bullshit is northern hemisphere only, often American only – you can’t navigate with the north star when you’re south of the equator, and the sun is on your north side there too.

Yes! All of these actually drive me nuts, too.

I know there are more myths you can’t stand. If your personal pet peeve isn’t here, lay it on us in the comments!