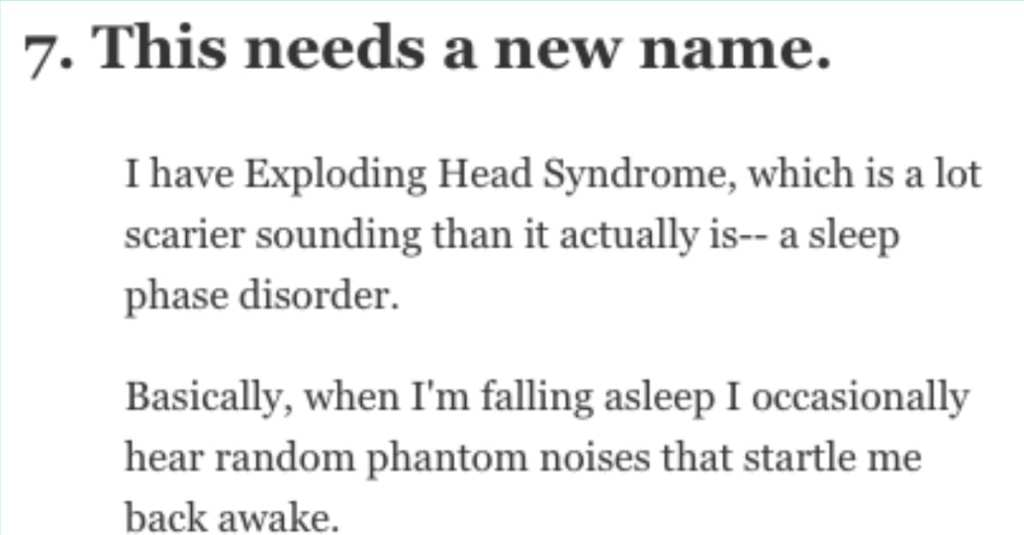 Once we pass a certain age, I feel like nobody’s body really works quite right anymore. Things ache, you can tweak them without trying, and honestly, it never really feels good to move from a sitting position ever again.

What’s funny is how we just accept that’s how life is now – like these 14 people, who barely even notice the weird things happening in their own bodies anymore.

I don’t feel dehydrated even though I am. When I was a kid, I’ve gone whole days without drinking anything.

I’ve just learnt to force myself to drink water every hour. Until I developed this routine, I never understood how my lips were supposed to feel like as they were always dry.

13. Fingers crossed on the synthetic insulin issues, though.

It’s really annoying but what can you do? 🤷🏻‍♂️

will just randomly get a huge chill which looks like a mini seizure.

11. This sounds a lot dirtier than it is.

“Voluntarily Piloerection” or to put it more cooler, I can raise my hair i.e. Have goosebumps at will.

It’s apparently rare but seeing the amount of people saying they have it too, you should get in contact with James Heather who is researching about the same

I get ocular migraines sometimes.

They’re not terribly frequent, though maybe once in a while they’ll be persistent for a week or so. It’s a strange experience. No pain, no headache, but an actual blind spot develops in my vision, that ‘appears’ sort of like a lightning bolt, it hovers there for about 20-30 minutes then gradually subsides. I’ll tend to feel a bit weird for maybe an hour or two afterward but then back to normal.

They seem to be triggered by a combination of poor sleep, dehydration and (maybe) caffeine + stress. Have had them off-and-on for about 10 years probably. Consulted with a couple doctors about it and they’ve said it’s probably nothing to be too worried about unless it starts happening more frequently/intensely.

I have spinal stenosis, basically my vertebra are thickening and pressing against my spinal cord in my upper neck and lower spine.

It causes numbness in my extremities and I have to do special stretches to help relieve the pressure but man sometimes I’ll sit for a little bit too long and it’s like my feet don’t exist. I’ll try to walk but it’s like walking on stumps.

Back to the stretches and within 10 minutes the feeling returns. I use to do 100 mile bicycle rides, now I’m lucky if I can walk three blocks without tripping and falling.

I can control my pinky toes separate from the rest of my foot.

Never thought it was weird until my mom was like what the fuck and apparently most people can’t do that.

I have Exploding Head Syndrome, which is a lot scarier sounding than it actually is– a sleep phase disorder.

Basically, when I’m falling asleep I occasionally hear random phantom noises that startle me back awake.

For me, I most commonly hear someone shouting my name, an unintelligible brief yell, knocking on the door, or the doorbell.

I’ve noticed over the years that it tends to happen mostly when I’m overtired and/or anxious, and I may not have one for months and then have them every other day for a week.

I get sharp intense pains on the left bottom side of my ribs randomly. I just suck in air and hope my rib didn’t puncture my lung. Sometimes its when I’m working out, but sometimes I’m literally just standing there and whoops popped a lung.

I’m 18, and have been experiencing these since I was 15. Happens whether I breathe in or out. Hurts like hell for a minute and then passes, I mainly breathe in more air to stop myself from screaming.

I’ve never seen a doctor for it because I saw a post online saying that most teenagers experience this pain because “our ribs are growing”. Don’t know the medical truth of that but whatever it calmed my tits and made it easier to live with.

5. Middle school me called this “gleeking.”

Sometimes when I yawn saliva literally squirts out of my mouth.

No idea why, it’s kinda weird.

4. Only if it’s a really good stretch.

When I yawn and stretch I become blind for a few seconds, don’t know if thats normal

3. Brain stuff totally freaks me out.

I have neurological issues that make me have “phantom” feelings.

For instance the last two days I’ve had a burning sensation, like if I‘d rested a hot soup bowl on my thigh, but there’s nothing there.

It can feel like little bug bites, scratches or “streaky” burns. It’s never severe, mostly just weird to feel a distinct sensation for no reason.

Sometimes I’ll ask a family member to check for marks.

The other day I pulled up my shirt, turned around and asked my mom if there was anything on my back.

And we were both so weirdly delighted I’d actually been mauled. lol

2. I guess it would seem normal by now.

I was born with a disorder that makes crossover motion between both sides of my body more challenging. Riding a bike took me a year to master, for context.

The hardest thing for me to do autopilot is stairs, though. If I don’t think about it, my body automatically goes one at a time with both feet rather than alternating.

Normally avoid sun exposure due to not tolerating heat well and skin cancer running in the family.

But earlier this summer I spent quite a bit of time in the desert. I got several shades darker, except for a bunch of random spots that are still white.

They weren’t covered and had the same amount of sun exposure as the rest of me, but just no color change at all. Biggest spot is on my bicep but there are random spots everywhere.

I’ve always had a streak like that along my hairline (hair also grows in white there too) that my mom said was a birth mark. I’m guessing these “new” spots have always been there too but never apparent because I avoid sun exposure.

No one warned me it would be like this, y’all – why does my back hurt?

What does your body do that you’ve just written off with a shrug? Tell us in the comments!