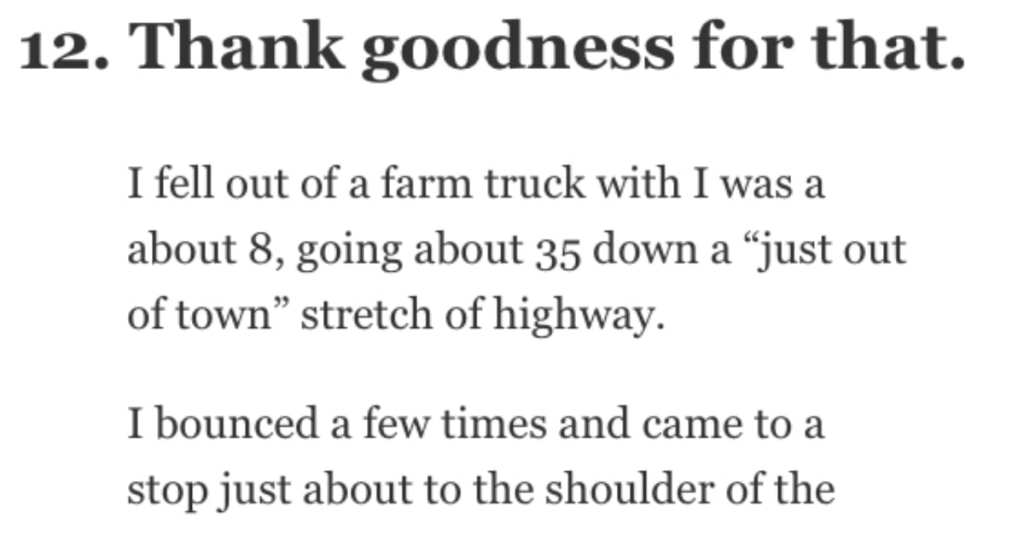 14 People Recall the Near-Misses That Probably Saved Their Lives

You hear people talk about being in “the right place at the right time,” but of course that means some unlucky folks are in “the wrong place at the wrong time.” People get hurt (emotionally and physically) all the time for no other reason than they happened to be standing somewhere they shouldn’t be.

And sometimes, fate intervenes and those tragedies turn into near-misses – and these 14 people are here to tell the tales.

14. Things work out how they should.

My high school sweetheart and fiance was my bullet.

He ghosted me out of nowhere, no explanation…just gone. So needless to say, no wedding. I sent the ring back to his mom cos I didn’t want it and was pissed. I go on to live a great life, find a wonderful guy and we have been happily married for 21 years.

25 years later I find out that my old flame had been arrested for underage solicitation, sexting underage girls, possession of child porn, and many charges of sex with minors. Apparently Mr Big Man in his Community was arrested in a sting operation after this 12 year old girl’s parents found a whole series of explicit texts and had found that he set up a “romantic” hotel room get-together for them. Police pretended to be her and he was caught in the parking lot of the hotel. Even better, he was married to the same chick he was apparently seeing while we were together, and had a couple of kids. All around the same age of his victims.

Yeah…before finding all this out, I regretted for a long time that we didn’t work. After finding out this had been going on for at least 20 years…I was rather glad i got ghosted!

Never been so glad to dodge a bullet….

13. Faster than the speed of sound.

I survived a rocket attack that landed about 10 meters from me, very close to where we were standing.

We were so close to the launch site, that the warning alarm came AFTER the rocket had already impacted.

Thankfully, we were able to dive under a vehicle for some shelter and the three of us made it through unscathed.

12. Sends a chill down your spine.

My high school sweetheart ended up marrying the girl he dated after me. He was the murderer in their murder-suicide several years later.

I don’t necessarily feel like “that could’ve been me,” but I do wonder how different our lives would’ve been if I’d stayed with him.

This was years ago but I’m still very sad for him that he felt whatever led him to do this.

11. So many of these stories don’t end well.

I can answer this in a literal way. When I was a child, I was playing video games with my little brother.

Well, he found our dad’s gun and fired it.

No one was hurt but it scared the sh%t out of me.

Junior year of college I was planning to get up at 6:30am for an 8am economics final. I wanted to give myself enough time to come to, get a decent breakfast and do some last minute reviewing.

Instead of my alarm clock, an ambulance siren instead ends up waking me up. I look at my clock, 6:35 am. I had done the classic ‘set the alarm for PM instead of AM’.

Even through I had a buffer of 90 minutes, I would have most certainly overslept as that whole semester the earliest I had a course normally was 10am

9. Had a sinking feeling.

Had a teacher in high school who was wicked sarcastic and witty, while also being a hard-ass grader. To me, the perfect teacher: class was challenging but we were all laughing and having a good time.

He was a great mentor and I continued to visit his class even after I graduated. One time, post graduation, I was sitting in his office and I had just given him some art to decorate his classroom with and he was so excited he blurted,” I could KISS you!”

Something about the intense eye contact unsettled me, but I laughed it off (17 y/o girl, what can I say).

Couple months later, he was arrested for having a sexual relationship with an underage student.

When I was in middle school I wanted to buy a fedora, but none could fit my head.

7. The future can surprise you.

I interviewed for a job that I wanted desperately in August 2019. After the initial phone interview, I went in for an in-person interview at 4PM on a Wednesday.

I had a rejection in my inbox by 8PM and was completely gutted.

Then 2020 happened, and they laid off 60% of their staff and will probably go under. I’m thankful for that rejection every day.

6. I hope she learned her lesson.

Not my story, but a girl I knew had had a few drinks and decided to hitchhike home, a town about 40 min away from the one she’d been drinking in. Note- it is very common for people to hitch hike in this area.

She gets picked up by a car of guys, all seems fine until she points out they can drop her off just up ahead, and they keep driving. She had that ‘instant sober’ feeling. She plays it off like she’s clueless and totally down to keep hanging out with them, acting like she’s very drunk meanwhile they’re back in more forested area of the highway.

Then she fake dry heaves and says she about to puke, really putting on a show so they stop to let her out. She books it into the bushes and just doesn’t look back until she’s safe.

There was a pile of stuff that people would leave at our house when I was at university, coats and stuff. Moving out day and we found a random samurai sword in the pile. We were messing about with it trying to make it go “swoosh”.

I was stood facing my brother while he was swooshing it when the blade dislodged from the handle, flew straight past me and stuck horizontally into my headboard.

So yeah my brother nearly impaled me while messing around with a random sword we found after a house party.

Getting chased by someone with a knife across my apartment. I closed my door at the right moment so that person ended up stabbing my wooden door instead.

The mark was there until I left the apartment a few years later as a constant reminder of what could have been.

When my great aunt passed away I was helping to clean out her house.

I’m just dragging everything out of the basement and suddenly my dad is like, “Whoa! Put that down gently and let’s move away from here.”

So I put the weird metal tube-type thing I’m carrying down and get out of there. Turns out it’s a mortar shell from when my aunt worked in a munitions factor during WWII.

Bomb squad came and took it away.

At 17 y/o I met and married a sweet little North Carolina daddy’s girl.

had I not I would have still been hanging with my friends that just discovered heroin.

My mother left me in one state and went back to my abusive stepfather.

She tried to get me to drop out of my senior year at hs, move back to their state and just get my ged (they wanted a live in babysitter, cook and maid)

I was so lucky my grandparents let me move in with them and finish school.

My heart was in my throat just reading these, my goodness!