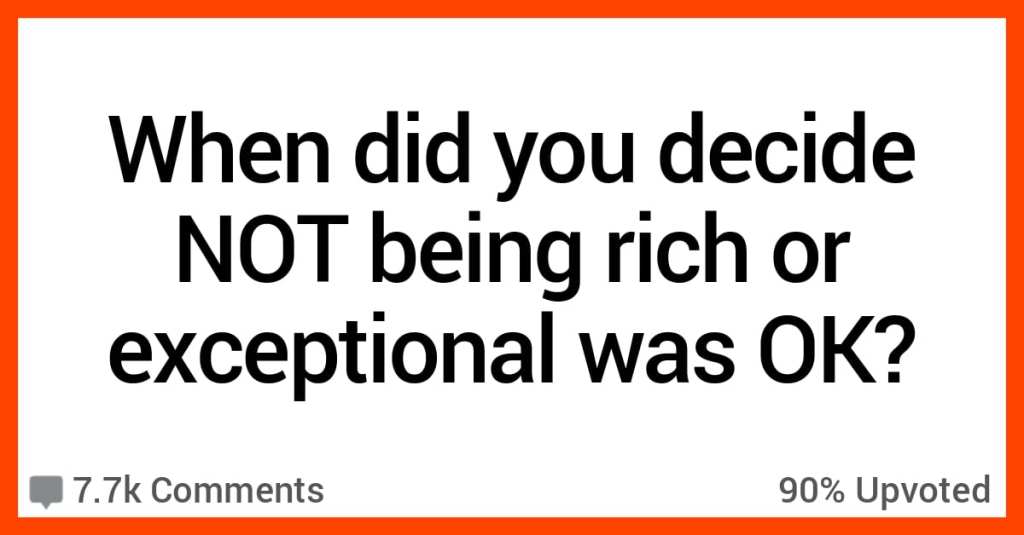 14 People Share How And When They Accepted Their “Average” Lives

It’s natural for younger people to dream of all the riches they’ll wring from the world when they have their chance to grab it by the throat. We all want to make a difference, to be remembered, and sure, to make a load of cash while we’re doing it.

The truth is that the word is called “exceptional” for a reason – and that’s that the majority of us will never come anywhere close.

We all have to accept at some point that we’re never gonna be rich and famous, and these 14 people don’t mind sharing when that moment came for them.

I’m a recent college graduate who used to have huge aspirational dreams, but I think I’m quite content with a “menial job” if that means I can pay for what I need to pay for and live my life how I want to.

13. The system is stacked against you.

When I was a kid. I was born poor. Grew up poor. Saw how damned difficult it was to just go from poor to not poor; much less from poor to rich.

I volunteer at a food bank relatively frequently. The women who work there are very sweet, but they don’t get paid very well. My mom told me “you’d better get into a good college or you might turn out like one of them.”

What do you mean? Turn out happy? Help people for a living? Make enough to support myself while having free time to do what I want?

I was born poor too. Im so sick of the “hmm do we pay rent or the car loan or food+heat” life.

Happiness rises with income up to about $80k -ish for the household (location relative). Which is ABOUT the point of “financial stability”. That there I think is my personal goal.

I dont want to be rich, but Ive always dreamt about what itd be like to have “enough”.

When I decided the only thing I care about is playing music and I wanted to do it for a living.

When I first moved out of home and realized that my Bachelor’s degree doesn’t mean SH%T, because I’m now living like people who’ve never went to college in their lives.

I’n still in high school, I’m a gearhead who wanted to own several cars. Then I realized I’m not going to be a doctor or an engineer.

I realized I’ll just buy one of my dream cars that will never be a headache to find parts for.

And I also decided I’ll become a journeyman mechanic because my welding teacher really showed me that working in the trades are not something to be ashamed off.

7. Dogs are better than people.

I work with dogs for a living. I make enough to pay my bills, but I’ll never be rich. I’ll never own a home of my own without roommates. One of my biggest pet peeves is the fact that people often shit on me for having a “menial” job. They basically call it a cop out. It’s too easy, I’ll always be poor, why don’t I find something better..

But I wake up every morning not dreading going to work. I don’t fantasize about strangling my boss because she’s flipping awesome. I don’t come home completely stressed out and hating life because I’m stuck at a job that I hate with people who annoy the hell out of me. A bad day with a dog is still better than the best day with humans.

“It must be nice to go to work at 10 and be home by 3,” my roommate regularly scoffs.

When i realized i couldn’t do Mathematics worth a sh%t.

5. We make our own happiness.

As a matter of fact, as long as your basic needs are met, your happiness is solely up to you, and no amount of money will change that.

This is called the hedonic treadmill

If you’re unhappy at $80k a year, and you get to $120k, you might feel superficially good for a little while, with your better house and new toys, but then you’ll get used to it and feel just like you did when you were at $80. Rinse, repeat.

Since I was a kid. I have never had an expectation of becoming rich.

I mean I fantasize about winning the lottery but its a fantasy.

To actually become rich and work for it? Never. I am not smart enough for that.

I’m in the same boat. I work in an animal shelter.

The pay is crap, but I benefit from the fulfillment it brings.

I’m the kind of person that gets depressed if I feel my daily work is meaningless, so the feeling that I’m making a difference for animals and people is worth it

Though if anybody calls working with animals “easy”, all of the bruises, bites, scratches and emotional scars I and my coworkers have sustained would like to say otherwise

2. Wealth has its own problems.

Being rich is a nice fantasy but going through the grind and bullshit to become rich never appealed to me.

Like if I got lucky and somehow came into a shit ton of money I wouldn’t complain.

But I have no desire to work myself to death for some goal of being able to buy a mansion and 5 sports cars.

All I desire is enough to get by without worrying about how to pay the bills.

There’s more to life than money.

I’m 39 and I’ve just come to realize I’d rather have an easy life than be stressed beyond belief because I’m thinking about work all the time.

Keep living the dream for as long as you can.

I think one of the greatest gifts a person can give themselves is just to be satisfied.

Harder to do that to say, I know.

Tell us what you think about this topic down in the comments!