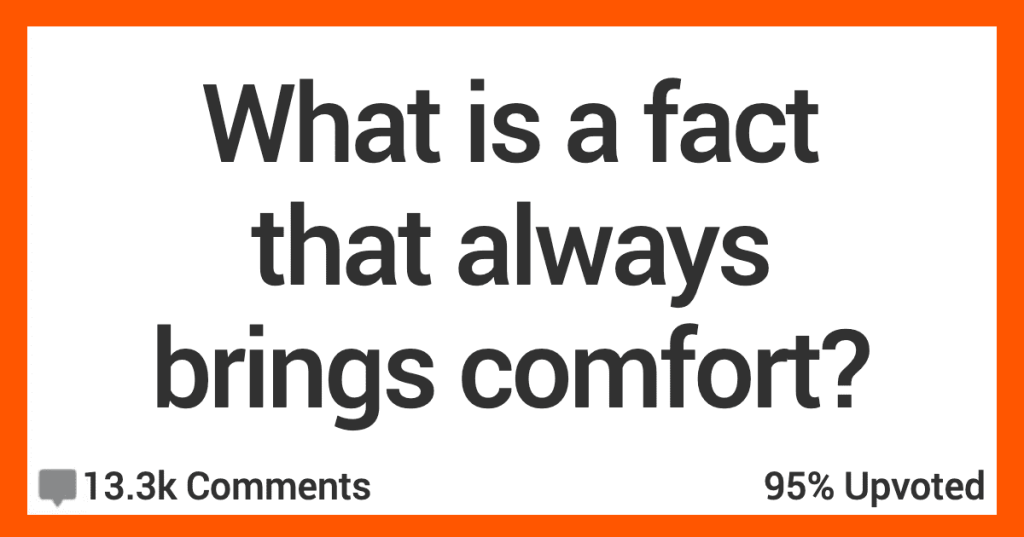 One of the coolest things about facts (at least as far as I’m concerned) is that there are facts for absolutely every occasion. You can impress your friends, you can learn new things, you can follow them down rabbit holes, you can horrify yourself – or yes, you can find comfort in the small truths around you.

This list of 14 facts is full of comfort, so I hope that’s exactly what you’re looking for today.

Nobody pays all that much attention to you. Everyone is the main character in their story and thinks you’re just another supporting role or an NPC.

I find this very freeing.

My city has a no kill shelter, the animals have nice beds, and get walks. People come and read to them.

The cats are all together in a big area with toys and scratching post, people come to pet them.

There is a type of mold growing on/around the Elephant’s Foot in Chernobyl.

This mold eats radiation, and the radioactivity of the Elephant’s Foot has decreased drastically since the mold started growing there.

idk, it’s just comforting to me that the planet can heal no matter how bad the scar we left.

Cheetahs are very shy animals. So some zoos give them support dogs like those for humans. Its the cutest thing ever.

The bigger reason for this is that cheetahs vision likes to hyperfocus. In a crowd like ones at the zoo, they would get anxious looking at each individual and would try to analyze each person, which can be very stressful for them. Dogs are VERY good at reading groups and crowds. They pair a dog with the Cheetah to rely on emotionally. If the dog is calm, the cheetah will trust them that there’s nothing to worry about from those crowds.

How zoo prevent the cheetah from killing the dog?

They’re typically introduced at a VERY young age and imprint on each other. Cheetah’s are also not naturally driven to kill dogs as prey. A cheetah could kill a dog, but typically a cheetah would never hunt a dog in the wild.

If it was in its territory, or if a dog appeared hurt and by itself, a Cheetah might go for an opportunistic kill, but those are special circumstances. The most likely situation you’d see in the wild would be if they were hunting the same prey and they fought over a kill.

Switzerland has implemented a scheme ‘Time Bank’; which is an old-age assistance programme, under which, people can volunteer to look after the elderly who require assistance, and then, the number of hours they spend with or caring for seniors gets deposited in their individual social security account.Eventually, when the volunteer reaches that old age when he or she requires support, this ‘Time Bank’ can help them by providing time-based services which include consultations, babysitting, hairdressing, gardening, tutoring, or any other time-consuming job in addition to being looked after by a volunteer as well.About 34 countries are trying to apply this scheme.

Most seahorses are monogamous and mate for life. Young seahorses actually go on “dates” with their prospective partner before settling and starting to procreate.

It’s a comforting fact as it’s been studied extensively and will not impact earth that day.

There’s a place in Japan called “Capybara land” where you can hang out with capybaras and see them chilling in hot springs.

5. This is totally true!

Humans can hear each other smile through the phone through differentiating vocal intonation between smiles and non-smiles.

Sometimes dogs in movies have to have CGI tails because they keep wagging their tails. They are just so happy to be there!

I heard that in the movie Cujo, the actor dogs (more than 1, I heard) had to have their tail wagging edited out because doggie was being a good boy.

This past year there has been a massive breakthrough on SIDS research.

Meaning in the future we may be able to detect SIDS in infants and possibly avoid as many infant deaths.

India’s tiger population grew from 1,411 in 2006 to 2,967 tigers as per the 2018 census. Based on the best available information, tiger populations are stable or increasing in India, Nepal, Bhutan, Russia and China.

But much more work is needed to protect this species if we are to secure its future in the wild.

Your pets will forgive you if you accidentally step on them.

Probably because of the human apologizing attention the dog gets after being stepped on.

There you have them – don’t you feel better now about the world in general??

What’s a fact that always brings you comfort? Please share it with us in the comments!