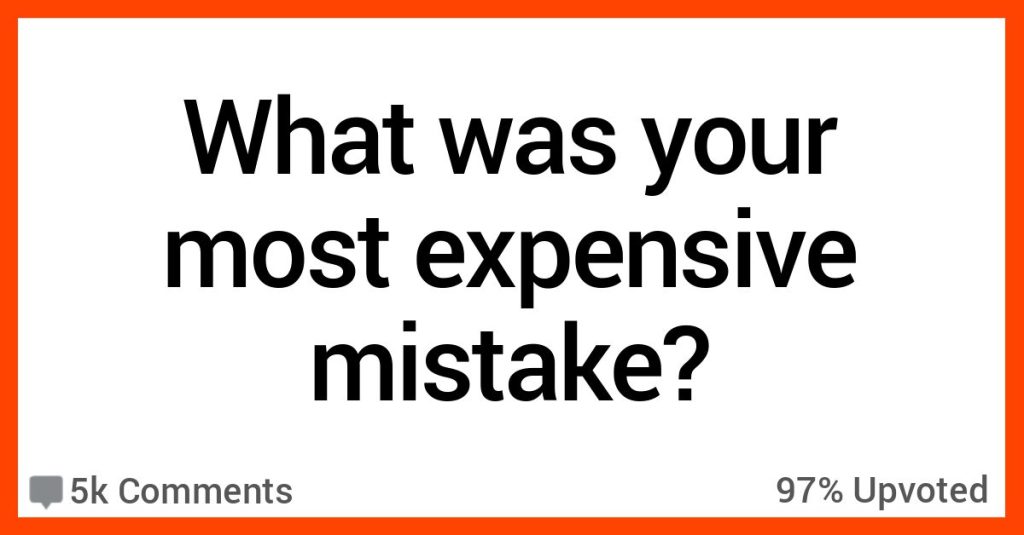 One of the hard truths about being human is that you are going to make mistakes. Some are big, some are small, they should all teach us lessons but occasionally those lessons are really, really rough.

Like these 14 errors, that cost people more money than they probably care to think about regularly.

14. No one cares where you went to school.

Went to an Ivy League school for nursing school. Now I have $90k of debt, literally no one cares where you went to school.

My peers who went to community college or state schools are doing the exact same job and buying houses.

Got in a fight while on an exchange program, ended up awaiting trial in jail for a year before being released. All loans and scholarships were cancelled.

Japan is a tough place, however the guards and the system was very nice and pleasant, one of the safest jails to be in the world. I suffer injustice but it was a while ago now and I try to get over it.

I answered honestly during a medical evaluation when I could have easily just checked no next to everything on the form and now I’m at risk of not being able to get the career I desire because of it.

Even if I somehow do manage to avoid being completely denied, it still will have cost me thousands of dollars in psychological testing.

11. It’s common, but still hard to recover from.

Flunking out of a university.

Still can’t get a job despite completing most of my degree and dropping out due to mental health issues. I have yet to figure out a good way to explain the lack of work experience on my CV.

Forgot to turn in FASFA on time and lost out on $5,000 worth of grants.. had to end up taking loans out.

Tough lesson but it taught me to pay attention to deadlines.

Bachelor’s in English Liberal Arts, Minor in History. I had no interest in going into teaching, and I couldn’t get any agents to represent my writing.

I found myself in an entry-level crappy job only because my dad was a VP there and he got me an interview. One good thing about that company was that they 100% reimbursed my tuition for my Master’s Degree in an IT field.

That one Master’s Degree that cost me 2 years of time and $0 is what finally started opening doors to decent jobs.

7. This makes me panicky.

I worked for UPS for a season. I failed to get a signature for a package (containing a firearm) at a home where I was aware the owner bought and sold guns…..

Package goes missing, crimes get committed, ATF gets involved. I wish I knew the (theoretical) price tag on that mistake other than never being able to work for that company again.

Law school. I didn’t want to go in the first place and should have dropped out in my first semester. I failed the bar twice – by less than 5 points each time (second time was even less but I can’t remember – I think it was just under 2 points). My state doesn’t allow appeals.

I am over $200k in debt and now stuck in a non profit job that has completely burned me out. I’ve been here over 5 years and gotten two promotions but the job is soul sucking. Started having panic attacks after going back to the office in July. My boss just quit – I am sensing from burnout and the culture of our organization – and I’m being moved under someone who is extremely disorganized.

My department went back to remote work and I did get scouted for an interview for a position that would have a significant pay increase but they don’t qualify for my loan forgiveness program so I can’t take the job. I’m around 4 years away from loan forgiveness but even that’s a shot in the dark. I am hoping that I’ll be able to get my shit together by the time they require us to go back into the office but at this point I haven’t even been on the train in two years and I’m scared of having another panic attack. I want to take a break from work for a while but we can’t afford it.

Second marriage. She spent a LOT of money without my knowledge, including my retirement account.

Left my laptop on the front counter of my work while going into another room. We are in a major homeless area. Came back 15 minutes later and mine and the receptionists laptops were stolen.

I now back up to the cloud all the time.

My most recent was going to the doctor.

Went for a PAP smear. Asked 4 questions relating to my birth control and the vagina since I was seeing a gyno that day.

Received a $413 bill because the 4 questions I asked were “deemed outside the scope for the appointment”. Over $100 per f**king question.

My wedding. I wanted to get married by Elvis in Las Vegas just the two of us but my fiancé had visions of wearing white tie and tails.

I was insecure and just went along with it and the entire evening was SO stressful and one of the worst nights of my life because I was so worried about what everyone thought and if they were having a good time.

It’s been 23 years and I can’t bring myself to even look at pictures. We’re happily married now but the wedding was just a colossal waste of money.

1. This gives me anxiety.

I mean, it’s hard to read about stuff like this without cringing in solidarity, right?

What’s a costly error you made? What did you learn from it? Let us know in the comments!