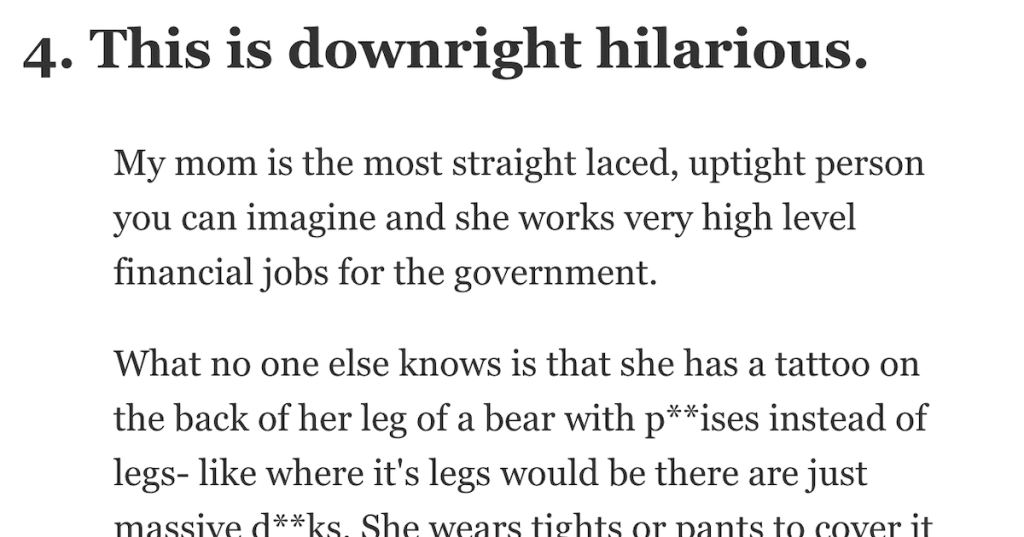 I hate secrets. They kind of eat away at you, like they have a life and mind of their own and just can’t wait to emerge into the big, scary world and do their damage.

Sometimes they come to you when you don’t ask for them and sometimes they’re the result of your own dubious decision-making, but either way, we feel like we have to keep them close for as long as we can.

These 14 people are admitting to sitting on some pretty juicy ones, so check them out.

Zero enjoyment on her face. It was multiple levels of odd.

A good friend of mine is Indian and gay, which she knows her family won’t accept. She about to have an arranged marriage to a man, who is also gay.

Neither of their families know the truth and are excited about the upcoming wedding. The groom’s boyfriend is part of the wedding party.

They plan to have children via ivf at some point.

I know his kink, he knows mine. It’s basically mutually assured destruction if either of us ever turns into that big an a$$hole.

My stepmom threw away a family heirloom that was gifted to me to make my already poor relationship with my dad worse.

I didn’t figure it out until many years later, but my dad has passed now and she was never popular with any of my family or any of his friends to begin with.

I had sex with my mormon boyfriend before and after he went on his mission, and also either directly before or even after he’d proposed to his now wife (he didn’t think it was particularly important to tell me that he’d found a good mormon fiancé in another town already).

This is a big no-no in the mormon church.

9. Some secrets shouldn’t be kept.

One of my brother’s military friends sexually assaulted me while my brother, his friend, and one of my friends were hanging out playing pool and drinking. My brother knows because I told him the night it happened. My family also knows.

The dude is married and has three kids. Initially my brother was furious and talked about shooting the guy, but now they’re friends again and the reasoning he gave me was “everybody cheats.” Except none of it was consensual and I’m not a piece of s*%t.

His wife showed up in my “People You May Know” on Facebook and I’ve contemplated telling her.

I plan on telling the wife, and yes, my brother cheated on his partner to be with his current wife. He’s also in the military and that’s how he knows the douche in question.

Not sure about life ruining, but basically someone spammed another person with what they thought were anonymous death threats + told them to kill themselves, then fled the platform they did it on and now are fairly successful on another.

Definitely weird knowing someone’s a shitty person + having evidence and several witnesses while their fans / friends dont and think they’re a sweetheart.

7. She better watch her back.

One of my coworkers smokes meth at work. In the last three months I’ve found probably half a dozen pipes she’s left behind because she’s too fucked up to remember to hide them. About a month ago she started leaving these passive aggressive notes (usually when the boss shows up) about how she’s the only one who does her job

I showed her the folder on my phone and told her if she leaves another bulls*%t note for me to read, I’ll call the boss, then I’ll call DHR.

More like a secret amongst me, my mom and siblings, but it’s how abusive my dad used to be. Still is but he has improved.

My brother barely even speaks to my dad anymore, he caught the majority of the abuse when we were teens.

Mum passed away 2 years ago and since then he has stopped majority of his abusive behavior. Whether of not it was intentional or not I haven’t figured out.

But every now and again I’ll just have flashbacks of all the violent and aggressive bulls%*t he pulled.

Wouldn’t really ruin his life but it would be embarrassing.

One of my buddies is a furry, like a massive furry.

I was looking for some old call of duty videos we made in like 2009, I was just searching the old Gamertags, trying to figure out where they were and a page for a furry website popped up.

It had all his basic info on it, with an up to date age, I looked around the page and found an IRL pic from his room that I recognized. It had like 8 years of almost daily uploads/interactions on there.

Not going to be the guy that just bullies him or tells our other friends, he’s not hurting anyone. But I’m also not gonna tell him I know, cause that would be mad awkward.

4. This is downright hilarious.

My mom is the most straight laced, uptight person you can imagine and she works very high level financial jobs for the government.

What no one else knows is that she has a tattoo on the back of her leg of a bear with p**ises instead of legs- like where it’s legs would be there are just massive d**ks. She wears tights or pants to cover it all the time, as far as I know I’m the only person that knows about it. She was a very wild teenager and met up with an “aspiring tattoo artist” (aka rando with a tattoo gun) in a hotel room to get a tattoo of a bear when she was 16- the guy got a little excessively creative and gave her a bear with dicks for legs.

It is so vulgar that if anyone saw it I think there’s a good chance she’s lose her job, or at least have some serious explaining to do. I once asked her why she doesn’t get it removed and she says it’s her “symbol to her stupid youth”.

The point is that she is now of legal age and her family treats her as the exemplary girl that she never gave problems with the minors of the family. She is in a 1-year relationship with a boy from church that they approve of and with whom she “had no relationships” because they are expecting marriage.

If they knew the things she did in her adolescence, they would completely disown her, she would take away all the financial stability that she has from her since she continues to live with her parents. And all her neighbors would stop talking to her because her father is the pastor of the church.

My friend who got married (to a girl) is gay.

I live in an Asian society where being Gay is still stigmatized.

He told her he was mostly gay and interested way more in men than women in their first year of marriage. Divorce is also very stigmatized. They have a secret open relationship where she is free to pursue whoever she wants and the same applies for him.

They are currently in their 60s. Both are like each others best friend and are very close.

From what I can tell, they are happy with each other. Just not romantically.

One of my closest friends went to an Ivy League college. He very much acts like it on a regular basis.

I know (but he doesn’t) that his parents bought his way in. His grades were far too mediocre.

What horrible secret do you wish you weren’t keeping? Confess in the comments!