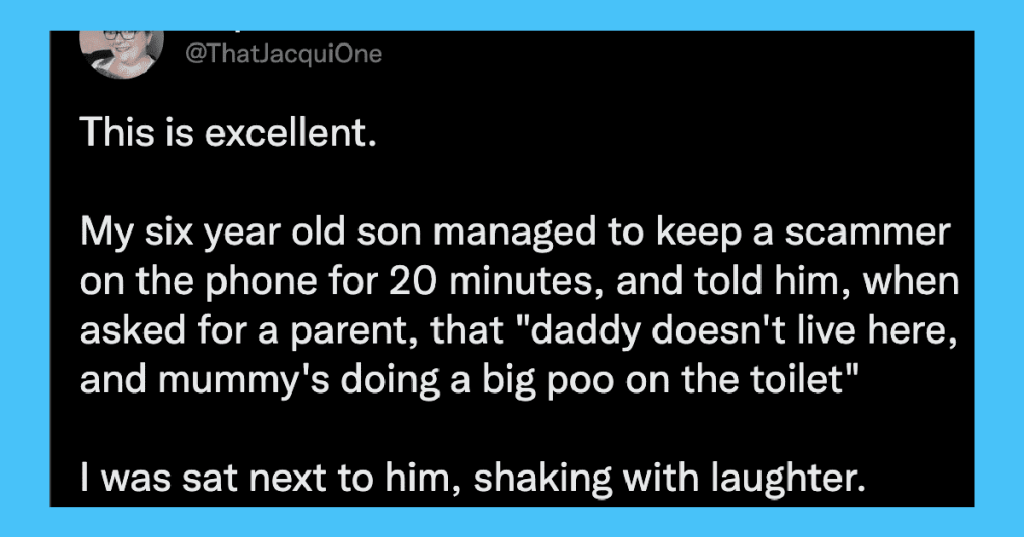 Cell phone technology is great, and one of my favorite features is how you can set your phone up to tell you when a call from an unknown number is likely a scam.

Now, I don’t personally answer calls from unknown numbers (or anyone but my mom) anyway, but still – it’s nice, right? Like you’re sort of vindicated in ignoring it.

These 13 people answer, though, because the jokes they’ve got for the people on the other end of the line make the annoyances worth it.

Unless they end up in the middle of one.

My fave is to be a “detective” investigating a murder at the premises, just picking up the phone and how the caller is a suspect as they must’ve known the occupant, and they must attend their nearest police station to help with enquiries….

You’d think they would be prepared for all replies.

Had a call where they wanted to talk to me about the accident which wasn’t my fault. I said “ It wasn’t an accident. I meant to kill him.” They hung up. That’s just rude.

11. You almost feel sorry for them.

But not for long, because this is hilarious.

I faked a panic attack because I "couldn't remember the car accident I'd been in and thought I must have amnesia".

Freaked him the hell out. He said (and this is funny) "Forget it, there's no accident, are you okay?" 😂

How else are you going to get the accent right?

I've started replying in Gaelic. It's a great way to practice! And they haven't a clue what language I'm speaking. Mind you, a native Gaelic speaker might not either, but I'm improving.

9. They have a protocol for that.

Or he’s going to “accidentally” disconnect the call.

Scam caller: I understand you've been in an accident
Me: was that the one I was killed in?
Scam caller: please hold the line, I have to get my supervisor as I'm not allowed to deal with death cases
🤷‍♂️🤷‍♂️

I've told them yes I was involved in a car crash called Brexit and could I sue the government?

7. Plenty of material there.

And no one making those calls is probably going to catch on.

I miss my youngest son being at home. He had all the answers usually offered in a very urbane voice. He once conducted an entire conversation with quotes from Romeo & Juliet.

6. Do you suppose they know?

Or are they just completely grossed out?

I shout for my "Dad", tell them he's very old and slow. If they're still there after 20 mins I say in an old-man's voice, "Deirdre! The catheters come out and the end's all cracked and bleeding again!" They tend to hang up. If not, I continue with a list of ever worse symptoms.

I would pay good money to see their expressions.

My six year old son managed to keep a scammer on the phone for 20 minutes, and told him, when asked for a parent, that "daddy doesn't live here, and mummy's doing a big poo on the toilet"

I was sat next to him, shaking with laughter. https://t.co/F6pnexfRrq

They don’t feel badly for you.

New tactic. Chat with them about my family and their family. Draw them into friendship. Then casually ask them if their mother is proud of their job. Yesterday I had one in tears. Mrs Kiosk says I was too cruel but I disagree. These people steal from the vulnerable.

My six year old son managed to keep a scammer on the phone for 20 minutes, and told him, when asked for a parent, that "daddy doesn't live here, and mummy's doing a big poo on the toilet"

I was sat next to him, shaking with laughter. https://t.co/F6pnexfRrq

The sad part is he probably doesn’t get why.

For the proper scam ones I sing ‘I’m and little teapot’ until they hang up. One guy who was trying to get access to my computer started shouting at me fir ‘wasting his time’.

And hate their lives all the more, probably.

Y’all, I am so not this creative when it comes to things like this.

Have you ever had a funny reply for scammers on the line? Tell us about it in the comments!