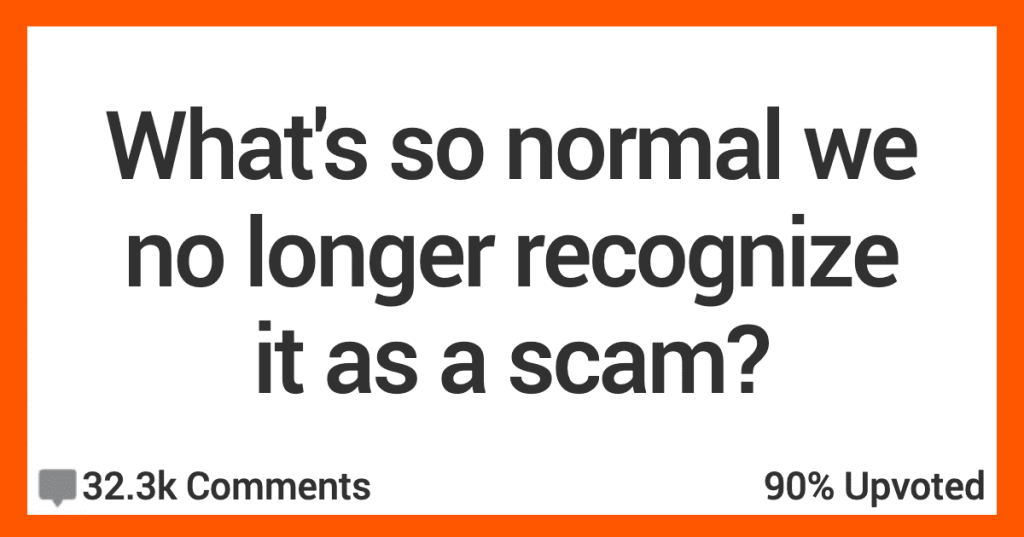 16 Scams That Are Often Just Accepted As Normal

The world today is one wild ride, y’all. We have to question everything we’re seeing and the things we’re told on the internet – because honestly, half of the time (at least) we’re swallowing scams like that’s just how it has to be.

These 16 things are total scams, but we all just acknowledge that they’re part of our daily lives, for better or worse.

There’s loads of them but apparently they’re rare so sell for major stacks.

Diamonds are fascinating. They’re kept artificially scarce by the people who own the diamond mines, and they’ve managed to somehow ensure that there’s no market for reselling them.

My dental is insurance is worthless. When I was younger I had my front tooth knocked out and the dentist was able to put it back in but it would only last for about 18 years.

Fast forward 18years the tooth split and got infected. From there I had to make a decision between a flipper or permanent tooth. The dentist told me if I did not get the permanent tooth my bones would retreat due to not having a tooth to form around which would result in more tooth loss.

So I went with the permanent tooth and insurance denied coverage claiming it was cosmetic. Preventing future tooth loss was deemed COSMETIC. $3k out of pocket.

Every time I see “we don’t pay but we offer college credit” I’m like, you realize that means the intern is paying hundreds of dollars to be there, right? The org doesn’t offer the credit, their college does. And the college makes them pay for those credits.

“We don’t pay but we offer college credit” is not only entirely misrepresenting the situation, but it’s literally a worse deal than just saying “we don’t pay.”

13. Health insurance in America is a scam, full stop.

Health insurance plans that charge 500-1000 a month just to be insured, then don’t start covering your bills until you’ve paid another 2000-10,000 out of pocket….and even THEN will still make you pay a 45 dollar copay.

And on the provider end, your plan is delaying payment on claims so your 500-1000 dollar a month premium is just going into the pocket of the executives and shareholders instead of health care providers.

And behavioral health claims get most of the abuse (just in case you were wondering why so many licensed psychotherapists opt out of accepting insurance).

Working 90 hr weeks and having no life outside of work is not healthy nor is it sustainable.

I just turned fifty and I have decided I’ve stopped trying to impress people with my work ethic. I’ll work hard, of course, but I sure am not going to put in anything beyond my eight hours if I can help it.

What am I going to do? Water my plants. Make my kids breakfast. Take my dogs for a walk. Try to make my wife laugh with corny jokes.

The fact that you cannot just buy software now. You buy a subscription and never actually own anything.

This. $126/year to access Microsoft office for the family now -.-

I used to buy one CD and we’d get 3 codes to put on our computers, good to go for years.

Costs money to fucking send my scores to a school 💀💀💀

Non profit my a$$

Weddings and every business tied to weddings.

7. It’s honestly barely worth it.

I’ll be the first one in my extended family to be cremated when I kick off just because of this.

I don’t need no expensive coffin for this body that’s gonna rot away anyhow.

Free trials that automatically roll over to paid subscriptions.

I worked at Spotify and we used to tell customers that it was mentioned in print on the free trial implying that they’re just not reading observantly. But the print is so small, it’s almost an afterthought. I felt disgusted when I was there. Imagine blaming the customers.

Edit: LPT – Cancel your free trial as soon as you get them. The free trial will still run its course and it’ll automatically revert to free once it runs out.

4. The people who can do something don’t want to.

Not a monetary scam, but putting the majority of the responsibility of stopping climate change/ fixing the environment onto the normal people. I’ve worked in the food industry, and I can tell you for a fact that it doesn’t mean d*%k if I sort my rubbish when every day a single, small-scale factory is throwing out literal tonnes of wasted product, not to mention the energy wasted in making that product.

Tons of s*%t falls on the floor, perfectly usable food (but not pretty enough to sell) just gets tossed like it’s nothing, and even in my usual sector, engineering, the amount of metal that’s wasted and the litres upon litres of grease and oil just f**king everywhere would stun you.

Why the f**k am I putting in the effort to save power and make less waste when these barely regulated companies are getting away with this? It’s so disheartening.

Instagram influencers using their kids as bait to advertise products.

You want some unpopular opinion?

Ryan’s world is a scam to get around advertising rules. You don’t need “paid promotion” links in there if it’s just a kid playing with toys right… Except they are his brand on which he makes Hella bank.

Not hating the kid, just the system that allows it.

The only f**king business in the world who will fight you claw and teeth to deny you the ‘product’ you have been paying for years go get.

1. That is not convenient.

It’s more convenient for you, too, bitch. Where’s MY convenience fee.

Let’s all start asking questions and saying no, what do you say?

What other normalized scams belong on this list? Let us know in the comments!