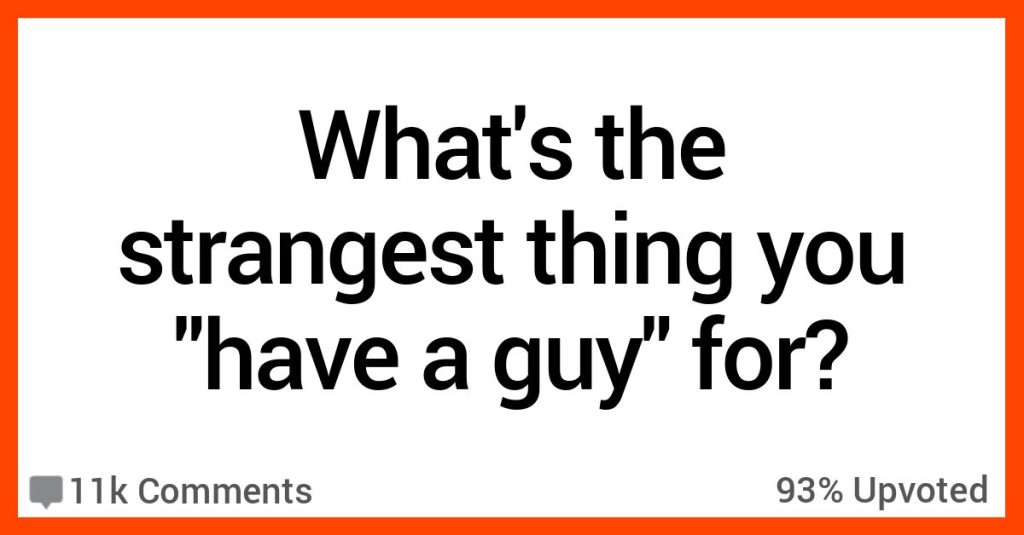 14 People Who “Have A Guy” For Some Strange Things

Do you “have a guy” for something or other in your life? I bet you do, even if you don’t realize it – a guy to deliver wood, or food, or maybe to come and check out your furnace and air conditioner a couple of times a year, right?

These 14 people have guys for things you’re not going to believe…but that you might want to copy after reading that they exist.

I have a mattress gal.

She runs a high end mattress shop and is supposed to “dispose” of any returned mattresses. I take care of “disposal” by showing up at the customer’s place bringing the “disposal” mattresses around to any friends or family in need of a mattress upgrade.

I got a sweet $4000 king bed for free and hauling it because it was a return.

They aren’t the best quality, but if I ever have a friend or family member that needs a spare computer monitor, I call him up and get one from him.

Thus, making me the “computer monitor guy” for several other people.

If you need a hive removed he is the guy to call to safely and humanely remove the bees without killing them.

His business cards say “Chicken Rescue” on them.

Pretty sure he’s also some type of mobster.

I have a “queen guy” who supplies me with new queens.

Even better, I keep bees in Brooklyn and my “queen guy” meets me in Queens at a Burger King.

He sells me a queen in a Chinese takeout container. Great price too.

9. I definitely need one of those.

I used to have a pie guy.

He would come around to my shop and all the shops and businesses in the area. Had savory Cajun pies and sweet pies.

He had a few regular choices on hand all times and also took custom orders. The étouffée pies where incredible.

I’ve got a clam guy.

He gets fresh clams in the morning then walks around town with a cooler on a cart and sells them door to door.

I got him business cards for Christmas one year and he mad me write “clam master” on them. He’s a character.

Edit to add some more info:

He does deliver door to door. He’ll sometimes sell the majority of his haul to a seafood restaurant near me, but he’ll usually hold back a few dozen for me.

First time I met him probably 7 or 8 years ago he was carrying clams in a 5 gallon bucket walking my block. He asked if I wanted to buy some clams and I said yes and we’ve been friends ever since. He later started coming around with a big cooler on a cart and even had a moped with a tiny trailer for a little while.

He doesn’t deliver on demand but he reliably comes by once or twice a week during clam season. Always fresh caught that morning.

I have a sloth guy.

Three separate family events over the last 15 years? I’ve called my guy and he’s brought a sloth to the party.

He runs a USDA-certified wild animal rescue and has has his sloth for close to 20 years. He takes extraordinary care of all of his animals. The sloth is not a performing animal- no one gets to approach, handle, or pet it. He simply brings it for a short period of time so that people can see it, and he discusses its life, behavior, and care.

I buy oysters by the bushel and my guy comes to me.

It’s actually a pretty cool gig he has.

The county wanted to improve the water quality in our local bay so they started a program where they’d give basically everything (but the boat) an oyster farmer would need to start raising oysters. He had a boat so he figured why not. It started out as a side project but, by the time it was time to harvest, he had so many oysters that he started selling wholesale to restaurants and fish markets.

Now he and his wife sell oysters to restaurants and fish markets full time and the county still pays for nearly all of their expenses.

I have a salsa lady, she’s been winning awards for it since before I was born.

Eta: Wow, I wasn’t expecting this to get so much attention. I’ll call her later today and ask if she’s open to shipping orders out for y’all.

Second edit: Sorry y’all, she says she sells out locally and doesn’t see the need to ship.

My Uncle has a criminal history, now owns a car Business, but still in contact with old friends. He once told me, if I need something, “he knows people I dont want to know”

I have a guy that will f**k your life up.

Feel free to ask for his number.

A friend who was a bit of good girl was doing a sociology project and hung out with a local drug lord for a bit as part of it. When illegal things were happening, he would tell her to leave for a while.

He ended up really taking a shine to her and at the end of the project he gave her his number and said if she ever needed anything to call him. A few months later she called him to just say hi, and he yelled at her not to call unless she needed something done to someone.

Being a good person with a connection to organized bad people just blows my mind.

I have an illegal cheese and jerky lady.

She owns a farm that sells legitimate animal products farm-to-table but she also makes cheese and jerky on the side and sells it only to people she trusts.

In Canada we have incredibly strict laws around dairy and jerky products.

I never would have imagined there were “guys” for such niche stuff, but I mean, it makes sense!

Do you have a guy for a niche but important and helpful task? Share what it is with us in the comments!