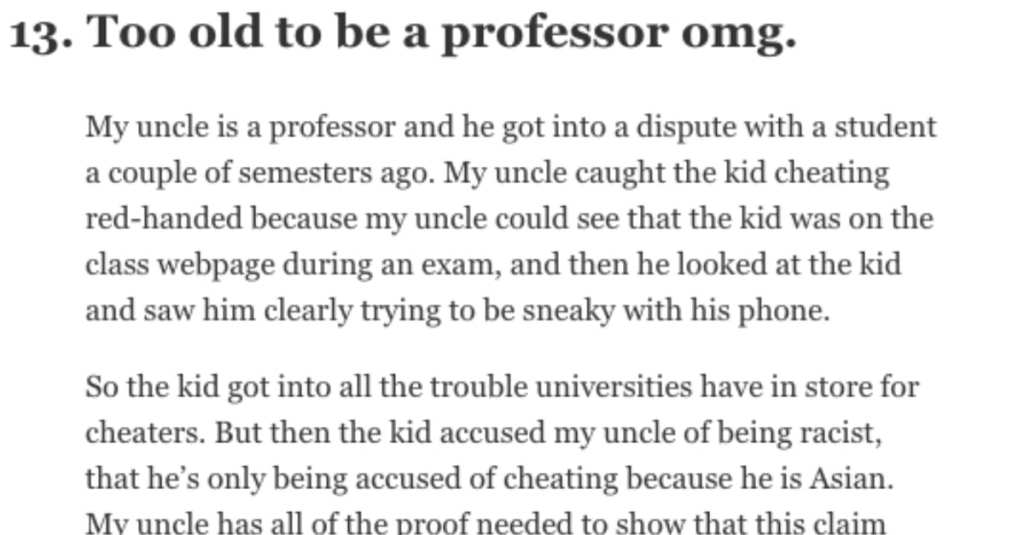 In some professions, reviews and ratings have always been a part of the job – like it or not, if you provide a service or a creative product, people will tell you what they think about what you’ve done.

There are other professions that haven’t been subjected to that sort of regular feedback until the internet became a thing, and honestly, we’re all trying to decide how we feel about it – including these 14 professors who found ratings and reviews of their work on Rate My Professor.

14. All of those can’t be a coincidence.

Just a student, but I had a professor that I looked up after getting 3 weeks into the course because of how bad it was to follow every single rule. This was an English 101 class over the summer online. The professor had a couple hundred reviews with an average rating of 1.4.

Two separate 10-plus page documents of rules with a third that was 11 pages of banned words and phrases, due dates that would be changed without an email or notification of any kind, and so many grammar errors that it was impossible to process. She would change due dates by editing the syllabus online, but not tell anybody. So anyone that was like me, and used the original syllabus for the first couple weeks was going to be given a zero on our first big assignment because she moved the due date from a Friday to the Monday earlier in the week. After getting multiple complaints, she gave everyone their fair grade.

Now the funniest review was “this class was like 1984 for being controlled by fear from the thought police, but I couldn’t even write that in a paper because it was banned.”

My uncle is a professor and he got into a dispute with a student a couple of semesters ago. My uncle caught the kid cheating red-handed because my uncle could see that the kid was on the class webpage during an exam, and then he looked at the kid and saw him clearly trying to be sneaky with his phone.

So the kid got into all the trouble universities have in store for cheaters. But then the kid accused my uncle of being racist, that he’s only being accused of cheating because he is Asian. My uncle has all of the proof needed to show that this claim was bullshit, and the kid got punished appropriately.

A few weeks later my uncle checked RMP and there were several reviews (all with similar-sounding language) accusing him of being a racist. He contacted RMP and explained the situation and they all got taken down.

Then a few weeks later a bunch of (again, similarly-worded) reviews came up saying that my uncle is too old to be a professor (I think he was 47 when this all happened). He had those taken down too, but he tells his students that story before every exam and now students will post “definitely not too old to be a professor :-)” and stuff like that on his RMP page, because he’s actually a good professor and people really like him.

I only teach online and never meet my students, but somehow got a chili pepper. I also had a student complain that I liked my subject too much.

I had more fun reading my mother’s reviews.

I suspected she was a good teacher, but seeing all the glowing comments made me so happy.

11. Someone is a perfectionist…

My very first comment was: in all caps, “Don’t take her!! All she ever does is talk about witches and fairytales and then throws the assignment at you expecting you to know everything.”

For starters, it was one day. It was a genre-themed writing class and we did one day on the fairy tale genre discussing structure, themes, etc. They read the “The Snow Queen” and then they could do an optional extra credit assignment about Frozen.

This was posted on the day we discussed fairy tales and I also returned a major essay that day. A student threw a huge hissy fit in class over a B+ instead of an A. I pulled her aside and went through her paper with her explaining deductions. She apparently was still mad.

That was my only comment and rating for awhile.

“This teacher is so cool that I can’t believe she is as old as she is.”

I looked up my partner on RateMyProfessor. Someone wrote that he is so attractive it’s hard to pay attention.

From my father’s RMP:

HE DOES NOT CARE ABOUT YOUR PERSONAL PROBLEMS AND WILL FA YOU EVEN WHEN DIAGNOSED WITH CANCER!

My dad has no clue who this is, considering no one has ever told him that they had cancer and couldn’t make it to class.

There have been some fun ones, however this one from back in early 2000s always stuck out to me:

I hope you get the bird flu and die.

However, before you die, you understand that you gave it to your wife and family and they all die.

And then you die with the knowledge that you killed them.

Not a prof, but I had a teacher who mentioned her sisters favourite past time during her family’s Christmas get-together was reading our teachers RateMyTeachers reviews out loud.

Not a good idea telling a class full of high school students, lol.

One of my fav uncles is a professor at a local state college that’s pretty fancy.

So my aunt and I looked it up.

Pm everyone loves his class, clear expectations, clear explaining, but one person said they were worried about his teeth cause of how much Diet Coke he drinks in class.

My dad was a prof, and he was upset to read one review on RateMyProfessor that said, “He might look like Santa, but he sure ain’t jolly!”

He was annoyed that they thought he looked old.

The funniest review was from an organ performance major.

He said that I was “the only instructor who could effectively teach organ technique and the performance of literature in the studio while simultaneously correcting a wrong note he heard coming from a piano major across the hall in a practice room!”

2. This would be a hilarious movie scene.

I was the undergrad liaison to my major’s departmental meetings. They all do. It was hilarious to watch the ones with negative reviews rail against it while pretending that they hadn’t looked themselves up on it; meanwhile the ones with positive ratings half heartedly agreeing with them that it’s bad.

In grad school we did a parody video: professors readings mean ratemyprof reviews about themselves.

We also look at each others. Professors who are lovely in normal life can be total a-holes in the classroom.

One professor I know got fired for trading sex for grades and got another job (currently at Manhattanville College). I found out he would submit his own “Rate My Professor” evals because he submits ones that say he is handsome but uses outdated language.

For example both his most recent evaluations said he was “Easy on the eyes” which as far as I know is not a common phrase with 19 year olds.

If you’re a professor and have one to add, please do so in the comments!