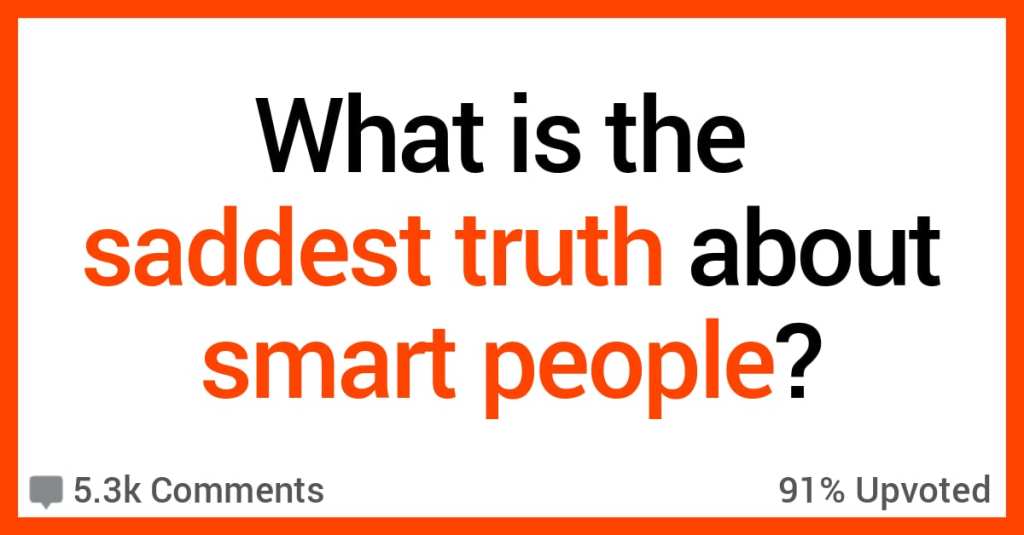 14 Sad Truths That Go Hand-In-Hand WIth Being Smart

People who are smart enjoy being smart, for the most part. They think it gives them a leg up, or the ability to better problem solve, or support themselves, or what have you, but it’s a well-known truth that intelligence also correlates with higher instances of depression, anxiety, and general unhappiness.

People who are less intelligent might have certain struggles in life, but they do seem to be a bit happier in general.

Here are 14 more sad truths about being intelligent, according to Redditors who think they know.

A lot of them will never get any recognition.

13. The fear of wasted potential.

Intelligence is often paralyzing, and if intelligence is paired with a pessimistic mindset you’ll probably never live up to your potential.

Truly smart people can thrive if they have social skills. if they don’t, you would never know they are smart.

I think having excellent social skills and the ability to connect with others, empathize with others, and perform emotional labor is a type of intelligence that doesn’t get enough credit. It’s hard work!

I think the book of ecclesiastes puts it best: For with much wisdom comes much sorrow, and as knowledge grows, grief increases.

Or, as u/Shiranda sais it in this post: “One of the first signs of the beginning of understanding is the wish to die.” Quote from Franz Kafka

The more someone ‘gets’ this world we live in, the more depressing this life becomes. For loads of people don’t care about love, sharing or caring; Money rules all.

There’s a book called Iconoclast which has the same premise. Written by a neuroscientist, it delves deep into how two people with similar genius can achieve completely opposite results during their lifetime – for example Picasso Vs Van Gogh (who died pretty unrecognized) or the guy who came up with the idea for FM (he ended up committing suicide). He had the far superior tech than AM but lacked the social aptness to get his ideas accepted.

9. There are so many problems.

Normally they are not able to solve them because of outside factors.

Smart people live in a world where everything is broken and no one will allow them to fix it.

one thing i know i need to control is letting confidence slip into straight ego. Its okay to be confident but in the “i deserve to be here with you my peers” kind of way. Once it slips into an “im better, smarter, stronger etc than these people” it becomes negative.

Confidence is attractive, whether for both platonic and non-platonic relationships. It makes people recognize you are their equal and engage with you more, allows you to hold your own in conversation etc. But when it becomes too great it turns people away, people see you think you are better than them and turn away.

Being smart is a practice. You can have potential for intellectual aptitude but your mind must be exercised.

Too many “smart” people from high school/childhood get out into the real world, are met with challenge for the first time, sink into their comfort zone, and then never do a smart thing again.

I’ve had severe social anxiety for most of my life, and when I was younger I had this reputation for being really smart. I didn’t try to encourage it, but everyone in school thought I was the most intelligent girl around, when I really just wanted to be treated like a person.

I remember my senior year when we got ACT scores back, I left class to go to the bathroom and when I came back everyone including the teacher was talking about me. A girl that I had been friends with walked up to me and said “hey coolestbi*chonearth, I heard about your 35… I hate you.” And then walked away.

I’d give anything to be able to interact like regular people.

5. It’s tough when you realize you’re not that smart.

In high school, I was considered one of the “smart ones”. Yet in college, I feel like the dumbest person in the room. I’m almost done with college, and I still have terrible study habits, and procrastinate on all assignments, because I’m still not used to dealing with the challenge, and actually having to work to understand something.

I barely studied in high school, did assignments right before class, and I still managed a 3.5 gpa. I wasn’t doing the easiest classes either, it was a mix of standard, honors, and ap. Definitely feeling the effects of my bad high school habits right now.

I wish schools focused more on preparing you for college instead of making sure you pass some dumb state test. I feel like I was just told to memorize things, but never taught how to learn, which sounds kind of weird, but actually knowing how to learn is an incredibly difficult thing to do.

Living in the shadow of your failed potential and being completely aware of it.

You see a lot of people these days talk about how formerly “gifted” students tend to struggle as they get older, and it’s largely because of this.

You can somehow just be smart in grade school and have everything come easily to you, but the flip side is that it robs you of the experience of actually learning how to learn things. I went through this in my senior year of high school and my freshman year of college.

I was a lifetime 4.0 student and very nearly failed a class my first semester of college because I could no longer just listen in class and then go ace every test. I had to actually like take notes and study them and shit. Wild stuff.

2. The first kind is bad enough.

Having high intelligence make you think a lot and very fast. Which is often good but if you get anxiety, now you have turbo-anxiety.

1. There’s more to life than being smart.

Just because you’re smart enough to see what’s wrong with the world doesn’t mean you’re capable enough to change it.

Just because you’re smart enough to see what’s wrong with yourself doesn’t mean you’re capable enough to change it.

You might form your identity around and measure your self-worth by your talent, your achievements, and the praise you get from others… and that’s no way to live life.

Many smart people, including some friends I know who perhaps could have been much more talented than myself, are flawed in other ways that prevent them from really making anything of their potential. It’s really sad. What’s even more sad is that society likes to gang up on them instead of helping them, because it’s really satisfying to some to hear about the flaws that bring talented people down to earth.

Society will pave a golden path for above average people, but turn their backs on the ones who are exceptional, usually because those people rock the boat too much, see things the world doesn’t want to see, or are generally really awkward and weird as a result of never quite fitting in. If you’re one of those kids, you have to end up in the right place, or you will be left behind.

I’m not saying I’m super smart, but I do agree with most of these assessments.

What are your thoughts? Share them with us in the comments!