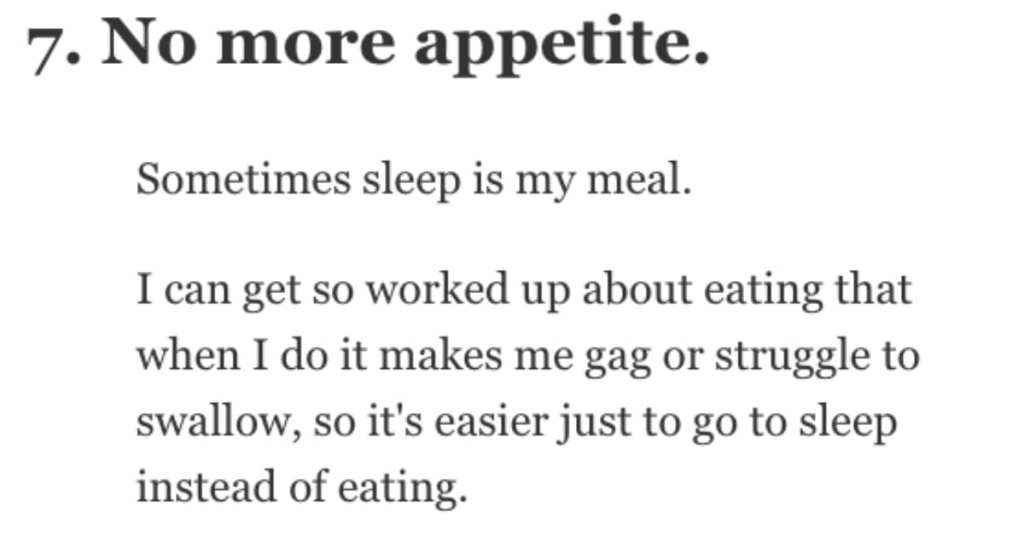 Our society is getting better and better about losing the stigma that’s long been attached to talking about mental illness.

We have a long way to go, but in the meantime, talking about our experiences with depression, anxiety, and other mental health disorders can make it seem more normal – and less like a reason to be embarrassed.

If you’re not sure what depression might look like in your loved ones, here are some symptoms that aren’t lack of energy, sadness, and suicidal thoughts, so keep a sharp eye.

Rumination. This is a big one for me.

It’s where you replay all of the painful and embarrassing things you’ve ever done in your life over and over again.

It’s a terribly difficult thing to stop doing because you don’t actually realize you’re doing it most of the time. You just think you are having the same normal thoughts everyone else is having.

I finally developed my own technique for stopping it, and it’s worked pretty well for a couple of years now.

Memory loss. I honestly can’t remember half of my life.

Not everyone has this and that’s ok. We all struggle with our mental illnesses in different ways. As long as we seek help, get better, and educate others, that all that matters.

I still relive memories from 20+ years ago that I just can’t get out of my head.

18. We’re all struggling in different ways.

I have huge gaps in my recollection, and a lot of other parts of my memory are muddled together.

My memory loss is pretty closely tied to depressive episodes. So for example, everything from 2008-10 and 2014-16 are a jumbled mess with whole events completely missing, as well as bits from my childhood. I do find it hard to create new memories, but I’m not unable to. They just aren’t as vivid as the ones from 2007 for example.

Agreed that both stress and age can impact memory, which can make it difficult to determine whether one factor is contributing more to the issue than another. I can’t speculate on what’s normal, but I think the reason I am not completely convinced it’s stress or age related for me is that the most significant gaps in my memory are closely aligned with depressive episodes.

I do also think that depression can impact short-term memory. I saw a lot of comments about being unable to learn new things, and while I don’t think that’s necessarily my issue, I absolutely have problems remembering things I just learned in the days and weeks that follow. I have made it a habit to write down everything, no matter how insignificant it seems. And if it’s work related, I write it down on paper and then I write it again in a searchable format (I use OneNote). It makes me move like molasses at work but that’s the only way I can ensure that I don’t screw up something important.

I read every one of your comments and while it makes me sad that we’re all struggling, I hope some of you walked away feeling comforted that you’re not just dumb or absent-minded as you might have been led to believe. I hope you’ll at least explore the possibility that there are other factors at play with a therapist.

Wanting to be happy and have a great life. But being comfortable in your misery and not having the energy or willingness or care to change it.

Edit: Can’t believe my highest voted comment is about how my head works.

It’s at 7. something thousands upvotes and a load of comments. If anything, it’s good to not feel alone.

I hope each and everyone one of you can get something from the comments. Even if it is just that… you’re not alone.

I had unbelievable brain fog and memory loss.

Brain fog should be talked about too, I felt like I lost about 20 IQ points.

You can’t fall if you never leave rock bottom.

14. The pendulum swing is the worst.

It’s similarly affected my work. When I’m on a manic upswing it’s like I don’t even have to try to think, I’m unbelievably efficient and flawless at work (and basically any other part of my life, everything is so easy to do).

Then depression hits and I can’t produce half as much, everything is riddled with errors. I try to adjust by double and triple checking everything and taking my time to avoid mistakes, but they miraculously appear everywhere anyways – and my boss wonders wtf happened and the overtones of “I really don’t want to have to fire you… But you can’t keep doing this.”

Like the “why aren’t you trying to get better” because what does better feel like??it sounds scary and unknown. Depression is familiar, and numb. I can believe I don’t matter, never leave my bed, and I will never disappoint anyone because no one will expect anything of me.

Learning to be ok with being ok is fucking hard.

And then I get suspicious anytime things are good. Like. I’m going to mess it up. I know it. I might as well give up now.

When I am in a major depression I must write everything down.

For me it’s not just the ‘fear’ of feeling better–it’s the fear of letting go the constant self-hate and anxiety because my brain goes, “and what have I done to deserve this feeling of comfort and satisfaction?”

I was a ‘whoopsie’ kid. My parents messed up in birth control, and so I arrived and they were forced to be together (my mom never intended to stay with my dad, who she was using as a ‘rebound boyfriend’). I was also the dumbest kid in the family, so I’ve grown up being screamed at for a) being the reason why my parents had to get together, b) also for embarrassing my parents repeatedly with bad grades…up until I forced myself to do better at school but became an unsocialized and awkward teen who’d say/do the wrong thing and embarrass my parents further.

Literally from the ages 4-21 I never went through a single day without getting shouted at. If it wasn’t about my dismal report cards, it was about me forgetting to make my bed (or forgetting to wash the dishes, or for not doing enough to keep my younger siblings out of trouble. I used to even tense up whenever my parents fought–which was often–because afterwards my mother loved to come after me to scream that it was all my fault). So I literally lived my whole life (still do) completely convinced that if I don’t watch EVERYTHING I do and constantly check for things that haven’t been done/slipped out of my mind–then something bad’s gonna happen and it’d be my fault for letting it happen.

Especially if you live on your own, not caring about cleanliness is a clear sign that you just don’t care how you even feel about things anymore.

9. So many reasons to lie awake.

Inability to make a simple decision.

Some nights I struggle for hours trying to figure out what to eat for dinner.

the 12-18 hours of sleep … and you still wake up feeling like crap.

Sometimes sleep is my meal.

I can get so worked up about eating that when I do it makes me gag or struggle to swallow, so it’s easier just to go to sleep instead of eating.

These days I’ve turned to soup as the solution, takes no time to make, creates very few dishes to wash (pan,bowl,spoon) and it makes sure that physical malaise doesn’t add to the mental.

When you’re depressed you don’t look after yourself so some of that rundown feeling is physical.

6. It makes everyone else unhappy, too.

Before I was diagnosed with depression, any small significant thing set me off but since it would mainly happen while I was working I had to bite my tongue.

I would be in a rotten mood all the time!

So, if someone starts to be really angry all the time or really only complains about situations they absolutely can’t change (here’s looking at you retail) and you notice they haven’t genuinely be happy in a long time, it could be depression.

Extra fun if you have depression AND digestive issues. Hard to motivate yourself into spending your non-existent reserves of emotional energy deciding what to eat when you know that, no matter what it is, it’ll probably make you sick anyway

This is why I’ve found customer service jobs so emotionally taxing.

You get pissed off some time during your shift but still have to be sickeningly pleasant, which means that those feelings sometimes get vented to the people around you once you’re clocked out which makes it difficult to maintain good relationships

3. Lack of interest and drive.

Not being interested in things you used to enjoy.

Random bursts of motivation and happiness for maybe a day or so before going right back to apathy.

Yes, constant anger for years and a very short fuse.

My poor husband and my poor poor kids did not deserve my lashings.

Thing is, it was only when it turned into deep deep sadness and uncontrollable crying that I finally realized it was depression was all those years.

SSRIs took care of it for a while, it was such a miracle.

Now I think I need an increase in medication, but can’t get it because I’m pregnant.

Still not as bad as before meds though.

1. Creativity is an energy suck.

As a creative professional this one sucks so hard.

It kills. I can do most things while depressed, I’m probably high functioning for the most part. Every day last semester I went to class, work, smiled, joked, did my job well, etc, and went home wanting to die. But when it came to my creative endeavors: my classes, my design job, and personal projects, I felt so down on myself that I thought I had nothing to give. Nothing kills art like low self esteem.

I mean, the low self esteem did lead to some really interesting poetry and dark experimental art, which is great, but nothing I’d put into a portfolio.

And so I failed almost all those classes, just totally ate the pavement.

And because I kept feeling little bursts of “oh wait, I can do this! I just need to ge…. …” I kept my hopes up until that had burned out, too.

The first step to being accepting is being aware, so take care of each other out there.

If there’s something else you would add to the list, please drop it in the comments!