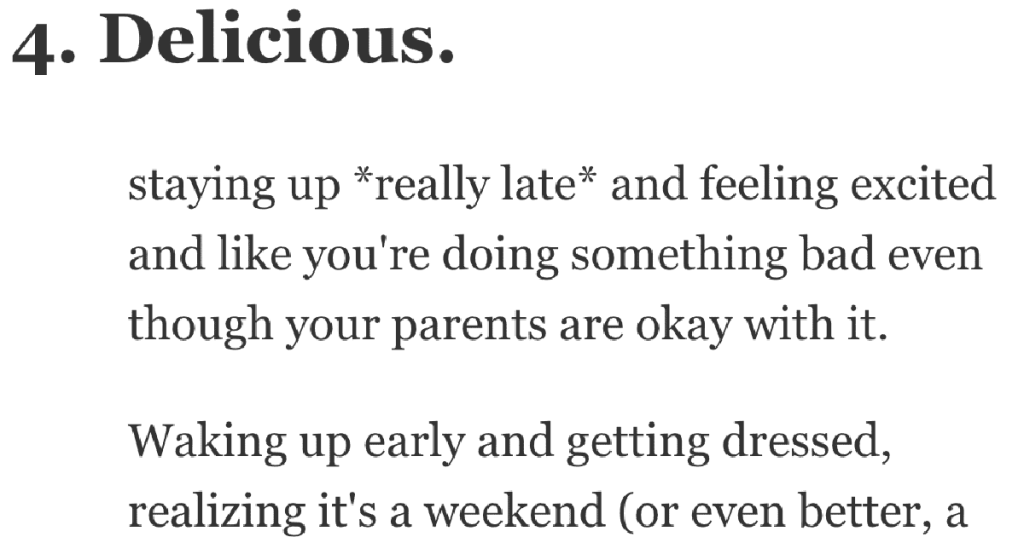 15 Childhood Memories That Most People Have

Life is a different experience for almost everyone. Our environments, our families, the circumstances that are out of our control – they all add up to unique experiences, at least as a whole.

That said, there are also some universal experiences that are just part of being human, and we all grow up having at least a few things in common.

These 15 people think they’ve come up with some childhood memories almost everyone should have tucked away somewhere.

Either trying to step on no cracks or on only cracks on the sidewalk.

Not being allowed to turn the light on in the car.

DON’T DO THAT IT’S ILLEGAL.

13. I wish they still sold these at baseball games.

12. For anyone who needs a rainbow.

You know what I love about this thread? The reminder of our shared human experience. So easy to get caught up in all the divisions that are created to keep us from achieving more together as a unified world, but then we read stories like this, and resonate with so many different funny memories, and really, we have all at one point been a bunch of young tikes who was curious about the world before spite or bitterness set in, pain or heartbreak, and we just existed, living with curiosity and wonderment, having funny experiences and endless adventures, and then, one day, we are forced into an awareness that removes that lens, and we forget. Caught up in endless chaos, hatred, violence, cycles of abuse, trauma.

My anecdote is the first time I discovered rainbows existing when you angled the hose spray up into the sky. And then trying to find the chest of gold at the end.

Been a while since I’ve seen a rainbow.

This thread was a good read, thanks OP.

That dreaded feeling of forgetting your homework.

I once dreamed doing my homework, and genuinely thought I’d done it. It was such a vivid dream, I could remember what I’d “written” about.

I remember the shock of opening up my workbook, only to see a blank page where the assignment was supposed to be. Moments before I had to hand it in.

Later I was annoyed that I’d wasted such a vivid dream on doing my homework instead of flying to another planet or something! 😀

When your sleeping in the car and your dad makes that one turn, when you arrive home, that wakes you up.

When I’m going through a stressful time, I tend to have a dream where I show up for school and don’t know what classroom I’m supposed to be in, I don’t have any of my books, i don’t know where my locker is, I don’t have my homework, and I’m not even sure what grade I’m in. I always get caught in the hall by the same bitchy English teacher and that’s when I realize I forgot to put on pants.

Those are bad dreams.

I feel like Thunderstorms were a bigger and more Frequent event when I was a kid.

They seemed to last all day.

7. Magic, but maybe not the good kind.

How the school seemed a different world when you stayed late, or had to be there on a weekend.

I could definitely run faster if I was in the hallways after school.

6. Those plastic one were worthless.

Accidentally snapping a ruler in half while testing “how bendy it is”.

Did it right in front of the teacher. Boy was I embarrassed.

5. Like seeing a dog walking on its hind legs.

Or when you saw a teacher outside of school (grocery store, for example) it was always shocking, like a gorilla had escaped the zoo and was doing people things.

You were just shocked this person could actually exist outside of the school building.

staying up *really late* and feeling excited and like you’re doing something bad even though your parents are okay with it.

Waking up early and getting dressed, realizing it’s a weekend (or even better, a snow day)

Riding in the car on a rainy day

Our mom’s leaving us at checkout to look for something then the cashier starts to scan the items.

And the insane amount of anxiety that comes with it.

Hauling ass up stairs after turning the lights off so whatever the darkness has behind you doesn’t eat you alive.

“Why is the moon following the car?” And also imagining a weird human figure running along the skyline and/or sidewalk keeping pace with the car (that one might be more specific but I used to do it and I saw someone else post about it so it’s gotta be more common than I think.)

This is a thread full of nostalgia, don’t you think?

What else would you add to this list? If you can come up with something that’s missing, drop it down in the comments!