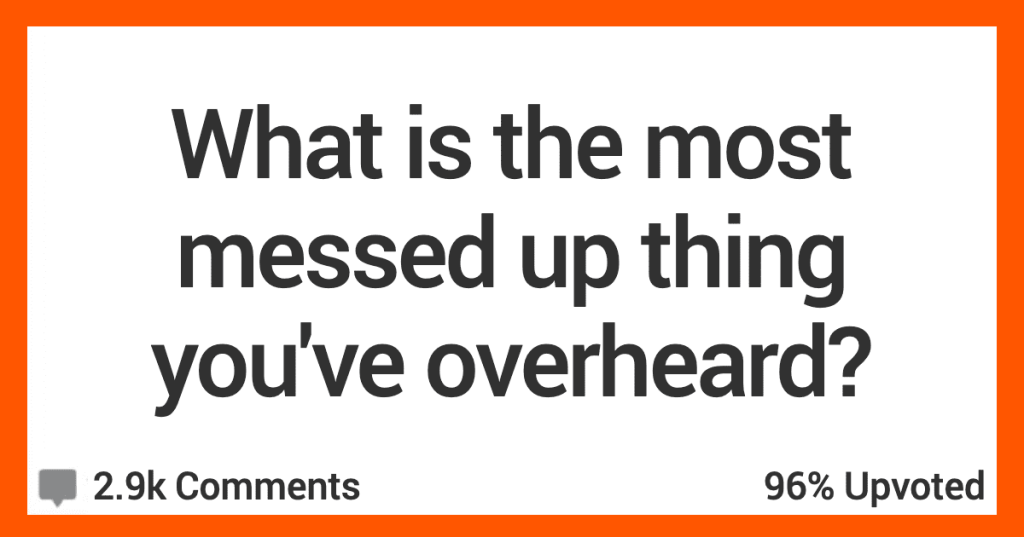 15 People Who Overheard Things They Wish They Hadn’t

Eavesdropping might be a terrible habit, but we’ve all done it on occasion. Maybe it’s not even on purpose – you’re doing something like shopping or getting your nails done, minding your business, and someone else is talking just a bit too loud.

These people might not have done it one purpose, but that doesn’t mean they don’t have regrets – because I’ve gotta think that for the most part they would be better off never having overheard these 15 things.

I was sharing a taxi with a total stranger then I heard the driver talking on the phone softly telling the person that he has the passports and the hashish and that he has two young women in the back seat.

The other passenger and I yelled at him and caused a scene in order to scare him and get out of the car. It was a nightmare.

14. That…is a lot of information in one sentence.

One time in science class I heard a kid (15btw) say that he sells pics of himself dressed as a woman to a 60 year old man.

I once heard two chicks fighting over whether The curious case of Benjamin Button was based on a true story or not.

It got really heated.

Man and wife have older relatives(grandpa and grandma) grandpa dies and they move grandma into their house and proceeded to make their own will to which she leaves everything to them instead of dividing it between the family she had it originally planned.

Granny was losing her faculties and was pretty happy to go along with it since she had family to live with in her golden years.

Also they hid this new will that they can bring out when she finally dies.

Is the blue part on a map the sky or the water?

Years ago I was in a local adult store browsing the goods when this man walked in. I overheard this booming voice asking the cashier if his package had came in yet. This guy was like 6’2″, jacked as shit, big ole white beard like Santa Claus, sleeveless camo print Alabama football shirt, with roughed up jeans and work boots. The cashier asked what his package was to which he replied “IT WAS A 14 INCH STAINLESS STEEL BUTT PLUG WITH A JEWEL ON THE END OF IT, MAM.” and oh boy, the mental images. Just said to myself “you do you, my guy!”

Later I went on to work part time at a Spencers and was talking to my manager about that experience one night and as he used to be the manager of that particular store, he actually knew the guy I was talking about! He said “Oh, that’s Greg! He’s super fucking nice. Wife is deathly ill and has a pretty rough silicone allergy, so he special orders anything she wants from that place. Nice couple, really!”

I heard two kids talking on the subway in Stockholm, they were around 8-9. Thé boy was trying to explain sex to the girl, and she wasn’t having it. She had so many questions and concerns.

I had to later collect my jaw from under my seat.

I found out my 15 old brother stuck his d**k in my nutella.

I worked the front desk at a residence hall at my university. She was a freshman.

A wheel chair-bound girl greeted her parents in the lobby by my desk. They held normal conversation for a few minutes. Eventually, the girl said to her mom, “I’m doing so well. You’re totally wrong. I’m NOT completely worthless.” Broke my heart and I remember it years later.

6. Why would they say that?

It’s not as bad as the other comments on here, but when I was younger (around 12 or so) I overheard my family casually talking about how i’m never going to get married and how nobody will ever want to date or marry me.

The fact that it was a casual conversation that they thought I was not there for is what really made it horrible.

a conversation at a lunch table at work:

p 1: “humans were never made to eat animals. even animals don’t eat other animals. it’s unnatural”

p 1, with the condescending face and tone of explaining something very obvious to someone very stupid: “what, birds aren’t animals!”

this woman was in her 30:s. i wonder where she thought chicken came from all those years 😆

Heard outside a bar.

A mother in a diner coaching her kids to accuse their father of abuse when they get to his house during a visit.

2. Some parents are just awful.

Happened when I was about 16-17 years old. For context, I’m the eldest of three. My parent was on the phone to someone in their bedroom, explaining how many children they had. I was in the hall about to knock on the door to ask something.

Well, a lot of fucked up shit happened but to straight up ignore my existence when describing how many children they had kind of sucked.

My dad years ago I was like 4. He had several back/spinal problems caused by hockey, & his parents being big believers in corporal punishment. It was that era where beating the shit out of your kids was acceptable.

He eventually had to have multiple operations. He lived in the hospital for 8 months. He was kept in an area with people with similar injuries & stroke victims. My mom took me to visit him after school. There was a new patient in there, a woman across the room. She had the head halo, full body cast, the works. I asked what happened to her. My parents are open/honest, not in a mean or malicious way just that they wanted me to know these things exist & life is far from fair or perfect. My dad told me she was the saddest one could ever be & she tired to fix it in her own way. She tried to commit suicide by leaping off her apartment building. The fall was not high enough to get herself out of whatever personal hell she was dealing with.

I’ll never judge someone in that position. I have depression & suicide has been a constant thought in my head for 20 years. It does really salt my apples when people call these souls weak. I find nothing weak about it. I can’t fault someone when they are so desperate, they don’t care about what’s on the other end, if there is one.

A few hours later she woke up. Nothing prepared me the guttural screams & sobbing when she realized where she was & still alive only now she was paralyzed from the neck down. It was like a wounded animal. The only words I could understand were “WHY!” My mom removed me very quickly out of the room to get a snack. To this day I still can’t shake those screams.

What’s something you’ve overheard that you wish you could unhear? Tell us about it in the comments so we can all suffer together!