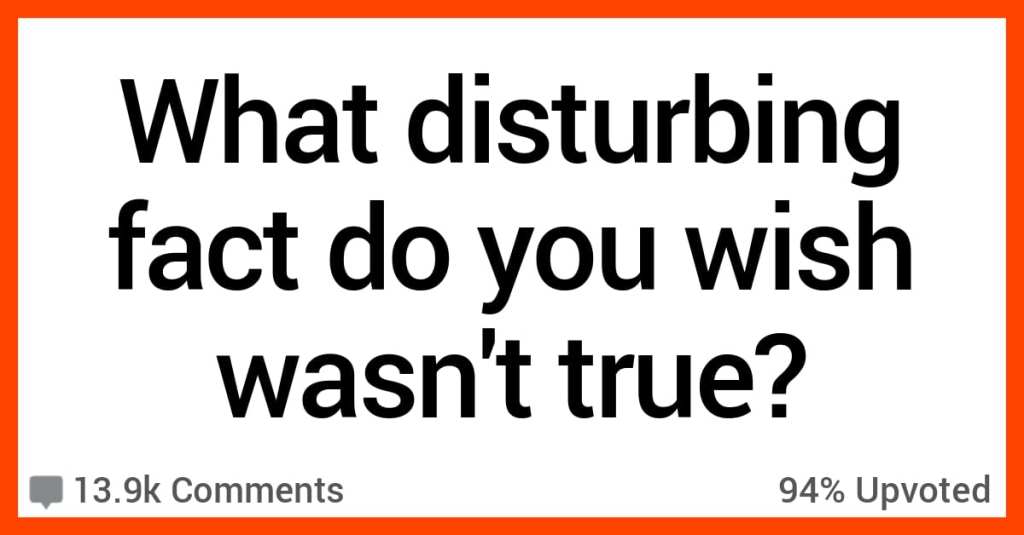 No matter how much you love facts, there’s a good chance that you’re going to stumble across a few of them in your lifetime that you wish you hadn’t read.

Knowledge is power and all of that, but I mean…some things we just don’t want or need to know.

That said, you can’t “un”know things, so what do you do with the most disturbing facts you know?

You wait until the perfect question shows up on Reddit and then hit other people with them, of course!

The chances of any of the super powerful people that used Jeffrey Epstein’s Island as a place to f*ck underage girls actually being punished for what they did is almost zero.

Clearly, these people are never going to face any kind of legal punishment, so I’d really appreciate if some kind of superhero assassin would just do us all a favor and take care of it.

Obviously, that’ll never happen, but a girl can dream.

Within three days of death, the enzymes from your digestive system begin to digest your body.

Khaled El-Masri is a German and Lebanese citizen who was mistakenly abducted by the Macedonian police in 2003, and handed over to the U.S. Central Intelligence Agency (CIA). While in CIA custody, he was flown to Afghanistan, where he was held at a black site and routinely interrogated, beaten, strip-searched, sodomized, and subjected to other cruel forms of inhumane and degrading treatment and torture.

After El-Masri held hunger strikes, and was detained for four months in the “Salt Pit”, the CIA finally admitted his arrest and torture were a mistake and released him. He is believed to be among an estimated 3,000 detainees whom the CIA abducted from 2001–2005.

In May 2004, the U.S. Ambassador to Germany, Daniel R. Coats, convinced the German interior minister, Otto Schily, not to press charges or to reveal the program.

El-Masri filed suit against the CIA for his arrest, extraordinary rendition and torture. In 2006, his suit El Masri v. Tenet, in which he was represented by the American Civil Liberties Union (ACLU), was dismissed by the United States District Court for the Eastern District of Virginia, based on the U.S. government’s claiming the state secrets privilege. The ACLU said the Bush administration attempted to shield its abuses by invoking this privilege. The case was also dismissed by the Appeals Court for the Fourth Circuit, and in December 2007, the United States Supreme Court declined to hear the case.

On 13 December 2012, El-Masri won an Article 34 case at the European Court of Human Rights in Strasbourg. The court determined he had been tortured while held by CIA agents and ruled that Macedonia was responsible for abusing him while in the country, and knowingly transferring him to the CIA when torture was a possibility.

It awarded him compensation. Which was fuck all.
This marked the first time that CIA activities against detainees was legally declared as torture.
The European Court condemned nations for collaborating with the United States in these secret programs.

In 2010 I got a MRSA infection. Spent 6 weeks in and out of hospital ending in organ failure and sepsis- nearly died. 2 months later I was back in again. 2 months after that I was back again.

On my 3rd admittance they had run out of antibiotics to give me. The doctors researched for hours to find something they could try. Dug up an old antibiotic with terrible side effects and tried it… it didn’t work. Luckily one of the ones I had previously tried and had a bad reaction to (during sepsis, so probably not the medication)- they tried again and it worked.

But being deathly ill while the doctors have no idea what to give you is a scary place to be!

11. There’s nothing more disturbing as a parent.

Thousands of children are sexually abused every day by adults they are supposed to be able to trust.

You might feel like the healthiest person in the world and yet still randomly die in your sleep. Sudden arrhythmic death syndrome is just one example. There are tons of small obstructions and irregularities that your heart could be suffering from that go completely unnoticed by you, your friends, and your doctors.

You might be at an increased risk of just passing on when you go to bed tonight, and no one would even suspect as much until you actually died.

Every single year, there are thousands of people in the US alone who disappear.

Most of them show up again; usually the next day but sometimes a few days, a few weeks or even a few months later.

However, out of these thousands of people, there are roughly 150 people – every single year – who disappear and… simply never appear again. Nobody knows what has happened to those people. They might be dead, they might not be, we simply don’t know.

Well yeah, it’s bad enough losing your job but it’s infinitely worse when you’ve got a chronic condition and your health insurance is suddenly gone.

Dylan Klebold, one of the killers of the Columbine massacre, attended the school’s prom three nights before the shooting. When he got home he was talking to his mom and showed her the flask he’d brought to prom, explaining that they’d only drank a little bit. He told her “I just wanted you to know you can trust me.”

It’s so chilling that he could say that and less than 72 hours later participate in the killing of 13 other people and himself.

A lone pilot was flying in Australia in 1978.

He reported to air traffic control that he was accompanied by an aircraft above him.

When asked to identify the aircraft, he replied “It isn’t an aircraft”.

His plane disappeared, and was never to be found again.

In just 1 kiss, over 80 million bacteria are exchanged

The average American consumes over 150 pounds of sugar every year.

2. I actually love this.

The Amazon Forest has a huge gap of virgin forest between Brazil and other countries, places kilometers away from the nearest cities. The Brazilian institute for native Indians (FUNAI) has got agents overlooking tribes and they take flights over the forest and always end up spotting huts, fire pits and bow-and-arrow armed men. There are plenty of unknown tribes hiding somewhere that huge forest. People never contacted by “civilization”.

The fun fact is even the Institute agents have no idea of number, types and tribes there inside. Can’t track down, account, or detect their genealogy.

Amazon forest is a complex and humid place, you can hide a family of elephants there inside and you won’t see it from the sky.

When you have scurvy, all your old scars and wounds open up, due to the vitamin needed to maintain scar tissue. So for me for example, I had my jaw dislocated and my gums cut open from check to check to remove wisdom teeth.

If I got scurvy I would bleed uncontrollably from the inside of my mouth out.

What would be your most horrifying scar?

I’m…I don’t know how to feel right now but it’s not good.