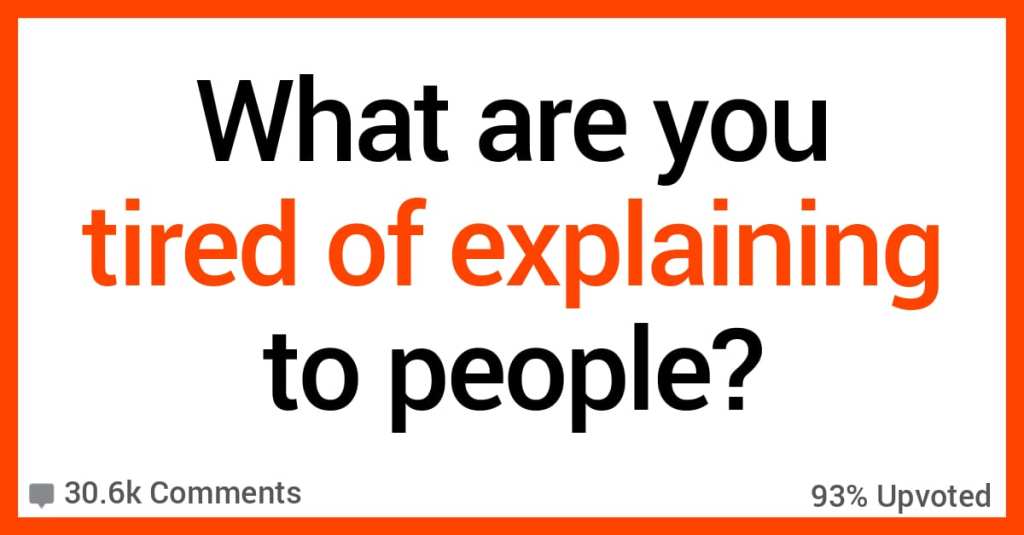 We all get tired of explaining certain things to people.

Maybe it’s work-related, maybe it’s some kind of religious or political belief, or perhaps it’s about something that totally unique to you that other people have no idea about.

Whatever the case, doing it over and over again GETS OLD. And it gets old fast.

Here’s what folks on AskReddit are tired of explaining to other people.

“I dont have kids, because I dont want to.

And that should be a good enough reason.

What’s insane is when some people go on to think that being childfree means you hate kids. I’m sure there are a few of those out there, but on the whole, it’s like saying I must hate elephants because I don’t have one.

“That I’m not a heavy metal, death riding biker because I have a beard, tattoos and piercings.”

“Why I left my “career” using my degree and decided to just to wait tables.

I’m so much happier honestly. F*ck the money and idea of moving up the ladder.

I’m never gonna be rich but I’m happier so that’s all that really matters.”

The pharmacy doesn’t decide your copays

No, I don’t just “put pills in a bottle”

Flu shots won’t give you the flu

“That depression is a very difficult illness to understand. It’s not like we can influence our moods to be happy.

“Why can’t you just be happy?”

“What a brilliant idea, depression no more!”

Just sickening to be honest. That’s why isolating myself from people is easier. No one wants to hear how hard it is.”

“That there are things called facts and that they are different from opinions.

That you can’t substitute opinions — even ones you really, really believe in — for empirically grounded facts. Finally, that expertise exists and that opinionation is not the same thing as having actual expertise in something.

And all of this might mean that your views might not be as valid as someone else’s who possesses actual expertise in a given area. Don’t feel bad or that you have been slighted in those circumstances.

Those times are learning opportunities. Take advantage of them, learn something from someone who is an expert, challenge your assumptions and grow a little.”

“I have Schizophrenia, and usually when I get to know someone I tell them I have it just as a little warning and what to do if it gets out of hand.

But before I can even explain that they always say “omg u have schizophrenia! So you have two personalities and kill people like that person from that one tv show?!”

No, no I do not kill people, the media has a sh*t representation of the condition. So I always then have to spend the next 20 mins explaining what it is.”

“That you have to wear a mask inside.

“Teenagers need 10-11 hours of sleep, because their brains are still developing, they also need to go to bed later because teenagers naturally want to stay up.

Sleep is important for brain development.

It helps prevent memory loss, weight gain, and likelihood of dying of a stroke or aneurysm.”

“What intermittent fasting is. I’ve been doing 20:4 (20 hours of fasting, 4 hours window for feeding) for over 3 years now.

It’s a diet and helps me controle an hormonal condition I have at the same time. Yet whenever people notice I don’t eat for breakfast and lunch, they’re like “omg you’re starving yourself!!!”.

No, I’m not. I feel great, even better than when I ate “normally”.”

“That there are more than two sides to many issues. The fact that I disagree with you does not prove that I agree with those you hate. There are plenty of people who are ridiculous in plenty of ways — and they’re all ridiculous.

“You either agree with me or it means you support——”

No, it doesn’t. I recognize that both sides are mostly made up of angry idiots.”

12. A lot of misinformation.

“As someone into fitness, and who has done a lot of research into food, diet, and have had to overcome many obstacles to lose a lot of weight and have the physique I have today.

There’s so much misinformation out there about ‘good’ and ‘bad’ foods, it´s insane…”

Why my vegetarianism is a ‘personal choice’ that can play into that and why it is not a conviction that I ‘desperately want to push’ on everybody.”

I can finish a month worth of your food in a day, still I will be skinny.

I just am skinny.”

15. Time for a history lesson.

“Abraham Lincoln was not a conservative.

The Republican party of the 19th century was made up of classical liberals. That is what they called themselves. The party was founded for the purpose of preventing the expansion of slavery in American territories.

I don’t know how anyone could believe that anti-slavery is a conservative stance. Slavery was a “traditional” institution. To be anti-slavery in the 19th century was to be against the wealthy elite.

It was an embrace of modern ideals. It can not, in any sense of the phrase, be described as a conservative movement.

Now, seceding from the US to prevent wealthy landowners from losing out on the profits of slavery, that is a conservative movement. Any push to retain the traditional way of doing things is conservative.”

What are YOU tired of explaining to other people?