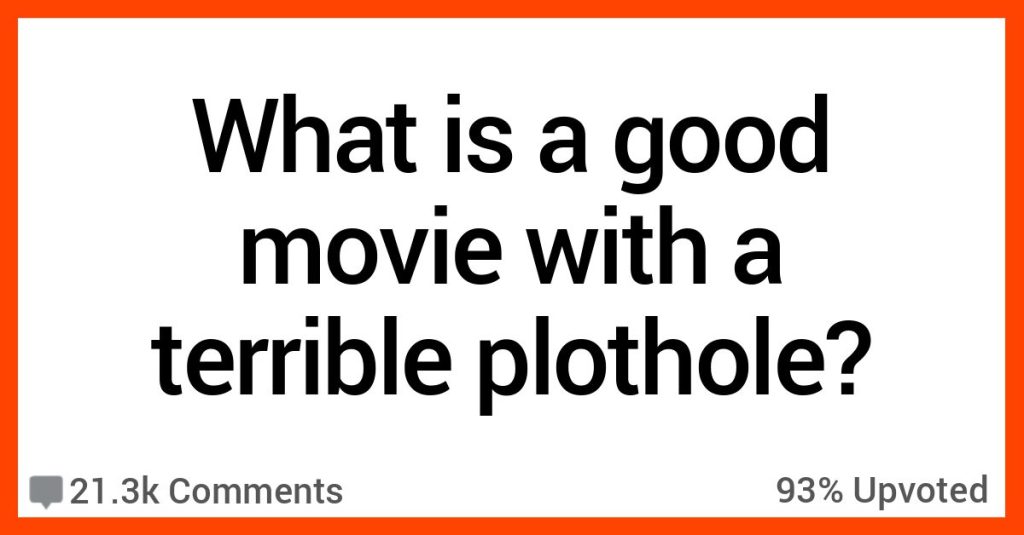 As a writer, there’s almost nothing that frustrates me more than a plot that seem perfectly solid, characters that seem engaging, but then the latter falls straight into a hole created by the former.

As a viewer, I’m more forgiving of a movie if I really, really love it – but that doesn’t mean we still can’t wish that plot hole had been shored up before the movie was delivered to the public.

These 15 people have some really great examples of movies they love – except for the one, gaping plothole.

IDK if that’s a plot hole or not, but how did a display airplane have fuel in the last wonder woman movie?

Not to mention, how they showed that the plane became untrackable just because Diana made it invisible. I really needed to suspend my disbelief there.

Also, how did Steve Trevor, who died in 1918, after having flown planes that were basically motorized kites, know how to fly a computerized jet plane from the 1980s? He would have been totally mystified by the very concept of a jet plane.

He wouldn’t even have been able to start the engine, much less fly it all the way to Egypt and land safely.

14. He was just waiting for the most dramatic moment.

In Finding Nemo there is never a lid on the fish tank so the pelican could have saved them all anytime he liked.

In Back to the Future. Doc paints a line on the road so Marty will hit the wire and get the lightning bolt into the flux capacitor at exactly the right time. The movie even says Doc has adjusted for wind resistance etc. BUT when Marty goes to drive the car won’t start. The alarm clock goes off and he is still stalled.

So technically Marty leaves late yet still hits the wire on time. So Doc’s math was wrong and no one said a word. If the car had not stalled, Marty would have been too early, missed the lightning bolt, crashed into the movie theater and never got home.

Green goblin wants to know who takes photos of spiderman when the photos literally say “Peter Parker” in the bugle.

In the amazing spider man game he makes some genuine sense Why wasn’t Rhino in a better cell? Why weren’t they told about the dangers they could have prepared for? Why is a security agency holding people hostage in base camps set up around the city?

J Jonah Jameson had actual facts and thoughts,he was just a little self centered at times though,plus I’d be a little suspicious too They don’t know anything about Spider-Man or his motives,he was also near a lot of crime scenes too

In “Cars” during the one-on-one race between Lightning McQueen and Doc Hudson. The policeman reads out the rules and literally says “No lollygaggin’”

What does Doc do? He friggin lollygags as Lightning speeds away! So even though Lightning falls into the cacti and has to be towed out, Doc should already have been disqualified from the race!

Lightning wins, he gets to fill up with gas and leave Radiator Springs, leaving Doc to fix the road.

10. Those other airports don’t exist.

Die Hard 2. Planes were circling Dulles for hours with no place to land.

Except, in that particular area, they are no more than a half hour from a dozen different airports.

I’m not even American and I know Andrews Air Force Base is only minutes away and has an entire military to clear the runway.

9. The fairy godmother had a plan.

Cinderella, she is told by the fairy godmother that everything will turn back to what it originally was at midnight.

Her dress, carriage, and horses do so why don’t her glass slippers?

Why would Skynet send its more advanced Terminators to the points in time when Sarah and John knew they might come after them?

At least for T1, I think Kyle explains that a lot of records were lost in the war so the dates for Sarah and John’s birthdays weren’t known and Skynet had to guess. Otherwise you’d assume it would send both Terminators back to when Sarah was a baby.

every christmas movie that centers around santa being real and adults not believing in him. Who is actually leaving the presents?

Because if it’s the parents, then santa isn’t doing his job, but if it’s santa, where on earth do the parents think the presents are coming from??

Everyone is covered in dirt in Waterworld

Paper is a mythical priceless substance, but they constantly smoke cigarettes rolled in paper.

The mom in that movie says at one point that people say her daughter is a mirror because she draws what she sees.

Later in the movie she is talking about things Costner has on his ship and she refers to “that reflecting glass” as though she doesn’t know what a mirror is.

Halloween 3. They show kids all across the US trick or treating. the ‘big show’ is at 9 o’clock (or was it 8?) but doesn’t mention other time zones.

The movie is set in California. So either it’s 9pm PST and the east coast kids are mostly already asleep and it’s just western time zone kids who die.

Or it’s 9 pm each time zone which would mean the east coast kids would die first and time zones further west would likely be warned in time to prevent further deaths.

I was about to say “she wouldn’t know how to write in English!” but then I remembered the contract written in literal English that she literally signed in English and just ……….

3. He didn’t carry him around, though, right?

Fred and George Weasley (and later Harry himself) having the Marauder’s Map and not seeing the massive Peter Pettigrew on top of Ron’s name for years.

2. They aren’t that good of liars.

Disney’s Hercules. Hades would have been able to check to see if Hercules actually died very easily. Heck, he was probably eagerly waiting to watch Herc’s soul end up in the Underworld.

Pain and Panic could NOT have gotten away with that lie.

While I’m at it, Hera and Zeus knew Hercules was alive, which means ALLLLL the other gods should have known

I love the MCU, but one plot hole I’ve seen in the movies comes from Ant-Man. In the beginning of the movie, Hank Pym explains that when you use the Pym particles to shrink, you have the same mass. This way, when Scott shrinks to an inch tall and punches someone in the face, it’s like being punched by a grown man, even though he’s very small.

Anyway, fast forward and there’s a scene where Hank reveals that he has a tank on his keychain that he shrunk using the Pym particles.

If this is the case, then how was Hank carrying the tank around if it still has its same mass? He shouldn’t physically be able to carry it.

It’s so frustrating, right? That said, I know these things can be harder to fix than they might seem at first – the forest for the trees and all of that.

What’s a movie that falls into this category for you? Tell us your vote in the comments!