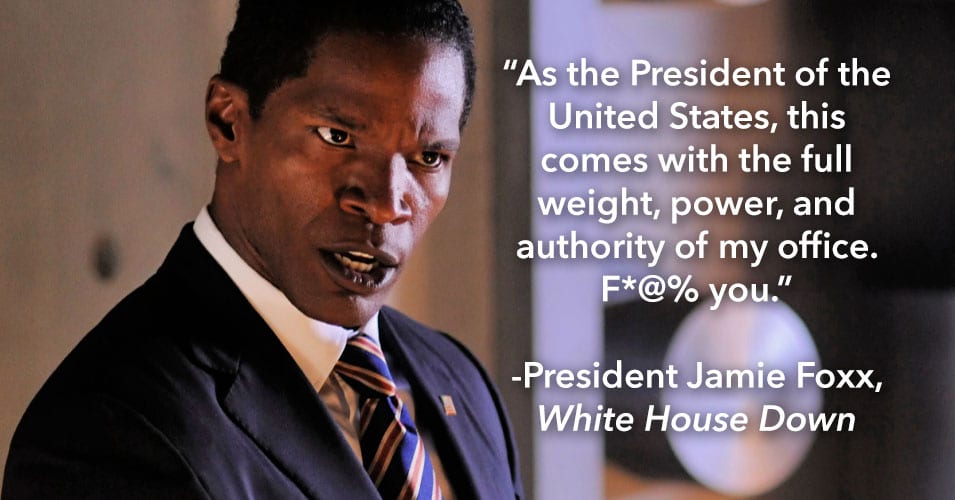 I love this topic, because even in the worst movie, there’s bound to be at least one piece of relatable dialogue or some moment that really deserves better than it got.

Think about it and I’ll bet you can come up with more, but these 15 are a great place to start!

15. There’s a bit of an uneven tone throughout.

“It’s the human species that needs to quit playing cowboy with nature. We must act more like astronauts, spacemen taking care of Spaceship Earth.” Birdemic: Shock and Terror

“Assumption is the mother of all fuckups.”

13. Creates quite an atmosphere.

“I feel like I’m sitting on an atomic bomb waiting for it to go off.”

I use it erry damn day.

Samantha: (Gina Davis) Easy, sport. I got myself outta Beirut once, I think I can get outta New Jersey.

Mitch (Samuel L. Jackson): Yeah? Well, don’t be so sure. Others have tried and failed. The entire population, in fact.

The Art of War – it’s not dreadful but it’s hardly great. Wesley Snipes goes a bit James Bond as a UN secret-ops agent/deniable asset, basically. It contains the brilliant line

“How do you give a medal to a man who doesn’t exist for something that never happened?”

7. Once Upon a Time in Mexico.

“Are you Mexican or Mexicant?”

From whatver the sequel to Desperado was.

“You can’t bench-press your way out of this one.”

-Phil Hartman to Arnold Schwarzenegger in Jingle All the Way

5. I’ve never heard of this movie.

4. You’re only the hero in your own story.

M. Bison: “For you, the day Bison came to your village was the defining moment of your life. For me… it was Tuesday.”

3. A matter of opinion, of course.

“What does God need with a starship?” Star Trek V, the absolute worst of the Star Treks.

“Do you think God lives in Heaven because He, too, lives in fear of what He created?”
Spy Kids 2

EDIT: put commas in the right places. Don’t wanna mess up a masterpiece like this.

1. Someone should use this in real life.

As the President of the United States, this comes with the full weight, power, and authority of my office. Fuck you.

There are way too many of these examples!

What’s your contribution? Share it with us in the comments!