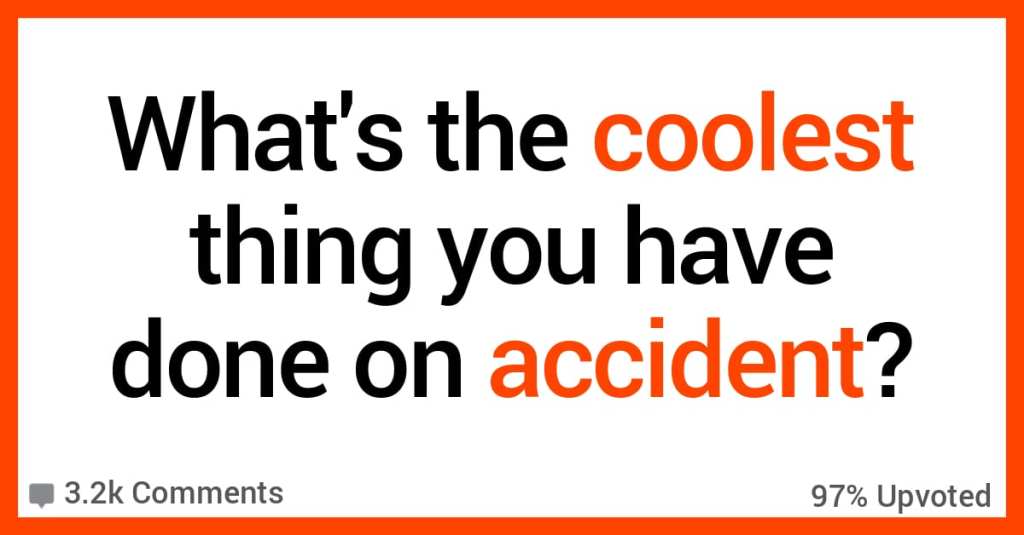 15 “Happy Accidents” People Have Never Been Able to Forget

When most of us think about the most memorable accidents of our lives, it’s probably not-so-good things that come to mind. The injuries, the total mess-ups.

If you think harder, though, you might – like these 15 people – recall some moments where completely cool things happened out of the blue.

When my brother was in college (I’m younger than him), I took a weekend trip up to stay with him. One night we went to a line dancing event with him and a lot of his friends. I felt very out of place and very uncool since I was a lowly high schooler and they were almighty college kids, so I kind of kept to myself and was just weird when I got paired with his friends.

Later that evening, we went to Waffle House to eat, and we’re all crammed into a small booth (about 7 of us). My brother shot a straw wrapper at me while I was in conversation with someone, and I threw up my hand to shield my face without looking. The straw wrapper landed IN BETWEEN my index and middle fingers, and it looked like I straight up Naruto’d him or something.

The whole table exploded in amazement, and that’s the biggest I’ve ever felt in my whole life. It’s been 15 years since that happened, and it’s one of my most vivid memories.

When I was about 14/15 I was rushing down the stairs and tripped about 7 or 8 steps from the bottom, going into complete freefall for a moment.

To avoid an extremely painful tumble, I instinctively reached out with my arm and happened to grab the newel post (the end bit of the banister) with my hand at the same time that one of my feet only just managed to make brief contact with a step.

The momentum then swung my entire body around the newel post, my foot lost contact with the step again, then when I finally came to a stop I had landed firmly on both feet and didn’t have a single scratch on me. One of the scariest moments of my life.

13. The right place at the right time.

I was a lifeguard on the ocean. I was having a pretty shit day, and on top of it my lunch was postponed an hour.

I headed up the beach to the nearest hotel to eat. As I was leaving the restaurant I heard a crowd of people screaming near the pool. As I came down the stairs towards, I saw a young child floating face down in the water. I immediately pulled the kid out and gave rescue breathing until the EMT could arrive.

The next day the parents walked down to my stand to thank me. They were originally told by their doctors they couldn’t have children, but a few years later were blessed with this young boy..their only child. The mother told me I was their guardian angel that day.

I’m not a very religious person, but this story still gives me goose bumps knowing that I was the right person in the right place at the right time for that boy. I started off angry about my lunch time change, but this was the outcome. 🙂

12. A moment that turns you speechless.

It’s either that or the time I gave my brother in law ball-in-a-cup for Christmas (based on a long-running joke we had, I honestly pick good presents). After trying it out for a good while and having no luck, he got frustrated and jokingly said it was broken.

To make him feel better, I grabbed it off the floor and said it took practice and that nobody ever succeeds at getting the ball in the cup right away.

To prove my point, I had a go myself and nailed it on my first try. Neither of us really knew what to say.

Was playing a game of beer-pong and randomly threw a bottle cap and hit the enemy’s ball straight out of the air.

There was a lot of confusion.

I felt pretty damn awesome in that moment.

I was taking a tour of one of the U.S government buildings, I believe the Capital but I’m not sure, during a school trip. During the tour, the guide showed us a chandelier and asked if anyone knew how much it was worth.

Flippantly, I answered something like 4.7 million like I already knew the answer. Turns out, it was the correct answer: the tour guide said “sounds like someone’s been doing his research.”

None of my friends believed me when I told them that I hadn’t already known the answer. I believed me though.

Drunkenly invested money into stocks… Made back triple that money.

8. The tea is really the kicker.

Christmas Party at a friend’s new apt. She’d made the place lovely, after her return from Italy. She’s set up her 1st adult Christmas tree. After dinner it’s time for pumpkin pie and hot drinks, I’m getting my tea.

From across the room I see someone accidentally brushed past the tree and it begins to wobble and spin heading for a fall with all of her hand blown Italian ornaments on it.

Somehow I cross the room, unspin the tree, set it back in its proper place (with all of its ornaments intact) and never spilled any tea.

7. This is absolutely hilarious.

I was sh*tfaced/rollin last Saturday night out at the bars, and heard someone screaming inside this cookie joint at like 2 am. So I drunkenly ran in because from the window it looked like an old friend of mine and I thought maybe something was wrong.

I get inside and decide I want to just surprise him by running up and hugging the fucking shit out of him from behind. So I wrap my arms around him and scream “GUESS WHO MOTHERF*CKER!” All of a sudden, the few other people in this cookie shop run over and tackle us to the ground! Im beyond fucked up, so I just lay there with my arms locked around my friend while people are on top of us. Someone then shouts “I got his gun”…

Yep….Not only was this guy not my friend, but he was in fact robbing this place. I had just drunkenly stopped a fucking robbery. Apparently when I hugged him and shouted guess who, he got so scared that he dropped his gun allowing the other people to rush in and subdue him.

We were playing a game of dodgeball, and since there were too much people on the benches, the coach decided to add a rule: anyone who can throw the ball directly into the basketball-goal (spelling?) can immediately deliver everyone.

I had one of the balls in hand when he said that, and the moment he signaled the game to continue, I threw the ball randomly (because I have the worst aim ever) and it somehow went straight into it! I never managed to pull it off a second time, but boy was I proud for the entirety of that day!

Once cut a fly in half while in flight. Pretty big house fly annoying me while prepping dinner and in my anger I sliced at the fly only for it to fall to ground in pieces, had to wash the knife afterwards though.

Target shooting at a friends house. He wasn’t having much luck with his new rifle so of course I was giving him shit big time. He got a bit frustrated, handed the rifle to me and said “If you can talk all that shit, here you do better than I did”

He told me to shoot the bowling pin that hangs by twine on the left. I sarcastically replied “I’ll shoot that bitch down by taking out the string” I put it up to my shoulder, aimed for the center of the bowling pin and pulled the trigger.

By some freak chance I hit the twine and the bowling pin dropped. I was celebrating because I honestly had not aimed at the twine. He was a bit salty until I told him that I have no fuckin idea how I hit that string because I wasn’t even aiming for it LOL

Someone tried to flick a lot cigarette in my face in front of a bunch of girls to be “cool.” Well I showed them because the cigarette landed in my mouth filter first and I took a drag like nothing happened.

Saved my friend’s life, and maybe doomed her cousin to death instead.

Ok, so this was the late 70s. My friend (and next door neighbor) and I were maybe 4 or 5 at the time. She had family visiting at the time, and the visiting family left their 2 or 3 year old son out to play with us in the front yard. (for sake of brevity, I’ll just say we were 5 and the son was 3)

Yep, you heard correctly, they left their 3 year old to be watched over by a pair of 5 year olds. This was back in the days when lawn darts were a kids toy and there were no mandatory seatbelts, etc.

So my friend and I were being 5 year olds, playing around and not watching her little cousin as closely as we should have been. Suddenly I see her little cousin, clad in nothing but a diaper, walk out into the street just as a pickup truck comes roaring down the road. I started screaming for him to come back. My friend, then alerted to what was going on, bolted into the street to fetch her cousin. I, purely instinctively, lurched forward and grabbed her dress and pulled on her, but only slowing her down. As she got passed the point of the parked cars the truck hit her cousin, killing him instantly, just a few feet in front of us.

Her family heard us screaming and ran outside to see their son lying dead in the roadway. That is the first time I ever heard the banshee wail of a parent that had lost a child. That sound…it’s not a scream, it is a sound so much more visceral, soul crushing and terrifying than any sound you can consciously make. I watched the boy’s father cradling his son’s body in the roadway like the dramatic death scenes you see in movies. Some seriously f*cked up shit for a pair of 5 year olds to experience. I don’t know how I am not more f*cked up than I am.

So, by pulling on my friend’s dress, I may have well prevented two deaths that day. On the other hand, she might have been able to snatch her cousin away to safety at the last second. I still don’t know which it is four decades later, and it haunts me. It is tough just to write/relive this. Especially since I had kids of my own. Those memories have taken on a whole other meaning.

Told my parents I would take the dog I picked up on the side of the road to the shelter after the three-day weekend (i think it was labor day).

Forgot to take her on the morning they opened back up and somehow she accidentally wound up living with us for 10 amazing years until she passed.

If you’ve got a similar memory, tell us about it in the comments!