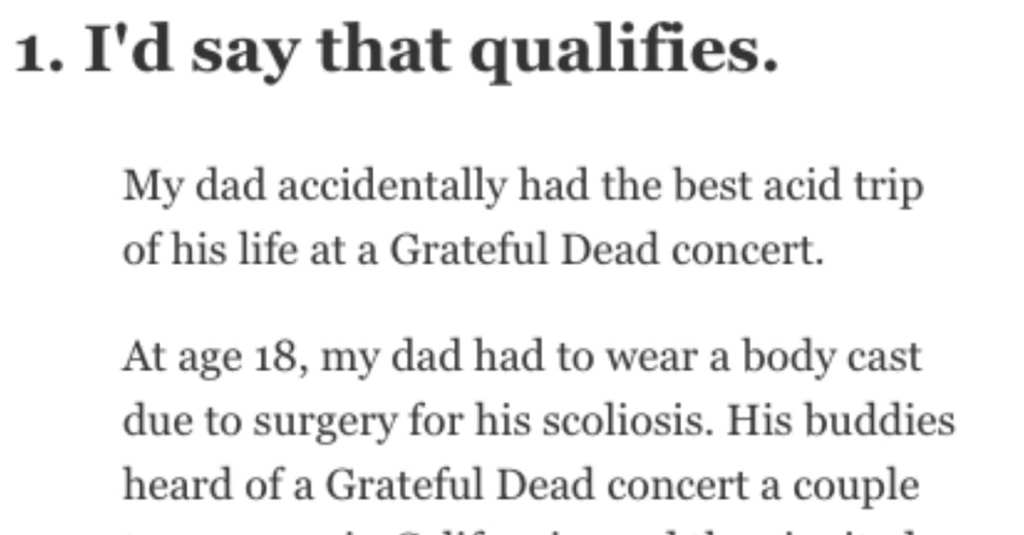 17 People Share the Coolest Thing They Ever Did on Accident

I love the term “happy accident.” It puts a positive spin on the accident, which people generally associate with bad things going down, but listen – sometimes, good things happen when we’re not expecting them at all.

Which is pretty awesome.

These 17 people are here to tell you it’s true – totally cool stuff can happen without you meaning to do it at all.

High school. Walked by 2 kids in the hallway. Kid 1 playfully threw water bottle at Kid 2’s back just as we passed each other.

The bottle bounced off and I caught it with my hand without looking or even turning my head, and I just had a blank nonchalant expression as I did that.

I handed it back to them with a poker face, but I was actually losing my mind and felt like Spiderman lol.

16. How you know you’ve chosen the right profession.

First bartending shift ever, picked up a bottle of fairly expensive liquor (Patron Añejo). Slipped from my hand, held out my foot to slow the fall of the bottle to lessen the spread of shattered glass, and the bottle ended up resting on my outstretched foot completely unharmed.

The one customer that was there (slow opening shift) saw the whole thing and freaked out, thinking I’ve been bartending for decades. I’ve never felt prouder of my reflexes.

I accidentally caught an interception in high school and scored a touchdown. I was just as surprised to catch it as everyone else since I was just crossing over and the next thing I know I see the football flying over me.

I instinctively reached up and caught it, and the only thing in my head at that point was “run” so I booked it and got a 60 yard touchdown

14. That’s some kind of divine intervention!

I was cooking once and my knife dropped from my cutting board. Reflex’s kicked in and I used my foot to stop it. Reflexes also used to much force (I’ve never been good at hacky sack because of this) and somehow not only did i not get stabbed but I kicked the knife back up and it ended up stuck in the cutting board. I had to just turn stove off and leave everything for about 10 minutes.

Threw a paper ball into the teachers mug instead of the paper bin. I peaked that day in seventh grade 😞

Scored a goal in a soccer game.

I’m lousy at sports. Always have been. But, in 7th grade, I signed up for a lunch break soccer tournament. As expected, I was awful. All I could do was run around and get in the way of the opposing team.

But one day, I was near the goal defended by the other team while nearly all the other players were heading back from the other end of the field. One of my teammates kicked the ball hard in my direction.

Someone yelled my name. I saw the ball. I put up my hands to block it, remembered that hands aren’t allowed in soccer, and ducked. The ball hit my head and bounced straight toward and into the goal, much to everyone’s utter amazement.

We won that game. I never played soccer again.

Bought someone a Coke without looking at it and it had their name on it.

I stopped a lady at a crosswalk because her underwear was hanging out of the back of her skirt (look like a mistake in the bathroom maybe). She stepped back off the crosswalk in about 2 seconds later a vehicle making a left turn at high speed smashed into parked cars right next to where she would have been standing.

She would have been dead.

9. The universe talking to you.

I got angry, so I crumpled up a receipt and threw it at the wall. It bounced off and landed in a vase on the counter. I stopped in my tracks and thought “well I can’t be mad after witnessing that.”

8. His kids thought he was so cool for awhile.

One time I was driving a kids bike in small circles.. so I went a bit too tight on my circle, ended up horizontal with my bike, ending up with JUST the side of the pedal touching the ground, did a full 360 turn, then popped back up like it was some 1000/1000 difficulty BMX move or somesh#t.

Like.. is that even a move for BMX tricks?? Not sure but I did it, completely on accident but still.

I hit my mate in the nutsack with a tennis ball from across a football field once.

Waitressing in college I was carrying a huge tray of dirty dishes from the dining room to the kitchen down a little hallway. I slipped on some water, went down hard on my butt but managed to keep the tray perfectly level and didn’t spill a thing.

Not a major achievement but kept me from having to clean for the next half hour.

When I was a kid, my cousins and I were outside and they were playing catch with a football. I was sitting on a chair not really paying attention, stretched out my arm to stretch and at the same time, my cousin missed the ball when it came at him.

I stretched out my arm and next thing I know I’ve caught it perfectly without even looking. With my non-dominant hand, might I add.

4. That’ll get your blood pumping.

Accidentally corrected a skid when I lost control of my car on an icy road. I hit my brakes too hard and noticed my car started to drift to the left.

Instinctively, I let off the gas and turned my steering wheel left, into the drift, and my car went back to driving in a straight line.

I had headphones in walking downtown a busy street, a kid almost hit me with his bike coming down the driveway so I stopped it by the handle bars.

The mom came running down the driveway and I was thinking “Oh great, a Karen.” After taking my headphones out she thanked me in a panic for stopping her son from flying into the street as a car passed by.

Never noticed it drive by.

Accidentally did a full 360 in my car while driving down an icy road in the winter.

Nearly shat my self while watching the telephone pole getting closer, but I saved the spin and kept driving along like I meant to do it.

My dad accidentally had the best acid trip of his life at a Grateful Dead concert.

At age 18, my dad had to wear a body cast due to surgery for his scoliosis. His buddies heard of a Grateful Dead concert a couple towns over in California, and they invited him along. My dad was laid flat in the back of an old Studebaker station wagon for the ride.

When they arrived, my dad’s buddies asked him to hide their hits of paper acid in his body cast so they could be discrete, since all of them had been arrested for possession prior.

My dad obliged and all was going well for a bit. Once the Grateful Dead started playing, my dad was dancing around, best he could, and began to sweat. Cue the paper acid being absorbed into his system and suddenly he’s tripping balls at a once in a lifetime concert.

We need more of these in our lives, don’t you think?

Has a happy accident stuck in your memory? Tell us about it in the comments!