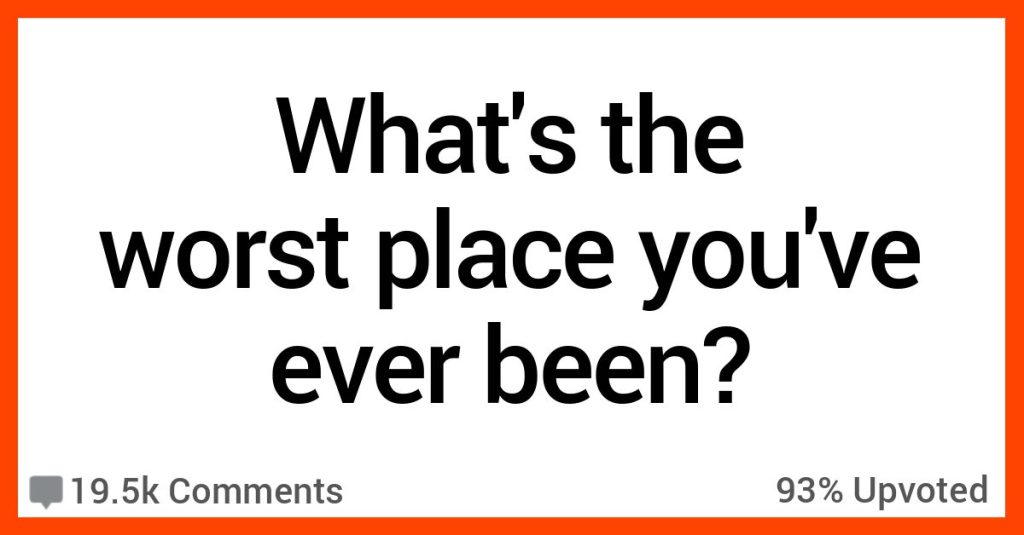 If you’re a person who takes road trips, or who travels across any country fairly often, chances are you’ve stopped in some pretty gross and sketchy places – or at least you did before you had to worry so much about other people’s germs.

It takes quite an impression, then, for a spot to earn the title of “worst” in your mind, right?

That should tell you something about these 15 places that these 15 folks will never forget (for all the wrong reasons).

Tashkent – Uzbekistan about 30 years ago. Was on a stopover flight from London to Delhi. There was literally piss and shit all over the floor in the toilets of international airport, and the whole area was horrible, filthy, stank.

Flew via Tashkent (unwillingly) 20 years later and was pleased to find everything was modern, clean and nice.

Clovis, New Mexico. It permanently smells like cow poop there.

I spent 4 miserable years in that s*%thole. Clovis is basically a giant meth lab next to an Air Force base.

Gary, Indiana. Apologies to those who live there, but it’s kinda like the armpit of America.

It reeks of a town that was once a cool place to be but has just been left to the wayside.

Killeen/Ft. Hood, TX. I was stationed there for three years, but I was in the Air Force. Don’t know how I got that lucky.

That place is an armpit.

Roswell, NM. It was a bucket list destination for me, but the town was such a disappointment. The Alien museum felt lackluster and the whole area gave me sad burnt-out vibes.

Bottomless Lakes State Park just outside of town was beautiful, though.

Went in late March, but was still very cold. Half the homes there are warmed by coal fires inside their gers (yurts). Every morning you could literally taste the pollution. Traffic was terrible, took an hour to go a mile during rush hour. Every car is at least 10 to 15 years old, and is imported from Japan, but they drive on the right side so the steering wheels are wrongly placed.

Getting out into the suburbs or the ger district, terrible conditions, I felt so bad for them. Do plan on going back, but this time in the summer when it’s not so cold. However, I’ve never met a friendlier people than Mongolians.

East St. Louis, Illinois. I worked on a project there for over a year and most of the town is a post apocalyptic landscape. Abandoned factories and houses, packs of wild dogs, and extreme poverty. We found a bloody clever in our porta potty one day. Witnessed numerous violent interactions with prostitutes, pimps, and John’s.

The soils around our worksite were contaminated with lead, gas, benzene, and just about any noxious chemical you can think of. The worst was the smells. On top of the usual garbage/burning garbage smell it alternated between a confection bakery and a dog food factory.

So depending on the direction of the wind it was either a sickly sweet smell or a smell we affectionately called “horse bacon”.

Honorable mention goes to Welch, WV otherwise known as Little Chicago. The town thrived in the mid-20th century evidenced by some cool old buildings. Now the town is run down.

Fresno California was pretty shitty when I was there in the early 2000s. I’d swear half the businesses in what I think was the downtown area were bail bonds places.

Despite the impression TV gives you that they are in the middle of a beautiful unspoilt desert, they are actually in the worst part of Cairo. Dirty, full of litter and polluted to buggery.

Getting off the coach you will be absolutely mobbed by beggers, scam artists and thieves. They will hound you every step of the way to the pyramids. I had one literally put his hand in my pocket and try to steal my smokes saying “my cigarettes! Mine!” They will beg anything off you on principle: if you are carrying a bottle of water they will beg you for it.

I thought Port Siad was bad because it looked like a bomb had hit it but The pyramids were something else.

I am sure Egypt is a lovely country with lots of natural beauty but Ciaro and the pyramids left a really bad impression on me.

Qatar. Terrible slave state with no culture of their own.

I was there for 6 months for work. Hated it. The glitzy glamour didn’t hide the rotten soul of the place. Some of my coworkers were blinded by the facade, but I and others saw right through it.

Definitely the fast food capital of Australia ….Dub Vegas or more commonly known as Dubbo. I know the locals will take umbrage at this but essentially it is a low joint with not a lot going for it apart from a great Zoo called the Western Plains Zoo.

The crime is high and brain cells are low. It is a dusty, hot s*%t hole full of young red necks in hotted up utes with big driving lights and a lot of chubby girls in pink shirts and denim jeans.

It has more McDonald outlets per capita than any other place in Australia. The best part of Dubbo is the Newell Highway going out of it..

The Tenderloin in San Francisco.

I’ve visited and grown up in some extremely crappy places but that area was the only place where I didn’t want to make eye contact with anyone and walked as fast as I could to get out.

People lying down in the middle of the street with needles sticking out of their arms, eating garbage, etc. It was another planet.

La Boca in Buenos Aires was pretty bad, too. The people seemed pretty happy, though, they were just extremely poor.

Tenderloin was like the end of Requiem for a Dream

Queenstown, Tasmania takes the prize for worst town in Australia in my books.

The place is a moonscape because acid rain from the mines killed all the trees, and all the topsoil washed away. Vegetation will never grow back.

The town itself has a terrifying The Hills Have Eyes vibe. Everyone I know that has been there has said it feels like you’re being watched the whole time you’re there. Personally, I’ve never hightailed it out of a place as fast as there.

Its three main tourist attractions are (and I’m not even joking); the ecological disaster that is the surrounding landscape, the slagheap from the mines, and the football ground that has a gravel playing surface because you can’t grow grass there.

A 0/10 town. I recommend having enough fuel in your tank so you don’t have to stop there.

Nothing but aging cement run down hirise hotels, breakfast joints, infinity t-shirt places and cheesy Ripley s believe it or not attractions .

And parking garages. And Crackheads.

These sound absolutely not delightful at all. Ugh.

What’s the worst place you’ve had the not-pleasure of seeing? Let us know in the comments!