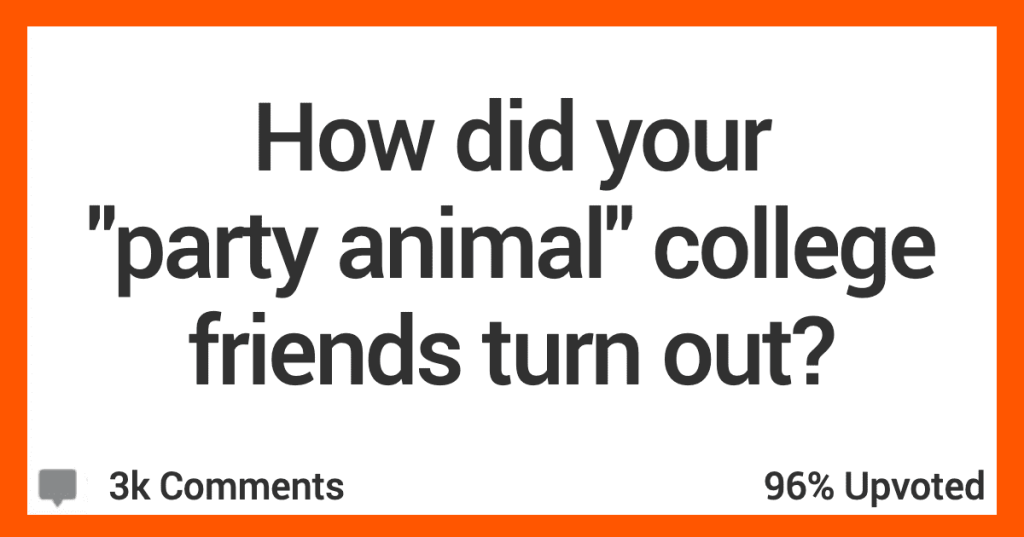 It’s not secret that, while people rarely actually change, they do grow and mature between high school or college and the rest of their lives. That said, some people take a bit longer than others to cross the threshold between kid and adult – if they ever make it at all.

These 15 people are recalling the biggest “party animals” they knew when they were younger and dishing on where they ended up – and some of the answers might surprise you!

15. Some people have all the luck.

His trust fund still pays more than twice my salary per month while he makes 200k at a large tech company with his communications degree that he got because his mom was friends with one of the board members.

She literally was dead for a couple minutes in the ER after a heroin od.

Miraculously they managed to revive her though, after which she went to some kind of rehab, I’m not sure we kind of lost contact by that point. She’s into plants and owns several cats now.

I am that person. Addiction, rock bottom, AA, sobriety, life

Just hit 150 days- the nights can get a bit boring but the achievement relief of beating back that day’s demon around the midway point of the evening when you realize you’re not going to drink or use – not to mention that kicka$$ morning feeling of starting each day fresh as a sober person – completely crushes the high.

12. It doesn’t work out for everyone.

He failed and got f**ked over by debts.

Works for some finance company making what I assume twice my income based on his house, car, and lifestyle.

He partied and f**ked off through college but if he had one thing going for him it was his ability to socialize and network, even in groups or topics he didn’t know anything about. That’s where I lacked.

Even with my GPA and grades, I think he still would have out performed me(position wise) had I stayed in that field. Goes to show the importance of networking over actual qualifications.

I briefly “dated” someone who was a constant partier and our dating was brief simply because he was always drunk when he came to see me.

I Googled him out of mere curiosity to see if he was doing okay and found out he ran over a mom of 4 and killed her one night (he was drunk).

Works for an investment bank and was published in the FT recently. Unless their habits have changed, that article was started an hour and a half before deadline and they did several ‘cheeky bumps’ throughout to keep them ‘focused’

7. The couple that parties together…

A couple. Over 5 years they traded their house for cocaine. They broke up. He finally wised up in his early 30’s, she was last known to still be a complete mess.

Her whereabouts are unknown, she may be homeless.

He decided to do a commercial pilot license. Spent so much money on the training and the partying that his debts overtook him. Here, most airlines don’t accept pilot candidates with outstanding debts or criminal records. He never got to fly a plane. He still owes a lot of people small to medium amounts of money.

I graduated ~15 years ago, and just saw someone I went to college with the other day.

She served me at Dunkin Donuts, and has no teeth. It made me sad for her.

4. Not unexpected, but sad.

He overdosed, blacked out and fell off a balcony at a hotel and hit the pavement so hard his mother couldn’t recognize him.

One is a doctor in his hometown. The other is a lawyer with multiple articles published.

2. Some people do turn it around.

that was me…. and i’m sober seven years now.

Know a few people who still party like college in their 30’s. It’s not been going so well for a few years.

One has multiple part time jobs all the time to try and pay for his reckless spending. About $400/month on bars, or more. $350 car payment. Rent for a trendy area of town. Lord knows what he spends on clothes. Has many, many credit cards maxed out and not paying minimums. He is really very sad about his life.

Another is less of a financial wreck but still doesn’t make a lot of money, and spends $400+ at bars every month. Routinely shows up to work late, with a hangover and smelling strongly of vodka soda.

Neither can hold a relationship longer than a few weeks. Neither is really happy with life. Both started to look fairly unhealthy around 30 and now look like zombies and have developed more medical issues compared to the ones in our old group who moved on.

I see a lot of posts about perpetual partiers living great lives, but at least in my experience, most don’t do well at all and are unhappy.

It could really go either way, I guess – not much gray area here.

If you’re remembering someone right now and have a great story, drop it in the comments!