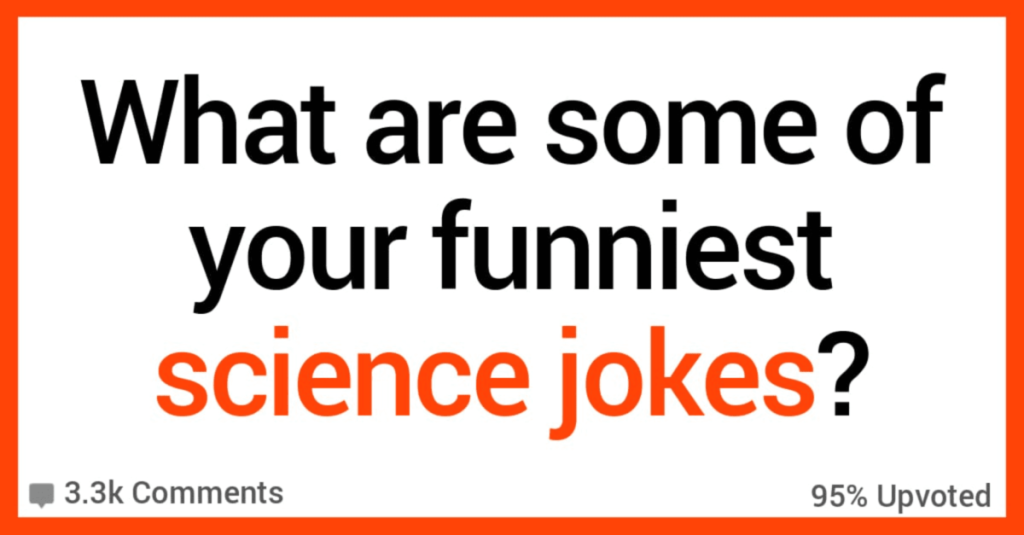 What did the nucleus say when it divided itself?

Okay, I can read the room. I’ll see myself out. But before I go, check out these 15 science-based jokes from people a lot smarter and funnier than me.

Ivan Pavlov is sitting in a bar. The phone behind the bar starts ringing.

Pavlov shoots up out of his chair and shouts, “Oh, shit! I forgot to feed the dog!”

2. A tale of two industries.

How do you tell the difference between a chemist and a plumber?

Ask them to pronounce unionized

3. Who needs counseling when you have Relativity?

Einstein and his wife were going through a rough time:

Einstein: “What can I do, I’ll do anything.”

Einstein: “And the second?”

4. It just keeps getting smaller and smaller…

An infinite number of mathematicians walk into a bar.

The first one says to the bartender: “I’ll have a beer.”

The second one says: “I’ll have half a beer.”

The third one says: “I’ll have a quarter of a beer.”

The bartender pours two beers and says, “You guys need to learn your limits.”

Why did no one say a word when the king farted?

Because noble gases don’t cause reactions.

Since light travels faster than sound, people may appear bright until you hear them speak.

Heisenberg and Schrodinger are traveling in a car when they get pulled over. The cop asks Heisenberg, “Do you know how fast you were going?”

Heisenberg replies, “No, but I can tell you exactly where I was.”

The officer takes this peculiar response as grounds to search the vehicle. Upon opening the trunk of the car, he finds a dead cat.

He then asks the two men, “Did you know there was a dead cat in the trunk?”

Schrodinger replies, “Well, I do now!”

8. It all depends on your perspective.

A physicist, a biologist, and a mathematician are outside of a house. They see one person go in, followed shortly by two people coming out.

The physicist says, “The second person must have been inside the whole time.”

The biologist says, “The first person must have spontaneously reproduced.”

The mathematician says, “If someone goes inside, the house will be empty.”

Until you multiply yourself times the speed of light squared.

The smallest change can make the biggest difference.

Two chemists walk into a bar.

The first one tells the bartender, “I’ll have a glass of H2O.”

One of them lived.

Not sure if this one has been said but:

What do you get when you cross an octopus with a cow?

A call from your ethics committee and the immediate cessation of your funding.

My mom will be proud of me, I got an A+ on my blood test.

13. Even particles have faith.

I didn’t even know they were Catholic.

The punchline comes before the joke.

You know what the worst thing about time travel jokes is?

He used to be a chemist, but now he is no more.

For what he thought was H2O was really H2SO4.

Nothing like a burning brew of sulphuric acid to start your day.

Do you have any clever science jokes?

Show off your brains and share them in the comments below!