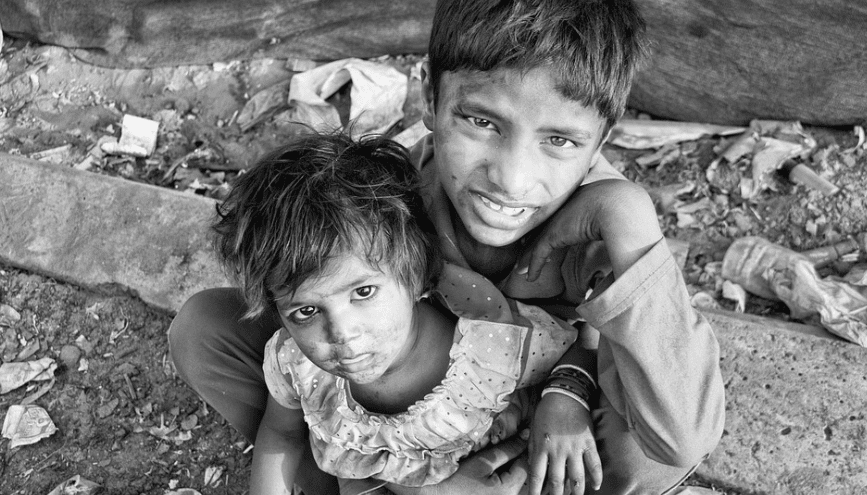 Even though you might not see it or notice it all the time, poverty in the U.S. is rampant. And there are some things that you only know about and understand if you grew up poor.

AskReddit users weighed in on this topic.

“Pre-cut Christmas trees are free on Christmas Eve. I remember the Christmas tree hunt on Christmas Eve was like our little family tradition. We would drive around in the evening looking for stores that still had trees sitting out front. Nine times out of 10, when we would ask about the tree we were interested in, they would say “just take it,” glad to get rid of them by that point.

Every year we had a perfectly beautiful tree and it was exciting to find perfect trees for free and then stay up late decorating it with home-made glitter pine cones and candy canes.”

“If you send a bad check to the utilities company on a Friday you have power for the weekend.”

3. No one will stop them

“Most gas station attendants will not stop a small child from stealing toilet paper from their bathrooms. Who knew?”

“Libraries can save your life.

The first part of my childhood I would get home from school, usually to a vacant house. I really wouldn’t know if I was even going to see either of my parents each night. No cell phones of course. But I was always afraid… nervous at least, of what would happen if they did decide to make an appearance.

I started walking to the library everyday after school and staying till they closed every night just to avoid the feeling of anxiety for a little longer. Eventually one of the librarians noticed and took a liking to me. I think she might have been through similar things in her life that she saw in me. Gradually we got to know each other. First I started noticing there were more books being added in the genres that I liked. Then one day after the library closed, I walked over to McDonald’s.

I was a quarter or so short to buy a hamburger and she saw me asking people if they had any change. I saw her and was embarrassed and kinda hid from her. From that point on I think she decided that she was going to take me under her wing. For over a year she would come by my desk at the library and just drop off chips, granola bars, pop, whatever you know? Of course, I would tell her I didn’t need it, when in reality I only knew where one meal would come from each day.

When I would ask her where it came from, she would just say it was extras from the break room, even though I could hear her in there putting coin after coin into the vending machine. Eventually she would just bring dinner every night to the library and we would sit down in the break room with each other and eat. I finally opened up to her about my family/living issues and had her to talk to. Even though I was still pretty guarded, this was a huge relief. THEN, after I had been there almost 2 years, it was the week before school started, and I headed into the library.

Before I left she told me to meet her outside after close. I did, we walked to her car, and she pulled out a brand new school backpack, and inside was a new outfit, binder, and shoes (my first Nikes). That’s when I broke down, and my walls crumbled. She was a single lady working off a librarians income, but she still made room for me.

For 3 years she supported me as much as she could, and she was more of a friend than I had ever experienced up until that point in my life. She is the number 1 reason I got out of that house and life. She was with me at all my adoption hearings, and made sure I was put with a nice family. She was at my graduation, and my wedding. She saw me grow up and succeed in life after coming from the bottom. She saw her work and love pay off. I went to her funeral this summer and it felt like I had lost my mother, but I couldn’t stop reflecting on how much she changed my life through her sacrifice.

Truly an amazing person, and I still donate to the library every year.”

“How good a buttered tortilla is.”

“IDK about in other states but in Minnesota they can’t shut your power off during the winter because of the danger of someone freezing to death in their house. So that was a good time to try to catch up on some other bills you are way behind on too.”

7. All kinds of things

“Government cheese, doing your laundry in a bathtub using only cold water bc the gas was shut off, trying to spend the night at your friends house bc they had food and a warm room, (thanks Nikki) loving going to school because you could at least eat there, trips to Goodwill for “new” clothes, showers at school because at least three water was warm.

Being made fun of because you smelled like kerosene, having lice and no one doing anything about it, going to school with bruises bc your parents took their shitty decisions out in you. I’m so grateful to a handful of people that saw potential in me, I went to college, got a great job, and broke the cycle . Thanks Tom and Toni.”

“Pizza nights are the best birthday present you could ever fucking get.

A whole pizza, ordered exactly how you like it, and you get to have more than one slice.”

When I was a kid , if you used food stamps they would give back the change in food stamp form. My Mom was too “proud” to publicly use them so she would make up a reason to leave & I would have to pay using them – I was 11 or so. She did it every time…I had to learn to keep my head up.”

“That sometimes your parents sacrifice everything they have, including their sanity just to see you happy. And you only learn later in life the soul crushing existence of poverty. Then you wonder how they managed to do so much with so little.”

“When you get home and see a yellow notice hanging off your door you’re fucked. It’s always on a Friday to so you’re out of luck until Monday.”

“What hunger really is. I remember waiting for my dad’s payday for the grocery shopping trip and being absolutely ravenous when the food got there.”

“Witness to the adage “how much you really do have”. Major fire wiped out several hundred million-dollar homes. Heat generated left rubble of two-story homes only feet high. Families devastated. I still see the face of one man so completely shattered, I wondered if he would live to be able to rebuild.

I later was in the Command Post area when I was approached by a young girl and her Father. The Dad couldn’t speak English, so the girl would translate. “My family wants to know if this is where we can bring donations for the people whose houses burned down?” To my working knowledge, none had been established at that point. Her Father talks, she translates: “can we leave it here? Many roads are being closed, and we’re not familiar with this part of town.”

I walk with them to their car, a much older beater, the Mom and a couple of siblings in it. Dad opens the trunk, and together, we all bring out couple cases of water, canned and dry food, adult and child clothing, some used toys, and prepared food. Almost list it when each kid handed me their toys. Little girl: “we have so much stuff and we want to share with those families.”

14. Work with what you have

When I started college, one of my professors asked if anyone in our class remembered how you changed a channel on the TV before remote controls. I was the only person in the room who remembered turning dials and adjusting rabbit ears despite being one of the youngest students in the class, because my family had a TV from the 70s until 1995.

Same sort of thing with computers, phones, etc. If we had it at all, we got something much later than anyone else (after it got cheaper) and bought used. I got my first computer in 1999. It had Windows 3.1 and that was what I used until I was able to use my financial aid to get a new PC tower for college.”

“Knowing the cheapest thing on the menu at every restaurant, for when your friends’ family invites you out to dinner. Even though you’re not paying, you’re programmed to only select the cheapest thing. My friend’s mom said “you sure like hot dogs. That’s all you order no matter where we go to eat.”