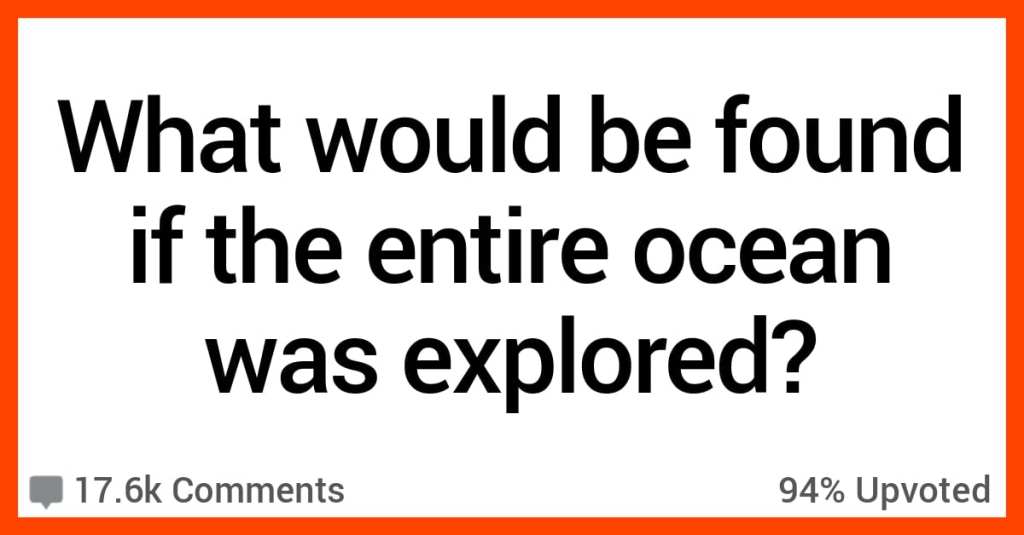 I’m not smart enough to be a scientist, but if I was, I think being an oceanographer would be fascinating.

Some folks are afraid and uncomfortable in the ocean, but I love being in it and around it as much as I can.

And, on a side note, did you know that over 80% of the world’s oceans have not been explored?

That’s a lot of water!

People on AskReddit talked about what they think would be discovered if the entire ocean was explored.

“There’ll be loads of lost archeology going back to the last Ice Age and beyond.

Human settlements were (and still are) often on the coast due to the abundance of food, and coastlines constantly get eaten away. We know of many underwater ruins, and most have been lightly studied by divers.

We can’t easily excavate on the sea bed though, so imagine the artifacts that lay buried. We often build on previous settlements as well, so I would expect if we could excavate the sea bed properly, we would probably be able to paint a far more accurate picture of early human endeavors. Maybe even uncover some mind blowing surprises?

No-one cares enough to put up the money to develop the equipment and expertise to do it though. Fingers crossed we one day get an Elon Musk type whose more interested in history than space.”

“Probably some pretty cool large squid species which is cool.

Also there are multiple reports of pretty massive eel like creatures in the deep ocean but no pictures or specimens have been found.

I’m hoping we find one of those before I die.”

I watched that shark week Discovery Channel special they put out about discovering a megaladon with “video proof” like 10 years meant to spoof people, and I totally thought it was real.

I was visiting my home country when I watched it and was too scared to fly over the ocean to go back because I didn’t want to crash into an ocean with megaladons.

My husband had to talk me down off that cliff.”

“People are talking about crazy monsters and stuff, but I’m just thinking we’d find a ton of missing ships and planes and be able to put a lot of mysteries there to rest.”

“I have a dumb hypothesis that I love.

There is a phenomenon known as “Deep Sea Gigantism” where many shallow water invertebrate creatures have absolutely massive cousins at the bottom of the ocean (giant squids, giant isopods, etc). Well one species that seems to be missing a larger cousin is the octopus.

There are giant squids, but mysteriously no octopus. Additionally cephalopods (family which squids, cuttlefish, and octopuses belong to) have no known “maximum” size, and generally die based on when they are k**led or self-sacrifice for their offspring.

Lastly, if they had a longer lifespan, their high intelligence would allow them to be as smart as dolphins or possibly humans where they to live long enough. So why haven’t we found anything? Well there’s one thing that octopuses are well known for and do better than any other creature on the planet: stealth.

So what I’m saying is the Kraken is real and we should worship the Great Old Ones.”

“In order from most likely to least likely:

Invertebrates visible to the naked eye (known or unknown species)

Something lost, unknown, or previously undocumented that is of broad public interest

Most of the ocean is unexplored because the ocean is huge and most of it is boring. Not the most fun answer.”

“Fish, mostly small fish. Inch long fish with teeth meant for eating other inch long fish that people will share close-up pictures of and say “this is why I don’t go in the ocean.”

Keep in mind that while we haven’t combed over every inch of water, a lot of the open ocean is the ecological equivalent of a desert: most of the life is small and hardy, because being anything else risks starvation.”

“I wanna believe that we’ll find some type of actual Kraken or a giant shark or something.

I know we probably won’t but that would be cool and terrifying at the same time.”

“Maybe the UFO’s that the pentagon has been talking about.

I think most of the released footage\photos have been taken at sea.”

“A sponge living in a pineapple, a squid that plays clarinet and a sea star that would be hired then immediately fired by a crab who sells burger patties who also has a whale as a daughter.

And did I mention a squirrel from Texas?”

“Giant tunnels that lead to pockets of air filled caves with it’s own weather system that sustains not only plant but weird looking creatures.

And more giant crystal caves like the one in Mexico.”

They’re gonna develop a nuke and plant it in the earth and explode the earth’s inner core ending all life to start a new age.”

“Honestly, probably not all that much.

All the most vibrant and diverse ecosystems are going to be in water shallow enough that plants can get both sunlight from the surface and nutrients from the sea floor. Once the water gets too deep for sunlight to reach the bottom, it kinda transitions to the underwater equivalent of the Sahara Desert.

There’s probably a little bit of down there scraping on off volcanic vents or what washes down to them from the surface waters, and given the extreme conditions, it’s probably really weird and interesting life, but I wouldn’t expect the deep sea to have anything like the biodiversity of the Great Barrier Reef.

Yes, we’ve only explored a small portion of the ocean if you count by physical volume, but if you’re counting by interesting discoveries to be made, we’ve probably explored quite a lot of it.”

About 10,000 years ago we came out of a mini ice age. The oceans rose and flooded coastlines. This was the “Great Flood” we see in the Christian Bible and other religions too.

IT wasn’t a sudden flood as the biblical and other stories would have you believe, but happened fast enough that the story was told into legend.

Since a lot of civilizations are situated on the coasts, they were swallowed by water.

We would absolutely find lost civilizations under water.”

What do you think would be discovered in the deep, dark ocean if all of it was explored?