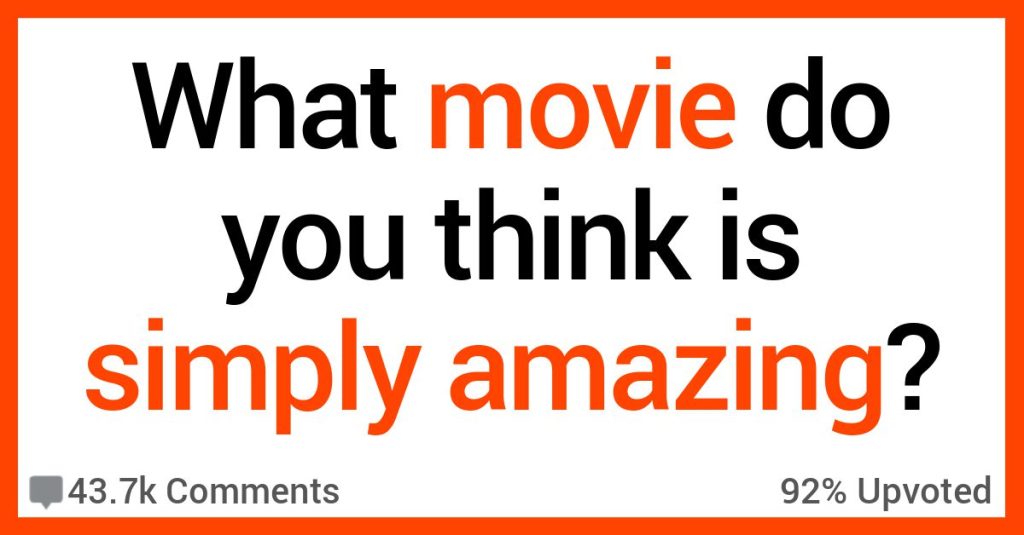 15 People Talk About the Movies They Think Are Simply Amazing

What are some of your favorite movies?

Films that you think are perfect in every way?

Some of mine are Taxi Driver, The Terminator, In Cold Blood, Election…I could go on and on…

AskReddit users talked about movies they think are amazing.

I thought it was going to be boring when I first had to watch it, but man it was just so captivating and still holds up so well over 60 years later.”

It’s weird how much harder the lessons hit when you’re an adult.

Ferdinand tried hard to find a purpose on the farm. He realized that the animals who do work are not eaten, so he figured if he made himself useful he could survive.

Later, when looks through the window and sees another duck cooking, realizing that it was chance alone that spared him, his eyes are opened.

It didn’t matter how hard he worked or how useful he made himself, he would only ever be a duck in the eyes of the farmer. The system would never let him win. So he chooses to drop out of the whole thing.”

“The Hunchback of Notre Dame.

I cannot state enough how much it saddens me to see this movie go so unappreciated. The animation is gorgeous even by today’s standards.

The songs are great. There’s not much I can say bad about it. I just kinda wish more people were into it.”

I’m thirty-two years old, and every time I hear that music play and Alan and Ellie see the Brachiosaurs for the first time, I’m immediately transported back to being a five year old.

There’s no movie that has better captured that feeling of sheer wonderment.”

Just the first one — too many people conflate or confuse it with the rest of the trilogy.

And it stands alone. Even with faux-Gotham it’s a perfect snapshot of the late 1990s, from the interior sets to the music to the hip-urban-vampire aesthetic going on then. Snipes’ schtick worked around a solid enough plot.

Few movies have better continuous-sequence choreography that — this is key — gets as outlandishly inventive. It defines beat-’em-up; even better than Burton’s Batman. It’s impressive and schlocky in all the right places.”

The plot, the music, the acting, everything about it seems like a real life fairytale.”

Amazing. Starts with 40 minutes with no real dialogue.

Nothing else really ever gave me the same sense of childhood adventure.”

“Back to the Future will always be a pure spectacle of filmmaking.

I’m 38, and I first saw that movie when I was 10 years old, and I would still watch it from start to finish right now.

Very few movies have that distinction for me.”

“Not a single movie, but a trilogy…

Anyway, the Bill & Ted movies, Excellent Adventure (1989), Bogus Journey (1991) and Face the Music (2020). Keanu Reeves and Alex Winter as two high school slackers who must travel through time and face D**th and other obstacles to become the saviours of mankind.

It reminds me of my teenage years, of simpler times, and the fact that if two slackers can save mankind, so can I.”

11. From The Master of Suspense.

“Rear Window. I think it is easily Hitchcock’s best movie, and he made some great movies.

Jimmy Stewart is a s**y older man. Grace Kelly makes you stop breathing when you first see her and she is awesome playing a gorgeous woman who is every bit as smart and adventurous as her boyfriend. Thelma Ritter is a great character actor.

The tension in the movie is almost unbearable and yet it is also full of great, light dialogue. Every time you watch it something new jumps out at you.”

I’ve seen it a hundred times but even now when I re-watch it I always spot something new.

Like a joke I didn’t get before, or a reference I never noticed.”

Watched it at the theater when I was younger and fell in love with it. Still my favorite movie and have watched it hundreds of times.

It it a masterpiece of filmmaking? Not at all, but I love it.”

I used to throw 5th of November parties as a sort of a Halloween encore.

I’ve seen it 20+ times and I still laugh, get chills, and tear up every time.”

The story, the hope, the despair, the music. It feels like it could have been based on a real event.

What movies do you think are simply amazing?