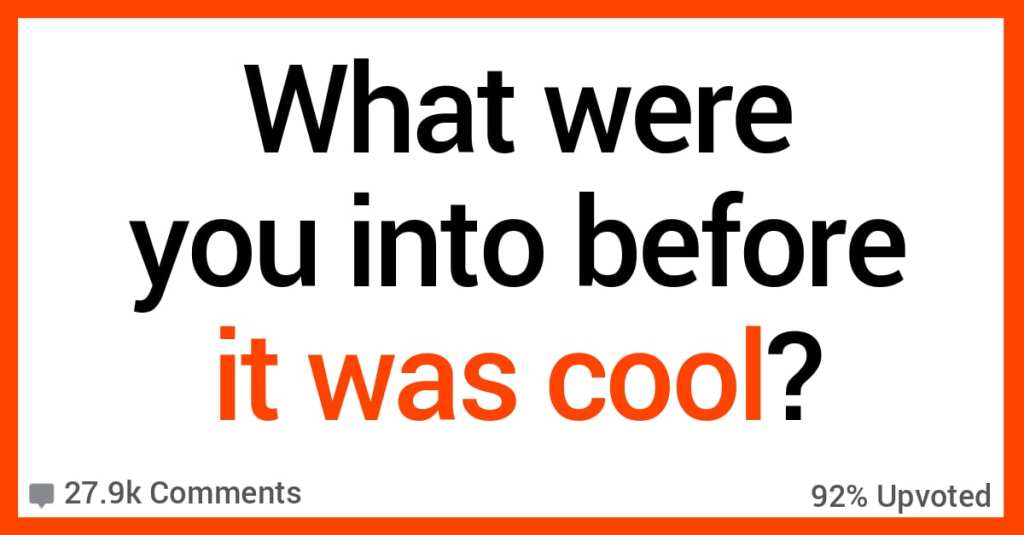 You’ve no doubt heard people brag (or humblebrag) about being into certain things before they hit the mainstream.

Movies, music, artists, etc. People always like to make sure that everyone out there knows that they were into it WAYYYYYY before it got popular.

But some people really were into stuff before everyone else knew about it.

What were you into before it was cool?

“Snapchat. I downloaded it when it was in its early stages..and then deleted the app shortly after because none of my friends were on it.

I still have people asking me how I got my username.

“I went to a bar a long time ago (illegally- I was below drinking age) to see this punk band play. I liked it enough that I shelled out for one of their cassettes (pre-CD).

The band was Green Day.”

“I got stoned with John Mayer in a college town before he put out a CD. He was playing the blues at a club in front of 100 people and i only caught the last song.

We got high and he gave me a cd and wrote on it…. few weeks later I put the cd in and quickly tossed it out.

So I was early adopter of John Mayer playing the blues, AND throwing out his trash studio albums.”

“I was into vinyl before it made a comeback.

And since nobody in the ’90s or early 2000s wanted their records anymore, I basically got 500+ records for free or nearly free.”

“I was reading Harry Potter from like, day one. I remember how this happened so clearly. My dads birthday landed on the same day day that the book was released in the US, September 1, 1998, and we got him a gift certificate to Barnes and Noble, among a few other things.

The very next day, my dad and I went to Barnes and Noble. He picked two books, one was a New York Mets coffee table book and the other was the newly released Harry Potter and the Sorcerers Stone, which he handed to me.

There were stacks and stacks of them on a display table right at the front of the store. He mentioned that he had read an article about how good the book was a few weeks prior, and that it would be releasing in the US soon. We were in the store for all of five minutes.

I read the first two chapters on the way home, and was immediately hooked. I swear I read that book a dozen times before going to the midnight release of Chamber of Secrets the following year.”

“Saw Metallica for my first concert in 1985 on the Ride The Lightning tour in Austin Texas.”

He was part of a comedy group called Derrick Comedy that was absolutely hilarious.”

“I once did a Google search for Eminem and it came back with zero results.

I was an editor at All music at the time and emailed my higher ups to tell them he needed a listing ASAP.”

“I was chugging Pabst Blue Ribbon years before it became the go-to hipster brew.”

This account is rather recent but I discovered the platform in its infancy. It had less stuff back then but the discussions were better.

And then, mainstream caught up.”

“When I started college in 1993, the first real big party I went to was a sorority party with a band. I was there before they went on, and when I saw they had a saxophone set up on stage, I (having played alto sax in hs) set my beer down on the stage in front of where the sax player would be.

They wound up being really good live, and a few weeks later the Dave Matthews Band first album came out, and I bought it first day.

I’ll never forget taking that cd home at Christmas break and playing it for high school friends who said “WHAT THE F*CK IS THIS SH*T?” The next year they all apologized because they were all into them once they got popular.

I saw them a few times, but after they got super big I really didn’t like any of their new material and quit listening to them. The last time I saw them I remember seeing Daisy Fuentes outside the theater interviewing people after the show and had a feeling they were about to be a big MTV band.

However, from time to time I’ll hear an old tune of theirs and will remember when I thought they were very cool.”

I never liked drawing but loved coloring, so as I grew up I would seek out all kinds of coloring books. I loved how calming it was, and I would often color with my grandparents so I created a lot of fond memories there.

I got made fun of a lot for my hobby until it suddenly became cool in the last few years.”

I was living in Austin before it went nationwide and after moving back to the Midwest, it took a couple years for the mass release before it really took off.”

“My white suburban mom did yoga back in the 1970’s when it was considered “a hippy thing”.”

“I was out for the night back when I was 17/18/19. A friend and I went to a good pub in Oxfordshire where we thought we’d have a chance to pick up some girls.

Ended up getting drunk, taking an E and listening to the band who were pretty good. After their set we popped out of the pub for a quick joint.

The band walked over and asked for a toke. Ended up spending the rest of the evening In the back of their van smoking weed and drinking.

Turned out that the band was an unknown indie/rock group called Radiohead. A couple of weeks later Creep went international.

Been a fan ever since.”

What were you into to before it became really popular?