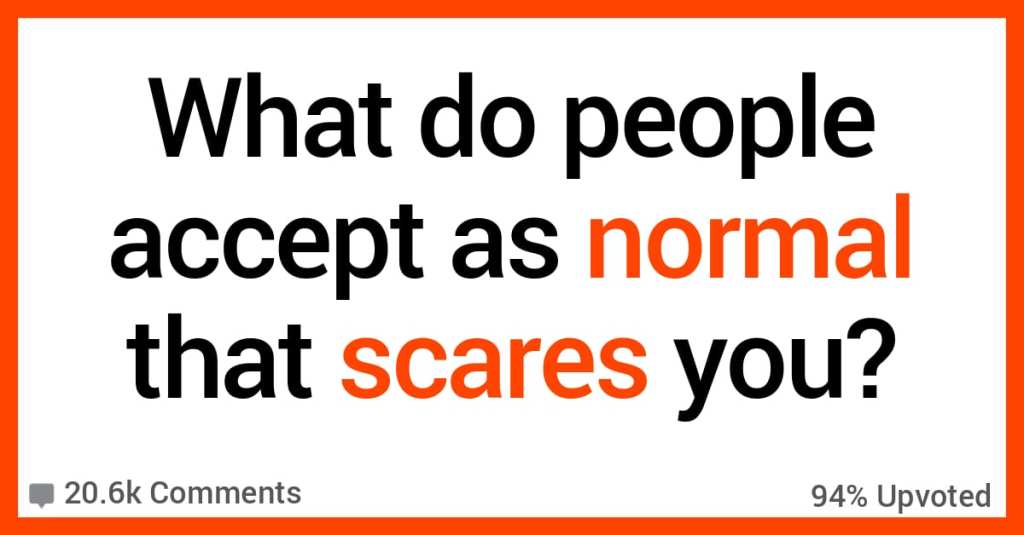 I’m gonna go out on a limb here…I think a lot of things that people find “normal” are genuinely frightening.

I won’t get into specifics, but a lot of things that people just accept related to politics, religion, society, and the way folks behave in general SCARES THE HELL OUT OF ME.

And I guess I’m not alone…because it seems like a lot of people are freaked out by things that most of the population views as “normal.”

Let’s see what people said about this on AskReddit.

“Watching our rights slowly get taken away and people consider it normal is definitely one of my great terrors. Like privacy.

I mean, less than half a century ago people would have considered it conspiracy theories to say that companies know everything about you, your location and sh*t, and they sell your data all around.

On that note, there’s a book called The Circle that is basically like a modern version of 1984. It’s terrifying, and the reason so is because I could actually see it happening.”

“Putting every single life event or happening in your life on social media.

People literally trying to do things so that they have something to post.

And those weird people that ask you to post pics of them on your social media. “Make sure you post that photo of us.””

“Animal factory farms churning out antibiotic-resistant bacteria as a result of raising animals in deplorable conditions and close quarters while overusing antibiotics.

It’s absolutely terrifying yet we as a population accept it.

This will be a major health crisis in our lifetime and we’ll all act so shocked when it comes.”

Images of plastic building up on eastern coasts

Amazon still burning and being cut down as we speak

In the area I live in in Germany, we have had really dry summers in the past years which is not normal. It has always been a popular joke that it’s always raining here, but now I can’t even remember when was the last time it rained.

All the dry weather has been a catalyst for Bark Beetles killing off our Bark trees, which led to the government cutting any and all of those dead trees down. Now there are open gaps, spaces, or wounds how I see them in areas where trees should stand but don’t.”

Icebergs melting at an alarming rate.

The thought alone makes me stressed out.

I just can’t with my own life, let alone another human being.

I don’t have the mental health, money nor time for it.”

“The amount of littering that happens and how caring about the environment seems to be considered a “liberal” thing.

That, and also just a general disregard for others.”

“Straight up alcoholism being the “normal” in college.

My ex literally couldn’t function without a white claw or a mimosa in the morning. When asked she said “Whoever calls me an alcoholic I’m cutting out of my life, I know my limits.”

There’s a reason she’s an ex.”

I don’t know if I would say that everyone accepts these as normal, but the fact that they are still around and still pretty popular is concerning.”

It genuinely disturbs me that most people treat life like it’s a game and the only thing that matters to them is winning and getting ahead even if it means letting people around them suffer.

I feel most people lack empathy and are sociopaths but people still lie to themselves believing they are good people.”

“There are almost 10,000 active nuclear weapons currently. Any one of them going off could trigger a global thermonuclear war.

We’ve only barely managed to avoid this happening on many occasions in the last 75 years.

We seem to forget that a man-made apocalypse is potentially hours away, and only staved by the hands of a few flawed humans on any given day.”

“The fact that most men are made fun of and degraded for having feelings and emotions.

All you’re doing to them is making those men cold and hurt and angry. This is abuse, and, yes, it has very damaging and long lasting psychological effects. You’re not making them ‘tough’ or ‘manly.’

You’re just teaching them that it’s bad to be human, and that, in turn, teaches them to be cold and emotionless towards others, sometimes also leading to violence towards spouses and children.

Because of social media most of what you find being spread is instantly taken as truth. Having a 24/7 news cycle doesn’t help either. It seems like people are losing critical thinking.

Any difference in thought is seen as intolerance.”

The fact that some older folks know exactly what’s happening to them too, is especially terrifying to me. Working in a memory care facility the same year my grandma went downhill and then passed was a real doozy, and hard to process being only in high school.

“Healthcare being a privilege rather than a right in a first world country.

It being ok for the leaders of our country to lie and focus on lining pockets rather than helping people.

Racism – explicit or casual. The fact that working full time at minimum wage doesn’t provide enough for a person in this country to live alone and cover all bills/needs basically anywhere.

Anti-intellectualism. Politicization of a pandemic.

All of these are shockingly normalized for vast swaths of the US, and that’s terrifying – both in general concept and because of the future implications.

I could go on but I’m not in the mood to be livid tonight.”

What do you find scary that most people think is normal?