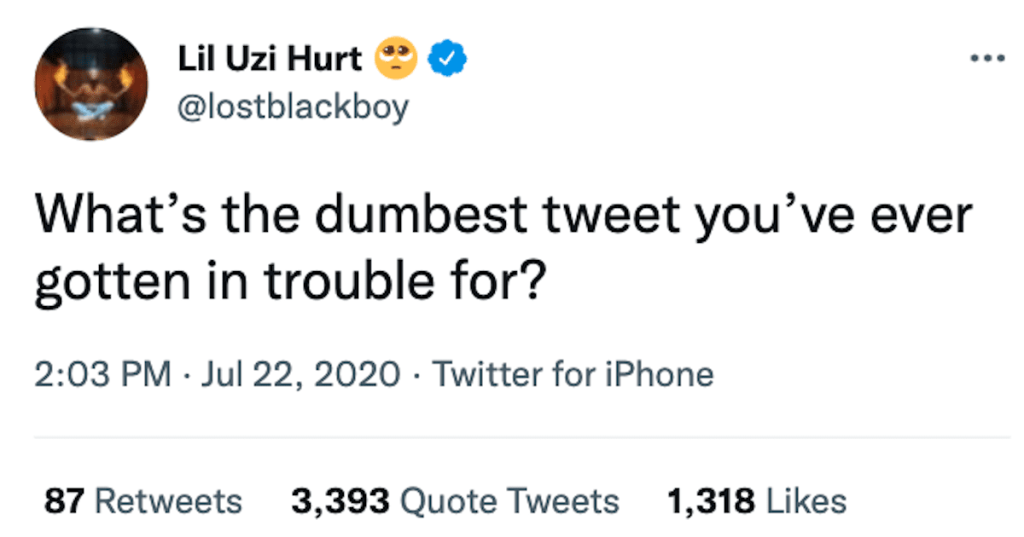 Every social media outlet is different, with its own unspoken rules and required nuance for posting and interacting with other users. Twitter is no exception, and there most people realize you’d better tread lightly on almost every topic, or risk the pile-on whether deserved or not.

This is the tweet that kicked it all off…

What’s the dumbest tweet you’ve ever gotten in trouble for?

These 15 people learned the hard way, and it doesn’t matter one bit whether or not the tweet that landed them on this list was pretty silly to begin with.

15. Yeah people are touchy about that.

someone said “chris delia is funny thats a hill i will die on” and i said “then die” https://t.co/qTiBmS5Wdr

But we know some people aren’t too keen on believing that these days.

for some reason a guy from the Bachelor got real upset about this. then came the Nazis. https://t.co/hSRRK3U32j pic.twitter.com/qo3pmMEb67

13. OK but that’s really funny though.

I’m surely not the only one who laughed!

Replying to a fishing with explosives video with this https://t.co/eaYejO9gqs pic.twitter.com/6EMYNyzomr

12. I would have expected it to be faster.

It was a joke, people. I mean probably.

it took them 20 hours to find my moms email and call me all kinds of slurs https://t.co/AqcyLe7zsd pic.twitter.com/GAb7iJqYtg

The answer is obviously way too many people.

I was berated for *liking* this tweet from a St. Louis newspaper photog https://t.co/jHEd5UKqEy pic.twitter.com/iXnT067rjx

He could have chosen a whole array of different foods.

I was called classist and ableist for this one https://t.co/iBVKw2QI3n pic.twitter.com/Zlpx68AB4p

9. Watch out for the stans.

adam driver stans wanted my head on a stick bc they said i stole their tweet https://t.co/IpMbqSV4KB pic.twitter.com/Wci9d3VwCS

8. Everyone has to make their own choices.

But you should know you can and will get berated for them online.

woke up to so many angry messages asking how i could do this in the middle of a pandemic lol https://t.co/w9QSNfzNpC pic.twitter.com/oUJuFYJGdc

But the point remains.

I said car sex was for people that don't pay rent and got accused of kink shaming once https://t.co/QzNmq0i9qp

It was just a lucky guess.

apparently a lot of tucker’s audience has super special leather jackets that make them feel like they’re in top gun https://t.co/IEWedPjiEq pic.twitter.com/kRDQex8z3z

You cannot avoid it.

the amount of men in my dms telling me how much they hate women was really cool! https://t.co/rN4Pz9tjSc pic.twitter.com/3e5dqFyLzl

4. This one is pretty silly.

Definitely just a funny shower thought most of us would share!

this one i guess?? people were so convinced i was being 100% serious. but also the phrase "friendly reminder" really is a pet peeve of mine https://t.co/aVsollW4Ff pic.twitter.com/g1ZqyMnaqN

3. You should have seen that one coming.

People are sensitive about their culture for some reason.

2. The response is classic.

That’s the only way to survive on Twitter, y’all.

But I can definitely see why people were upset.

I wish I could say that this surprised me but it really doesn’t.

Have you ever made a misstep on Twitter that ended up costing you? Tell us about it in the comments!