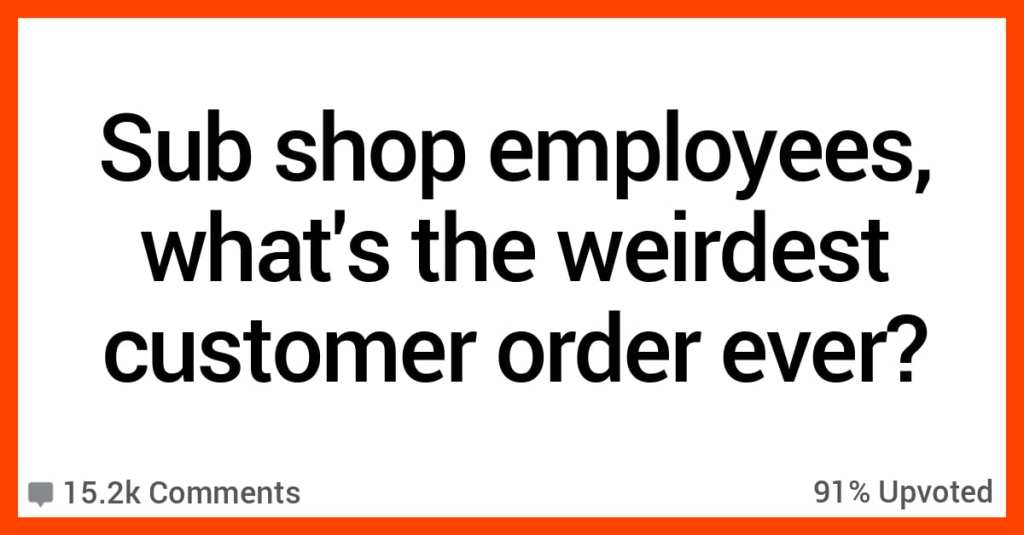 I’ve never worked in a sandwich shop, but I have waited tables, and let me tell you – just when you think people can no longer surprise you, they definitely will.

There is no shortage of weirdness when you work in a customer-facing role, but even so, these 15 sub-shop orders are pretty out there.

15. I’ve been pregnant and this seems extra.

Don’t work there any more, but the one order that sticks in my mind above everything else was one time a guy came in on the phone to order two sandwiches and he explained one was for his 7 months pregnant wife so to please make it right, he has a list of exactly what she wants. So I made it exactly how it was written down, then made his and he paid and all was good in the world.

Then maybe ten minutes later the phone rings and I answer it and there is this woman on the phone just screaming at me telling me I made her sandwich wrong and how she wanted ranch instead of mayo and blah blah and that she would send her husband in to get it remade, ya know full Karen minus the “let me speak to the manager” bit. So the guy comes back in and I immediately recognize him and he’s apologizing profusely explaining that his wife is pregnant and hormones and whatnot, and I assured him I’ve been yelled at for less it’s no big deal I’ll remake it at no charge, he has the offending sandwich, I remake it right and throw the old one away, and as I’m ringing up the order(even though it was free it still had to be rung up at $0 for bread count accuracy) the phone rings.

So I hand the man his sandwich and answer the phone and there is this woman on the phone hysterically crying on the other end and so I ask if she’s alright and she informs me that she called earlier and she felt horrible about yelling at me because she realized she wrote it down wrong and it wasn’t my fault and the whole time I’m just awkwardly telling her that it’s okay, no big deal we got it taken care of, you’re okay don’t worry about it, It’s no big deal. And then she, still sobbing, asks me straight up “do you forgive me?” And I said “it’s all good no worries” and she said “No. Do you forgive me?” And I said “yeah dont worry about it” and she asked again “but do you forgive me?” And I replied “yes, I forgive you. Have a great night ma’am.” After which she hung up.

I still remember that even seven years later because it was the only time I’ve ever had a customer call back not only to apologize, but crying about it as well. Ironically for the question I don’t actually remember what the specific sandwich was, I wanna say it was an oven roasted chicken breast but I truly am just taking a shot in the dark.

We ended up cooking a slab of dough and throwing some cherry tomatoes on top. He then proceeded to use the pizza crust as a plate for his tomatoes, then threw the crust away after finishing his tomatoes. We had a salad bar with the exact same tomatoes as well.

13. The customer is always right.

We had frozen egg disks that we were supposed to heat in the oven. I say egg, but really it was more of a frozen circle of egg whites with a yellow piece in the middle (that may or may not be missing depending on luck of the draw).

This one guy would come in every shift I had and order just the egg circle, but didn’t want us to heat it up. We handed him hard, frozen, disgusting looking, disks that sounded like rocks when banged against the counter, covered in ice flakes.

He barely spoke English, so the first time he showed up we were very confused to say the least. But once we understood he was very happy with his egg hockey pucks.

Back in High School, I worked at the local subway.

Every night, 30 minutes to an hour before close, this large African American man built like an NFL linebacker would come in, and no matter how many or what kinds, would clean out whatever was left of our cookies for the night.

“just condiments. All of them, if you don’t mind.”

My town had a lot of foreign exchange students from South Korea and they would always order the meatball subs with scoops of “seafood sensation” which was just mayo and imitation crab. Then have it toasted, it smelled horrible.

Also had a guy that could barely talk he was so high wanted every sauce on his chicken bacon ranch, it was more soup by the end. Then he gets to the register and he remembers he doesn’t have any money and walks away. My manager actually asked anyone if they wanted it.

I worked at Subway many years ago. There was a couple that would come in semi-regularly and she wanted just a double helping of American cheese on white bread. No veggies, no condiments. Just cheese. I never charged her for the extra cheese since I figured the veggies she wasn’t getting offset it.

Eventually she started asking for more and more cheese until it was easily 10x what came on it. She must have been bummed when I quit. That cheese sandwich probably would have cost about $10 if someone who gave a shit rang it up.

Worked the night shift for Subway during college. Had a regular come in at 3am usually that would request that we toast the shit out of his sandwich. I’m talking the whole thing was basically charcoal.

First time he came in while i was on shift, I pulled his sandwich out of the toaster and he told me to put it back in…and again… and again. I thought he was a drunk guy fucking with me.

Apparently he really liked the taste of burnt everything. Grossed me out, but as long as he paid I didn’t really care.

I worked at a subway a long time ago and a guy would order two full bags of lettuce on his sandwich every day.

Imagine 2 pounds of lettuce on some bread.

He would order often enough that I knew to go in the back and grab two full bags just for him.

This one guy used to come into my sub shop at least twice a week.

Always ordered a steak and cheese with extra, extra ketchup. Except you couldn’t put enough ketchup on it.

We could use over half a bottle and he would still come back and ask for the bottle because “packets took too much time.”

5. You can never have too much lettuce I guess.

My wife worked in the student center when we were in college. I was hanging out with her once while she was closing up an event, and the school catering was there cleaning up their leftover food. I think they had had a build-your-own taco line set up, so there was this giant bowl of shredded lettuce.

A girl came up to the catering staff and was like “oh are you guys just throwing that lettuce away?” They said they were. She said “I’m a vegan so I eat a ton of lettuce, can I have it?” They we’re confused but said sure. So she went over and got a plastic bag from the chick-fil-a and dumped that whole bowl of lettuce in there and went on her merry way.

I worked at a Burger King my junior year of high school (Not a sandwich shop, but play along). I was on specialty board (chicken and fish mainly). This order came through for an original chicken with “HHHH mayo”. “H” in the training stood for heavy or extra.

I asked my manager if it was a typo and they said no this guy comes in once a week for that sandwich. I swear, by the time my manager said the sandwich was “proper”, the mayo was thicker than the chicken patty itself. I felt like I needed to bathe afterwards.

Was getting breakfast at this place called “The great Canadian Bagel Company”. The girl ahead of us gets a breakfast sandwich with extra mayo and then says: “like a serious amount of mayo, more than you think is comfortable”. The guy does a solid 4 servings and she shakes her head in disgust/shame and is like “No.. I’m actually messed up, I need more mayo”.

Took everything in me not to laugh as it happened.

Basically, just a 1/4lb beef patty with like a half cup of pickle slices on top of it.

1. Learn something new every day.

This one kid brings in a bunch of tupperwares at the beginning of his shift. Weird, but I don’t care.

End of his shift (edit 3: not closing time, we had a line-up) and his mom shows up to give him a lift. He starts filling the tupperwares with chili.

Turns out his mom tried it one day and loved it. Whole family tried: they all love it.

They’d made a deal with our boss to buy bulk chili every week.

I would…never eat these abominations. Just. What?

If you’ve got a story to add to this heap, we’d love to hear it in the comments!