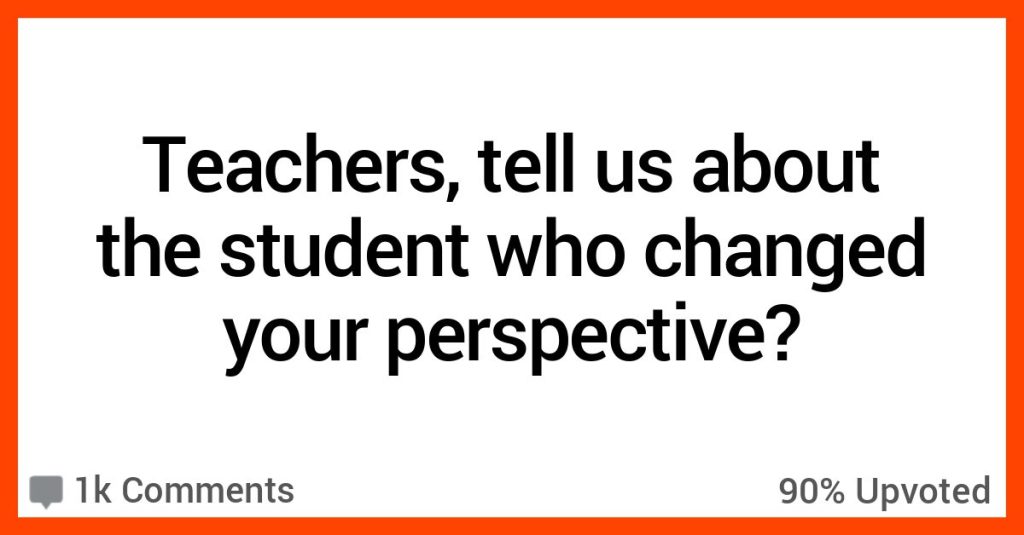 15 Teachers Describe the Students Who Changed the Way They Teach

Teaching is a career that’s extremely rewarding, and also one that can break your heart – and sometimes it’s the same student who gives you both experiences in one.

These teachers thought they knew what they were doing or how to handle their classrooms, but these 15 students can along and showed them a better way.

“It was a grade one to two class. I asked the class my first ever question, and a student gave me a totally wrong answer. I said, ‘No, that’s wrong.’ Watching eagerness turn to disappointment was enough to never say an answer is just wrong again. I felt physically sick.

Usually, I now say something like, ‘It’s going in the right direction but not there yet,’ ‘I can see how you might think that,’ or, ‘I like that you are looking for a connection to what you already know.’

Besides, if I taught the concept better, the student probably wouldn’t have gotten confused.”

“This one was actually with a parent. I had a teenage student with traumatic brain injury due to shaken baby syndrome. The father was a rigid police officer with seemingly no empathy or patience. I assumed that he was involved in the incident that caused the disability.

Turns out, the person who caused it was a teenage babysitter. The parents will have to support their child for the rest of her life due to one fateful night trying to share some time together. It taught me to never judge the parents.

You never know what they are coping with.”

“I teach 11th-grade US history. On top of hybrid learning this year, my boyfriend started to show symptoms of bipolar disorder. I had to call 911 because I was afraid he’d hurt himself or others, and he was taken by the police to a hospital. He stayed for a week, and I missed some work. After, I was talking to my students, and my absences came up.

I told them the details of why I had been out and the symptoms I saw in my boyfriend. I said it’d been hard, but mental health is a priority we addressed for his well-being, and I was glad we did. Later, one student came to me during lunch and said as he listened to me explain mania, he felt that I was describing him. I decided to be open about my experiences with mental health and ask my kids how they’re doing mentally thanks to everything brought on by COVID. We’ve had some amazingly beneficial venting sessions. As things are getting back to normal, I want to keep checking in with my kids’ mental health.

I went into basically the ugly details For about 10 days, he was entering a severe manic episode: he stopped eating, stopped sleeping, his mind seemed to be racing 24/7, he would get emotional and cry, he’d scribble his ideas on scraps of paper and leave them all over the apartment, etc.

He’d been somewhat manic before but never to this degree. He was experiencing severe psychotic symptoms. This was the first time he was ever diagnosed with bipolar disorder. He ultimately got medication and became stable again.

They were all so attentive as I talked about it. The student who confided in me had also failed my same class the previous year. He was quiet, reserved, and, before this, he didn’t talk to me much. We made small talk and I asked him what was up and if everything was okay when he opened up. He felt frustrated because no one at home knew what emotions he was going through. He was afraid that his parents would think he was crazy.

I told him I was glad he shared his thoughts with me and that I believed it would be beneficial if he talked to one of our school counselors about it. He agreed, and we arranged for him to meet with one.

They gave him emotional coping mechanisms and referred him to a mental health doctor. He would come and visit my room every once in a while during lunch to catch me up with how he was doing mentally. We all need mental health check-ins.”

“The need for preferential seating — my first time working in a primary special ed class opened my eyes to this. Many children couldn’t sit still in their chairs for a minute. I was losing my patience.

One day, my student said her brain wouldn’t let her sit still no matter how much she tries to tell it to. A lightbulb went off in my head. I should’ve known this! I got floor cushions, exercise balls, etc. I even let kids lie down on rugs during writing and/or reading.

Oh, and they could stand during lessons or do stretches to get their wiggles out. It helped the kids immensely.”

Offering a choice, even if it seems like the smallest thing, can be so empowering and teach important life and independent skills.

Neurotypical children have the privilege of making countless choices a day, and we take that away from our disabled students.”

“I think all of my students impact my teaching in some way because every student learns and behaves differently. The biggest change I’ve made is probably giving students the chance to share. It seems so simple, but it makes such an impact.

It started with a student notorious for acting out. I had him for a 90-minute reading lesson, and other teachers told me stories about his behavior. I started the class but saw his hand raised, so I let him share. He told a five-minute story about his family, then he participated well in the lesson. I started giving time each lesson for all students to share.

It took time, but I’ll give up ten minutes of my lesson for student engagement the rest of the time. My goal is to always meet them where they and learn what works best for them.

“My first year as a teacher, I constantly prompted my off-task third-grade student — actually tapping his paper. Then one day, I watched him work on a problem that no one had solved. He was diligent in his work — trying again and again — until he eventually found the answer.

As a class, we celebrated. As a teacher, I learned to open my mind, and my eyes, to what learning can look like. I never tapped another paper.

It’s been sixteen years, but I know without a doubt that every success I’ve had as an educator is credited to that young man.”

“During parent-teacher conferences, a parent once told me how thankful she was that I grade using colorful markers with smiles, rather than X’s. She said her son hated the color red because his previous teacher would mark his papers with huge red X’s. In my class, her son came home much happier to show off his colorful smiles.”

“I always called my kiddos things like ‘sir,’ ‘ma’am,’ ‘love,’ etc. One day, a kid asked me why. I explained that it was to show respect. He replied, ‘But I don’t like it.’ It made me realize that I was putting my own thoughts of respect and kindness onto the kids without ever asking what they wanted.

After that, I always ask what they prefer to be called and if they are okay with nicknames or terms of endearment. It is surprising how much a little act like that changes a relationship for the better.”

“Distance learning was hard. My frustration was evident, as was the frustration of my kids on a daily basis. We implemented a social-emotional curriculum, and one lesson focused on identifying our emotions, naming them, and calming down.

We practiced as a class often, but it was so much more effective when I actually used those strategies in front of my kids when I was frustrated. Rather than just teaching them, I started doing each calm down strategy. My kids started doing it, and parents mentioned how it helped at home.

Sometimes, the best teaching is just by leading by example.”

“I was thoughtlessly using the phrase ‘parents’ in my classroom. In my second year teaching, I had a transfer student who was a foster child. He was very withdrawn and not interested in connecting because he had been bounced around. The first time I said ‘parents,’ I saw him look away. I felt awful because I just hadn’t been thinking. From then on, I said ‘your grown-up.’ The very next time I sent something home, I said ‘your grown-up,’ and he smiled a little.

He began opening up a little in class and even made a couple of friends. It was a little thing for me to do, and it really helped him feel a sense of sameness with his peers.

I always look at every bit of information about my students’ background now so I can make them feel safe and included.”

“College professors give anywhere from two to five exams in a class. We try to space them evenly apart but fail to realize every professor is doing the same thing in their class.

For the student, that means having multiple exams in the same week or day. Sure, we want them to be disciplined and organized so they can handle an exam load like that – we tell them ahead of time when their tests will be! However, that’s still asking a lot of young adults who are learning discipline and organization but don’t necessarily have the skill yet.

So, instead, to help them practice, I tell them on day one to look at all of their class, athletic, social, etc. schedules for the semester, identify any points when they think they will have a hard time juggling everything, and let me know in the first three weeks of class if they want to reschedule any of their exams with me, no questions asked.

After that three-week period, they can only reschedule exams for normal university-allowed excuses.

It gets more students to look ahead and plan, and their reward for doing so is a bit of the burden being taken off their backs.”

2. No more homework for points.

“My first year teaching, I gave homework worksheets at the end of each class period. They were short and fairly straightforward, but I had one student who never did them.

However, he paid attention in class and managed to do well on tests. I found out toward the end of the year that he had to work a job after school to help provide for his family so he had no time to do homework. After that year, I stopped grading homework completely.

I still give it for students who needed more practice, but it’s no longer graded because I won’t know their home lives.”

“Hunger! So many kids are hungry during the school day. Some of my students have blood sugar problems, don’t have food at home, and can’t afford lunch. Some are just growing a lot.

I’ve had snacks available for students to eat for years. I don’t make them ask for them, and not a single student has ever taken advantage of it.

It’s an out-of-pocket cost but completely worth it. It feeds hungry kids and cuts way down on ‘hangry’ behaviors.”

These stories break and also warm my heart.

May we all be as open to learning from those around us in the future!