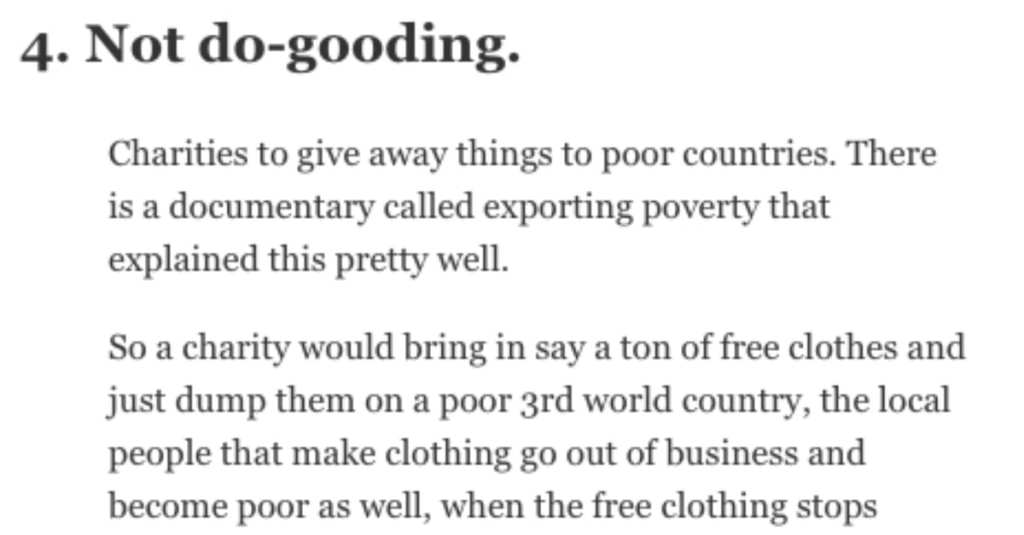 Being poor is like anything else in the wide range of human experience – if it’s not something your intimately familiar with in a firsthand sort of way, there’s a good chance you don’t understand what it’s really like to live that way.

When you know better, you do better, so it’s important to try to educate ourselves on what being poor is really like – and here are 15 ways you might be dismissing that experience and not even realize it.

15. The starting lines are not fair.

The emphasis on extracurriculars and internships in college and job applications.

Extracurriculars can be expensive, and teens who need to work to support themselves or their families are never going to be able to compete in that regard.

As someone who used to donate used school supplies “to Africa” when I was younger, this gives me something to pause and think about.

This also reminds me of the business model of the controversial WE Charity in Canada. Young people go to Africa to help build schools and supposedly make a difference, but it’s basically just optics and photo ops that takes jobs away from local tradespeople who know a lot more about building stuff than a 16-year-old high school student. It amounts to poverty tourism.

Rent to own stores. They prey on uneducated people with poor money management skills by convincing them it’s smart to take something home today and pay a fee every week plus interest for many months.

They are banking on the fact that people won’t realize they are often paying a lot more over time than they would if they saved the money by themselves and bought it outright somewhere else.

I had a friend who fell victim to them regularly even when I tried explaining it every time. It wasn’t odd for him to rent a TV, console, or laptop and end up paying $100 or more than the thing was worth brand new. There were even a few times he couldn’t keep up on the payments and had to return it, so they got to keep whatever he returned and all the money he had paid them up until then.

Charity is a death sentence for poor economies. Paul Vallely, who co-wrote “Is that It?” with Bob Geldof, wrote a book called “The Lords of Poverty”.

In it, he describes how aid workers become a parallel state, destroying local markets, healthcare, and education. In the worst scenarios, aid agencies are involved in rape, child sex abuse, sex trafficking, and drug smuggling.

Finally there’s the deliberate cruelty of religious foundations such as Mother Teresa’s convents, where the poor die of preventable disease, without palliative care.

Unpaid internships. I personally feel that if you’re making a profit you should be obligated to pay your interns.

99% Invisible’s episode ‘Missing the Bus’ pointed out that having only a bus pass or single fare transit system disadvantages poorer people, since they can’t pay the total price for the pass at the beginning of the month, but ride just as much or even more than people who can, paying the single fare each time.

They suggested a system that allows people to pay single fare, but if they reach a certain amount of trips in a month, rides become free, which is actually what my city did. I really hated having to continually load my transit card but now I see why it might be helpful.

AND they can arrange your account to charge you fees you don’t deserve.

Say you’re a student with $50 in your account. You make 3 consecutive purchases for $10 each. That leaves you with $20, but you still need to buy a $40 book for class that evening. You decide to swipe your debit card anyway under the assumption you’ll be charged a $35 overdraft fee just once.

Since most banks will process largest to smallest transaction the $40 book is deducted first leaving the student with $10 then the three $10 transactions are deducted. That would the bank to collect and overdraft fee two times instead of one.

It also impacts deposits, if you deposit money during that time but it’s small checks or small bills and not the largest value of the day, they can rearrange it to be at the end.

8. You either trust someone or you don’t.

It sounds really nice because why should the government give you food stamps if you aren’t willing to work, but the reality is that the threshold for receiving government benefits is so low that the only way for many people to survive is to not work.

For example: Let’s say you’re homeless. No fault of your own. You’re working a job you love that might lead to more opportunities but you make just a little over minimum wage, or maybe you even make minimum wage. Rental prices have been rapidly increasing and your landlord wants to get in on the action by remodeling.

He gets everyone out by not allowing people to resign leases. You look around for a new place to live but you’re priced out of everything. You try to get assistance with housing but no one actually cares until you’re literally sleeping on the street (not that they really care then, but…).

So you couldn’t get housing assistance before you became homeless and now that you are homeless you’re incredibly high risk for health problems. You can’t get healthcare through your job because it’s unaffordable. You apply for Medicaid. You make too much money for Medicaid. You apply for food stamps, thinking that maybe if you save money of food you can save up for a deposit on an apartment or pay for health insurance. You don’t qualify for food stamps.

You have a job. Full time. It doesn’t cover the necessities and no one will help you. So you quit your job (it was hard to hold onto anyway, seeing as you were sleeping on the ground and didn’t have access to a regular shower or a clean work clothes). Now you have healthcare and food stamps and someone is trying to help you find a place to live.

They want you to work. Any job will do you just have to work. You know the second you start working you don’t qualify for any help anymore. You tell them you only want a job that will pay enough that you’re able to survive. They tell you that’s not enough and you need to work. You get a low wage job, you get kicked off benefits, rinse, wash, repeat.

6. Any discount for paying up front, really.

UK – pay as you go gas and electric.

5. The welfare system is anti-poor.

It kills me when people absolutely jump on folks on social assistance programs. They’re “afraid of work” or “too lazy to work”. But that’s ridiculous. They’re making a decision that best serves their family, and I can’t fault them in the slightest.

I mean, come on, be honest:

Work minimum wage (because you don’t have the skills or experience to do better – and you can try to change that, but it’s not a quick or easy process). Make enough maybe for rent and basics, but you’re not able to save money, you can’t afford health insurance (state Medicare is inconsistent and many states only extend it to single mothers or very low income families with children). Very high risk.

Don’t work, and get state assistance instead. Now, you get subsidized rent, food assistance, and free healthcare.

You’re much better off – but if you make even a tiny bit too much, you lose everything.

Which would you choose?

Charities to give away things to poor countries. There is a documentary called exporting poverty that explained this pretty well.

So a charity would bring in say a ton of free clothes and just dump them on a poor 3rd world country, the local people that make clothing go out of business and become poor as well, when the free clothing stops coming in, the previous shops and jobs are gone.

Same goes for other things such as farm goods, especially live stock which takes years to raise an animal and make money on it. By “helping,” they’re flooding the local marketplace with free products it’s killing local businesses and worsening the overall poverty.

3. The system is stacked against you.

this is also a similar situation for disability benefits.

disability benefits prevent you from rejoining the workforce because anything you make at a job is taken out of your benefits.

like, let’s say your disability prevents you from working full time hours, but part time is fine. part time minimum wage won’t pay for shit, but, if you had disability benefits, it’d make it survivable and could work towards better managing your disability, finding a better job, and getting off benefits.

the whole system is designed to make you feel like shit for not working but punish you for wanting to.

Jobs that are totally full time, but only hire “contractors” to get a FTE without those pesky benefits. Sometimes they even charge equipment fees and stuff for things required to do the job. Harkens back to the company store days.

Ever travel through a dense urban area with a lot of “lower” middle-class, “working poor” and “regular” poor people? Pick a corner in that area and drive around until you find a grocery store. When, and IF, you find a REAL grocery store (not some bodega) try and figure out how easy it is to get to that store without a car.

Now do the same thing but replace “Grocery Store” with McDonald’s or Taco Bell or some other shitty fast food place.

This crap get’s even worse if you’re poor and live in the sticks. In fact, if you don’t have a vehicle your only options are move, or starve.

I’m definitely guilty of some of this, how about you?

If you have been or are currently poor, what are some other things people don’t realize? Share with us in the comments!