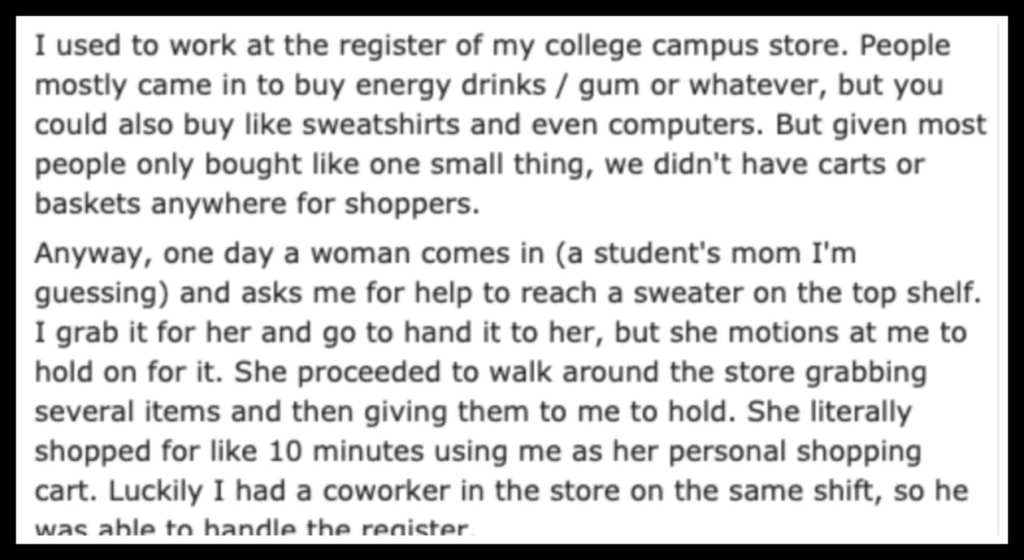 Service Workers Share the Times They Thought, “Is This Customers Literally Crazy?!”

Anyone who has spent any amount of time in a customer service job has dealt with our fair share of crazy people, annoying people, demanding people, demeaning people, you name it.

Which just means that you have to be super insane to be the one case that comes to mind when someone asks you to answer this question on Reddit.

15. A please goes a long way if you’re really unable to do it yourself.

I had a volunteer come up to me at the public library I worked at and demand that I tie her shoelace.

14. This is definitely a touchy subject, but still.

When a customer accused me of making her come back for her prescription refills every month when we were restricted to fill one month of medications at a time, no exceptions.

The government made everyone aware of the restrictions and people still got upset, but that took the cake.

I was 5 minutes early to service her home for pests, she yelled at me for 2 minutes about how inconsiderate I was and then told me to wait in my truck.

Her husband then pulled up and asked what I was doing and invited me in, she then continued to yell at me about how I shouldn’t have come in because she said to wait until the appointed time.

Her husband apologized and told me to just leave and gave me 20$ cash. I called my boss and explained the whole situation and we blocked all her account information.

My sisters mother-in-law opened up all her wedding gifts and packed them away while she was on honeymoon!

It’s been 3 years since but I’m still mad thinking about it!

A couple of years ago, around Christmas time, a woman comes in and complains about the string of lights not working properly. She says she’ll grab a different one and come back. Comes back 30 or minutes later and starts telling me how there were only two packages left. Then she looks me dead in the eyes and says “What I’d really like you to do is give me this one for free.”

I chuckled and said “we’re (target) not in the business of giving items away for free. The most I can do is 10% off for an imperfect package.” Needless to say she returned both items.

10. I can’t think of anywhere this would happen.

Someone asked if I could break a $100 bill in pennies. I just looked at her, looked around to make sure I was definitely not currently working in a bank (it was a bakery), and said sorry.

9. This could have ended so badly.

“I didn’t leave him in the car that long, plus the windows were cracked!”

My mother in law, the last time she was ever allowed to watch my oldest child. He was two and it was 90°F.

I was heavily pregnant and had to sit on my hands the next time I saw her because I wanted to cave in the Italian leather handbag she calls a face.

On multiple occasions I’ve had mothers try to leave their kids with me because I’m in childcare. I literally have to stop telling moms I’m a nanny because I end up getting a strange baby plopped in my lap.

The worst was at a park, I was chilling and reading. A mother sits next to me on the bench with her baby. We start chatting a little, “oh you’re baby is such a cutie!” stuff like that.

I used to work at the register of my college campus store. One day a woman comes in and asks me for help to reach a sweater on the top shelf. I grab it for her and go to hand it to her, but she motions at me to hold on for it. She proceeded to walk around the store grabbing several items and then giving them to me to hold!

She literally shopped for like 10 minutes using me as her personal shopping cart. Luckily I had a coworker in the store on the same shift, so he was able to handle the register.

At the end of this whole ridiculous segment, she got a message on her phone, read it and said “oh you know what I actually have to go meet my son. I’ll come back later to get the things I need.”

And then she left, and I was left standing there with an armful of random   that I then needed to go put back one by one. Like cmon woman.

6. Some people are just begging to be confronted.

The time this mother yelled at me for saying excuse me. Her and her family were taking up an entire bike path (including the shoulder). Instead of cutting through them,

I moved onto the shoulder and cheerily excused myself as I passed her. Didn’t touch her and she didn’t really have to move since I managed to squeak by. Yet as I passed, she started screaming a bunch of s**t. Well, she did not expect me to come to a screeching halt and ask if there was an issue. She promptly hid behind her husband and wouldn’t even look at me.

All that energy for what 🤡

I have worked at Spirit Halloween every season for the past 5 years (I would highly recommend if you’re trying to make some spare cash). Anyway, super shady things happen at Spirit Halloween all the time, so I have endless stories to tell. For this story, I was working the dressing room. Basically just regulating who goes in and taking costumes out of the bags to withhold accessories (to prevent theft), etc.

This was my first year working there, so I was about 20. Just a couple days before Halloween, a girl around my age came to the dressing room with a typical college girl costume, that’s all I’ll say. She says something like “oh good. We’re about the same size! I’m in a rush so I wouldn’t have time to find an associate to help me.” I just kinda smiled and took the bag from her, like what the hell does that even mean? I unpack the costume, leave the accessories, and put it in a basket to carry to the dressing room. She looked really confused, so I just asked her to follow me and I’d get her a dressing room.

I wish I was making this s**t up, but this girl says to me, “why would I go back there for you to change?” HUH???? I can’t even remember exactly how I responded because I was so confused, but it was something along the lines of “you try on the costume yourself so you know how it fits you, an associate doesn’t do it for you.” And this girl had the audacity to be MAD AT ME for saying that! Her response was basically “well, I don’t want to have to get out of my clothes and change into the costume, so it isn’t worth my time. That’s so unsanitary to have a bunch of people trying the costume on instead of you just doing it, so I don’t even want it anymore” followed by her storming out.

Coworker gave me the whole “we’re all in this corona thing together and have to sacrifice together” speech, then called a departmental meeting (excluding me) to bully our supervisor into making sure that 100% of lost hours and lost income from scheduling changes and cuts fall on my shoulders while all of her and her friends’ paychecks remained completely intact because “he’s just a part timer, we’re the real team here and not him, technically he’s not entitled to any hours at all so it’s okay to cut them all”.

My income for the month dropped over 50% while the “real team” that I’ve been a part of for five years didn’t lose a dime.

2. This girl definitely grew up to be a Karen.

This one girl in my class loved to apply perfume whenever she could despite the fact that the girl sitting next to her was very sensitive to fragrance. One day she sprayed a whole bunch on and the girl started having a coughing fit and then a migraine and was sent to the nurses office to calm down. When the teacher asked the girl why she did that all she said was “what’s the big deal? it’s not my fault”

1. No one is going to give you want you want, lady.

Happened a few days ago.

Customer hasn’t paid their bill in 5 months, and was in bad standing even before Coronavirus. We actually agreed to waive her late payment feels of three months.

Bitch then has the audacity to DEMAND that we remove 75% of her bill then demanded to speak to the CEO when we obviously refused.

As a former waitress and a former usher at a major league baseball stadium, all I can say is that none of this surprises me.

If you’ve got a story that could rival any of these, make sure to drop it in the comments!