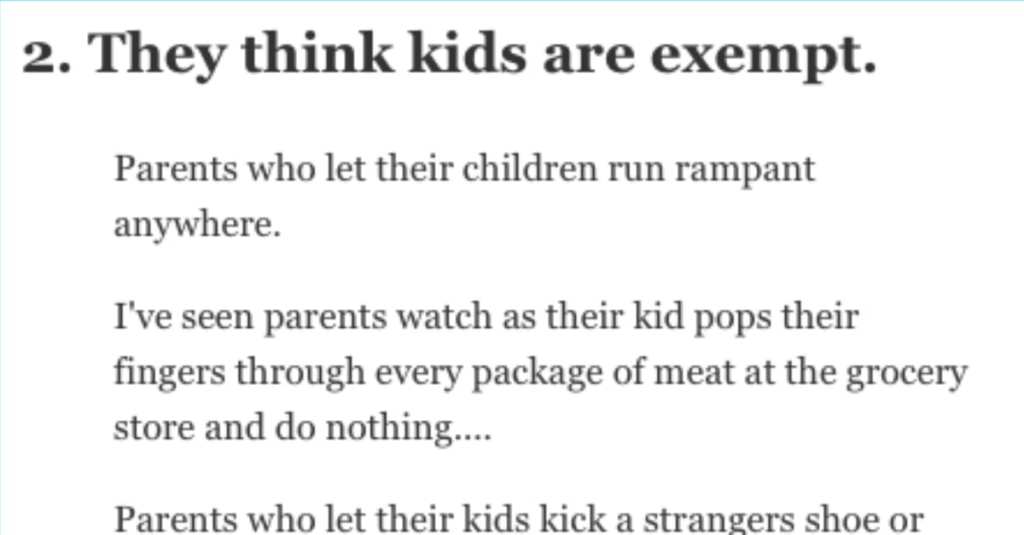 16 Actions People Say Prove a Person Has No Manners

Some people may think that manners are antiquated or overrated, but as someone raised in the Midwest, I can promise you that for more of us, that’s simply not true.

The thing is, we live in a society, and we’re all better off if there’s some kind of bar as far as how to act when we’re in a group setting, don’t you think?

If you’re worried about your manners, or those of your kids, here are 16 things people say are a dead giveaway that yours are lacking.

I used to work in a toy shop and people thought it was okay to just leave their kids to run around while they went shopping.

We had to call security so many times to find the parents because they just wouldn’t understand our shop was not a play area.

15. Just be aware of your surroundings.

Standing in the middle of the aisle at a grocery store.

Not returning the cart.

13. The movie is not a babysitter.

People who let their kids run around in a movie theater, kick the back of your seat repeatedly, and hang on you.

12. Clean up after yourself.

People who leave their litter and uneaten food all over fast food restaurant tables, and the floor area.

Coughing or sneezing without covering your mouth.

10. I do not understand why people do this.

When they walk into an elevator before you have a chance to get off.

9. We all know about please and thank you, right?

When you offer your time and money to drive someone and they don’t thank you for the ride.

8. That’s a quick way to decide you don’t need him as a friend.

Hung out with a co-worker once and he threw all his garbage out the window of his car onto the street.

Never hung out with him again.

7. It’s like he thinks he lives with a maid?

So i have a roommate who i’m entirely convinced has absolutely no manners whatsoever.

For context, i live in the barracks, so i have no choice but to live with this guy. I have a million and a half stories about this guy, but i guess i’ll start with the basics. doesn’t clean up after himself, and refuses to help clean – even if he’s a guest in someone else’s home. Chain smokes/vapes in peoples cars, flicks ash “out the window” but everyone knows that literally will just kick it back into the jeep.

Tries to constantly “teach” people things, and will talk your ear off and basically just dominate the conversation. No listening or allowing for a different perspective. Motherf**ker literally introduced himself to me as “the smartest man in any room”

He plays music and sings in the shower at 4, 5, 6 in the morning and will take 45+ minute showers – 20 minutes to sit on the toilet and 25 to have his concert. The last straw for me was when i came home on leave and saw his flesh light sitting out in the common area table.

We’ve stopped inviting him to places. He sits in his room alone playing xbox all day because i’m not responsible for teaching a 21 year old child basic manners. it’s not happening.

6. Wait, people really do this?

When you’re having a nice chat with someone and they start saying things that don’t seem to make sense to you….then you realize they just answered a call on their @#$% bluetooth phone ear thingy and are not even talking to you any more.

Inviting everyone in the friend group to an event and excluding just one friend then proceeding to talk about how much fun they’re going to have at said event in front of the person that was purposely excluded , in front of everybody.

Happened today and thought it was pretty rude.

Apartment neighbors who slam their doors as hard as they can.

3. Everyone needs to teach their kids this.

When I was a kid in the 80’s, I was driving with a neighbor and I chucked a piece of trash out the window.

She immediately pulled over and made me get out and pick it up. Lesson learned.

2. They think kids are exempt.

I’ve seen parents watch as their kid pops their fingers through every package of meat at the grocery store and do nothing….

Letting the kids spit on windows and rub it with their hands.

Letting them run around the store, playing with anything and everything and leaving a mess for others to clean and the parents literally just ignore it!!!

I never understood that. They really are your obligation, not the store associate who’s unlucky enough to be working the shift you happen to stroll in during.

Be a parent!!! Bad kids can turn into crappy people

1. Just use your turn signals – that’s what they’re there for!

I can’t even fully understand why this makes me so angry. I am a generally calm person. I’m not hot-headed at all. But when someone doesn’t use a turn signal my blood boils so fast it’s insane!

I think in my mind I assume “if you can’t operate the most basic function of your vehicle mandated by the law – then you have no business driving at all”.

I don’t do any of these – props to my mom and dad!

Is there anything you would add to this list? Tell us what and why in the comments!