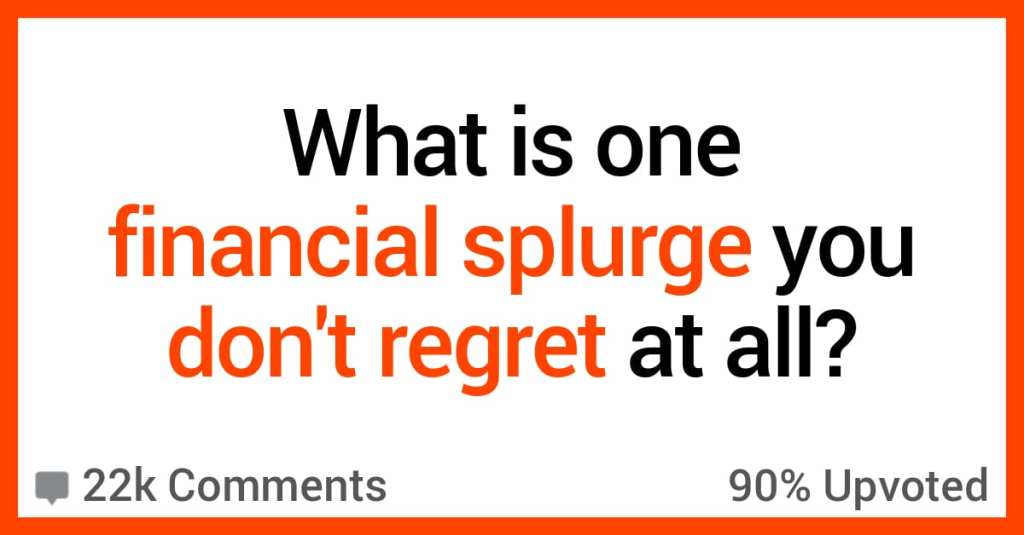 Some people spend money like it’s burning a hole in their pocket, whether they have to to spare or not. Other people pinch every penny, working themselves into a tizzy of anxiety before a large purchase of any kind.

No matter which sort of human you are – or if you fall somewhere in between – there are times we spend a good chunk of change and end up regretting it in the end.

These 16 purchases didn’t end up that way, though – because whether they could technically afford them or not, they never regretted them at all.

The summer after graduating high school, I won a decent amount of money playing online poker.

Since I wasn’t going off to college and all of my friends were, I decided to buy them all ridiculous going away gifts. A carpet, mailbox, toilet seat etc. were among the gifts.

The most expensive and ridiculous gift I bought on a whim was a massive wheel of cheese, somewhere between $200-300. Little did I know at the time, that cheese wheel would set off a yearly event called “Cheesegiving” where our entire (much larger now with spouses and kids) friend group gets together to celebrate and partake in cheesy goodness.

This year was our 17th (unfortunately all virtual due to covid) and I genuinely hope it never ends!

About $800 in 1987 but I still listen to them and they are unbelievably good.

I got $27k, and spent it on a solo cross country road trip that led to me moving on the complete opposite side of the country from everyone I’ve ever known.

I was in a dark place in my head, the original plan was to find a nice place to end my story, but the trip itself helped me reconsider, so absolutely no regrets to speak of.

The extra I pay in rent for a water view

When my mom was diagnosed with cancer (a year after my dad died unexpectedly…from cancer) I went to the animal aid thrift shop, bought a bunch of odd dishes, put down a drop cloth, and threw them at my house while screaming bloody murder.

I don’t regret one second of that temper tantrum or one dime I spent to make it happen. I eventually made a couple of beautiful mosaics out of the pieces.

And my mom is 6 months cancer free.

Dining at a Michelin starred restaurant in Milan. We had an 18 course meal with wine pairings for like $400 or so.

I  used to scoff at spending that sort of money on meals, got convinced to try it one time, and loved it. Now, every couple years we try to find something big like that to do. It really is amazing what top tier chefs can do to food.

Travel. I’ve never regretted spending money on travel. Those are some of my favorite memories.

I can’t wait to be able to travel again.

9. If cars and racing are your thing.

600€ for an hour of laps (three of 20 minutes each) around the Nurburgring in Germany. It was open in the off-season and there wasn’t a single other car near me the whole time.

10/10 one of the most thrilling experiences of my life.

Edit: I rented a car at the track which is why it was so much. You can bring your own car or rent one there, but they don’t allow commercial rental cars. Individual laps were I think 20€ each at the time.

8. For the special occasions.

I bought my own tuxedo.

I also spent $20 on a mustard yellow hat that has “BIG CHEESE” written in red stitching on it. Only bust it out for the really big occasions.

7. The power of a good shower.

Due to poor insulation and distance from the water heater, my shower is never properly warm in winter. I just bought a single end-point tankless water heater for just my shower.

Best hundred and fifty bucks I ever spent. Could I really afford it? No. Did I need it? No. Do I love it? You bet your sweet bippy I do!

6. But you’ll have it forever!

Exactly one year ago I got my private pilot license. So much money went into to it, and now it costs a lot of money to keep it (by flying). I don’t regret it at all, very cool feeling to go flying!

5. The gift that keeps on giving.

Back in 2017 my family went on a road trip to Minnesota to visit my nana shortly before she passed. During our stay me and my little sister went to the Mall of America and bought whatever the f*ck we wanted.

Big ice cream cones? Lego store souvenirs? Tickets to the aquarium? Fare for every indoor amusement park ride? A doll from the American Girl Store and eating an expensive lunch in the Store with your new doll sitting at the table with us?

F*ck yeah little sis it’s all yours. I dropped over $300 in that one mall trip but damn was it was one of our best shopping days ever, we still talk about it to this day.

It’s worth every penny! I have long hair down to my waist. It only takes me about 3 minutes to dry it.

There is a perfectly good street outside I could run on, or I could pay for a gym membership for years and years.

BUT now I can get a run in during my daughter’s nap time, or when it’s cold, or when I only have 30 minutes free and driving to and from the gym would eat up half of my time.

I certainly could have made it work without this expense, but I really love it.

2. A blessing in disguise.

Back in high school I was about to go on my first ever date and I made extra money to make sure I had enough (around $600 I had) the day before our date she gave me a letter and she basically broke up with me.

Being a teenager I had no control over my emotions as being brought up in my family would say guys shouldn’t cry over anything but I had no way to process it. So after school I went to 7 eleven bought 2 large slurpees, 6 hotdogs and got a pre paid card and bought a bunch of NECA action figures.

When I was younger I came into a sum of about $15k. I wasn’t very careful with the money and other than putting $5k down on car, I blew the money here and there.

But what I put the largest amounts toward were friends in need. I paid one friend’s power bill just before it got shut off. I helped another friend keep her water on.

I never could keep my hands on money for long but I don’t regret having “wasted” it helping friends.

I’m making a list for myself, how about you?

If you’ve got something else you would add for my consideration, please drop it in the comments!