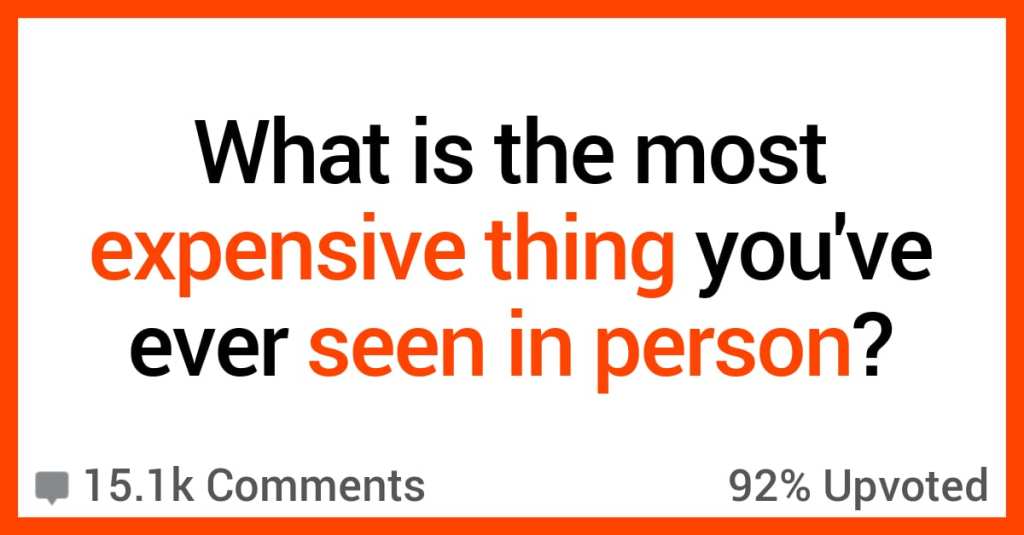 If you’re not someone who has access to copious amounts of money, you probably remember the times in your life when you’ve been in the room with something you could never really afford.

Whether it’s a huge house, a fancy car, someone’s outrageous piece of jewelry, or even a really pricey bottle of booze, those moments are burned in our brains.

If you have money, of course, it’s just like any other day – but for these 21 people, they’ll never forget the moments they saw these extremely pricey items.

Outside of the Crown Jewels and art museums, I went to Harrod’s and saw a chandelier worth £50,000.

To be clear, yes, of course I’ve seen more expensive items, hence the Crown Jewels. This wasn’t a grand hall chandelier. This was something you could hang over a standard dining room table.

The set designs for fashion shows. When I was working as a scenic carpenter I was always amazed at the amount of money spent on scenery that will go right into the trash for events that last 30 minutes to a couple of hours.

We covered an empty warehouse floor in Manhattan with something like 50,000 square feet of beveled oak boards in one instance. Material costs aside, we had a crew of around 20 guys making at minimum $25/hr working for days around the clock to make it happen.

A freshly drafted NFL rookie stayed at a hotel I worked at and partied a little too hard. When checking out he left over 100K in jewelry in the room. I was tasked with going and getting it and securing it till someone from his posse could come get it. I wore it for a few hours for fun.

Heavy AF and so f**kin shiny. A bracelet that was wider than the biggest watch covered in diamonds, and a chain that went past my sternum and probably 1/2in in thickness also completely encrusted in diamonds.

18. Holy buckets. No one was expecting that.

Years ago, I apprenticed as a luthier. The shop I worked in was almost entirely guitar repair, and one day a woman came in with a violin. She said it was her grandfather’s (or maybe great grandfather’s? I can’t recall), and he had played in the Detroit symphony.

It was obvious that the fingerboard had been replaced at some point, and the instrument was really old. Like, REALLY old. My boss knew a guy who specialized in violins, so he drove a couple hours to have him take a look at it.

The guy told him to get it out of our shop immediately and send them to a specialist in Chicago. He said it was early to mid 1700’s, and was an exceptional instrument. Everyone has heard of Stradivarius violins, but not many people have heard of Guarneri, his rival. Apparently, there are still a few “lost” Guarneri violins out there, and this guy thought that this was one of them.

My boss trusted this guy, and I trusted my boss (he has toured as the personal guitar tech for the like of Kenny Rogers, Big & Rich, Robert Randolph, etc.), so we called this lady up, told her where to go, and gave it back to her. We didn’t want to get her hopes up too high just in case the guy was wrong, and I think she decided not to look into it further (I was under the impression that a trip to Chicago was not financially feasible)

I guess it’s not entirely outrageous but I went to a family owned aquarium store a couple months ago to get some medicine for my guppies and they were selling 1 year old arowana fish for $6000 each.

I’m probably just ignorant when it comes to prices of exotic fish but I was quite surprised considering they were surrounded by guppies and goldfish who’s lives are worth approximately $2.50 each.

A bottle of whisky that was $50k. If you purchased it, it had to be delivered via armored vehicle for insurance purposes. Seems a bit over the top, but I’m more of a $20 dollar bottle of whisky kind of guy. My budget and wife have made this very clear.

In Aspen, CO a few years back in a small antique store.

We walk in and the guy working there never even acknowledges us while he’s casually chatting on his phone.

I see a carved wood eagle sculpture about two feet tall and one foot wide. I flip over the price tag $125,000.

I laughed out loud, looked at my friend and said “this isn’t our kind of store” and promptly left.

Aspen is the weirdest place I’ve ever visited.

The Patek Philippe Grandmaster Chime in steel at an “Only watch” showing in London.

All the big watch companies do a one-off for the charity auction, and Patek usually only do watches in precious metals.

A grand complication in steel is truly a one-off. It sold for 31 million Swiss Francs (close to 35M USD).

I actually held it in my (gloved) hand.

Used to run the warehouse at a tech company, one day the CEO himself comes into my office. He’d bought a bathtub carved from one huge piece of quartz that the company wouldn’t deliver to Aspen where he had a vacation home being built, so he had it shipped to our warehouse to wait on being shipped up there.

The thing was about 2500 pounds and cost $22 million. He was talking about how it was this huge ordeal because he had to wait on renting a crane to lift the thing onto the second floor while the house was still under construction, which cost another several thousand, and how hard it was to time all this to get up there at the same time.

The entire time I was thinking “you realize how little you pay me right? I can’t afford my own apartment and you’ve spent half an hour of my time that I have to make up moaning about how difficult your life is making 8 figures.” Wealthy people have an entirely separate reality they get to live in.

12. I would have just stared at it all night.

The CEO of my husbands company years back held a christmas party at this house (at the time, the company was a start up and there was maybe 20 employees). He had original Picasso art work on his walls.

I have no idea how much they were actually worth, but I thought that was pretty cool.

I used to work for a billionaire. They loved to purchase very old wines (think 90+ years old), random jewelry for their spouse, a solid gold sturgeon caviar holder, $1M+ cars, etc. Generally all through auction at Sotheby’s. It was my job to organize their purchases.

It was… Interesting, to see what crazy things rich people spent their money on. I may or may not have tried on the jewelry.

10. I would have been afraid to touch them.

My high school orchestra teacher (who is also concert master for the Arkansas Symphony) was loaned a $12 million Stradivarius anonymously for an upcoming performance.

I wasn’t allowed to touch it, but I got a solid look at it, as well as heard it from three feet away.

9. I would never have sold that.

A comic book shop called silver snail used to have Amazing Spider-Man #1 on display and for sale.

8. Being nice was the real accomplishment.

We later found out that his ’14 year old cousin’ was actually his 28 year old body guard, and he was the son of a Russian diplomat.

All around nice kid, though!

I attended a wedding that was rumored to cost well over a million dollars.

There was two venues, if I remember there was 9+ member band flown in from NYC, another strings band during the ceremony, and a 3rd trumpet band that escorted the walk to the reception. An artist oil painted the reception live at the party.

The food was incredible. Each table was over the top with guests having their own glass engraved with their name to take home. They gave people dancing shoes you could take home.

It was incredible and probably the most expensive private event I will ever attend. I’m sure I’m missing some other details but everything was over the top.

My sister used to work on super yachts. I’d go visit her every now and again and stay on the boat during off season (in crew quarters).

This was about half a billion euros worth of boat.

And it was pretty damn fancy.

It had glass flooring and staircases, that turned opaque if you stood on them so people couldn’t look up your skirt, all the usual fancy boat s**t like a spa and gym and movies that hadn’t even been released at the cinema yet.

5. He must have looked like a Target bicycle guy.

$10k-20k bicycles. I must’ve looked poor, because the guy running the place pretty much kicked me out as soon as I walked in

4. It would be worth like a billion dollars in LA.

A 2.5 million dollar mansion in Missouri. My roommate and I played dress up and went to the showing for the free food.

When we asked about the entire first story being stone, including the furniture, we were told it was because the river overflowed and flooded the mansion every year.

Everything was made of stone so it could be cleaned easily.

3. This is so hard to believe.

I worked security at an Art Museum and we exhibited this little Chinese tea cup with a rooster on it.

Little ass thing was worth over 36 million dollars. Apparently there were only four in the whole world.

I felt unsafe around it like I’m not risking my life for this stupid cup.

I went to a party at a pool house when I was a teenager just the pool house was 4,000 sq ft.

A wealthy couple had a pair of Steinway concert grand Model “D” pianos at opposite ends of their spacious living room.

Neither the husband nor his wife played.

The pianos, valued at about $175,000 each, were just there “for show” and when they hired someone like me to play piano for an occasional cocktail/dinner party.

I guess I have never been in the room with anything super expensive, because I don’t know how I would answer this question!

If you do, please, tell us about it in the comments.