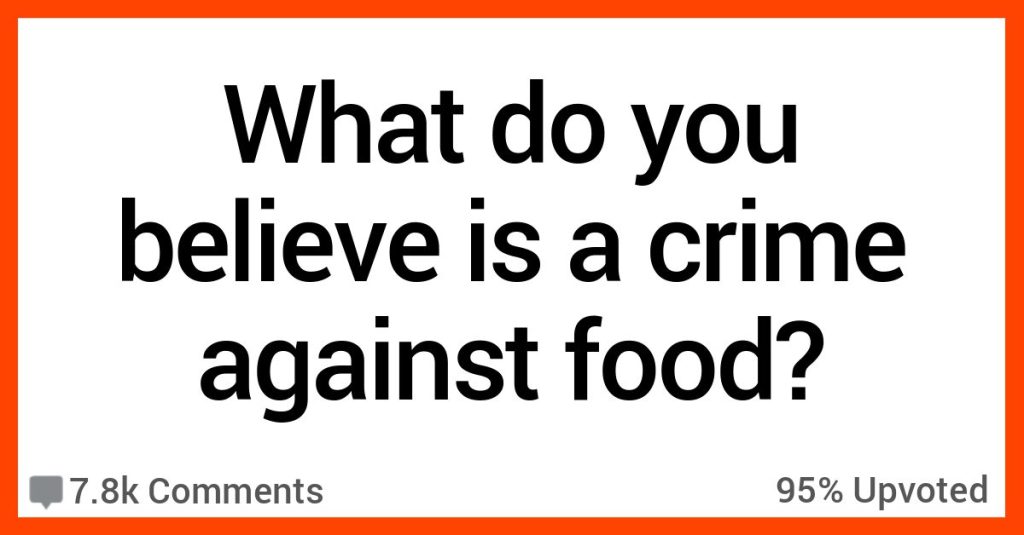 If you’re someone who loves food, who considers themselves to be a decent cook and/or baker, and who looks forward to the eating portion of every day, then there are likely at least a few food-related offenses that you take personally.

These 16 foodies definitely do, and I’ve gotta say that after reading through this list, I think we’re all going to have a to add a few more “never please” items to our no-no lists.

Waldorf Salad, lime jello with shredded carrots in it. Any church lady food with f**king raisins.

I like to make lime jello with shredded carrots and take that to a church potluck. Then I put another family’s name on the dish (like on masking tape to make it look like they don’t want to lose their dish).

EDIT: for Americans, I’m not referring to tomato-based pasta sauces, but ketchup/catsup. It dries out easily and gets naaasty

Using a doughnut as a burger bun.

Good God people, I know obesity is like a national sport here, but just… Come on.

I tried this and felt like the beef flavor was so overpowering I barely tasted the doughnut anyway, so I added hundreds of calories to my meal for nothing.

When restaurants pour bleach in food they are throwing away to prevent people from eating it.

Most diet stuff like 0 fat anything or like light sour cream that stuff is nasty. just eat unhealthy food less often don’t make nasty versions of it.

I accidentally purchased some “lite” cream cheese. Didn’t realize it until I went to spread it on a bagel. The texture was waxy and bizarre.

The calorie count of the lite version wasn’t much less than the good stuff.

Wasted food. Food that requires excessive animal cruelty in production. Food with gold in it, it has no flavor you preening bell ends.

I put Tabasco sauce on almost everything I eat (eggs, scalloped potatoes, macaroni and cheese) and I’ve been told that it is a crime against food. But if that’s true, why does it taste so good?

Tabasco and eggs is the bomb love it so much.

Now I have tried Sriracha on pepperoni pizza too and that is awesome as well.

8. All tomato sauce is not created equal.

Also my ex wife would put mayo on her pasta. Mix it right into the marinara. Made me want to puke.

One of many reasons I’m glad to be rid of her.

My in-laws got a nice prime rib from Costco, and did something I would consider even worse than making it well done.

They cubed it, stuck it in an instapot, and made Beef Bourguignon with it, using no salt or spices. They then stuck it over homemade spätzle, also with no seasoning.

They went on talking about how amazing it was, while I sat there trying to swallow flavorless mush.

The British colonizing the world to find spices and not using any in their cuisine.

British cooking has used a lot of spices for centuries, but the impression most people have of British food stems from WW2 rationing. The people who grew up on those diets in the 40s and 50s and had no idea how to use flavourings which they had never had access to, and their lack of use informed their offspring’s tastes and cooking habits.

Certainly since the 90s this has changed massively. There are bland foods, but also highly flavoured foods, just like anywhere else, and the density of global cuisines available is one of the very best in the world.

5. That baby died for nothing.

Went out with eat with one of my buddies. He gets the lamb chops, asks for A1 sauce, and with out taking a single bite, pours the sauce all over the lamb…

4. It’s the water thing that gets me.

Hotdog eating contests. I hate everything about them and if I could make them illegal, I would.

They’re an affront to the dignity and decency of all involved, and reflect poorly on all of us as a nation.

I am guilty of this crime against food. I wanted Grilled Cheese and Spaghetti-Os, but also had some Mexican Street Corn in the fridge, so I combined the two. It was actually really good.

When people say that Subway or Jimmy John’s is a “deli.”

I mean at least at Jimmy John’s the meat, cheese and veggies are sliced fresh in store, not the same as an actual deli by a long shot though.

Biting into a Kit Kat without separating the bars.

I have no idea why anyone would think some of these are an acceptable idea.

What’s the worst food crime you’ve ever witnessed? We want to hear about it in the comments!