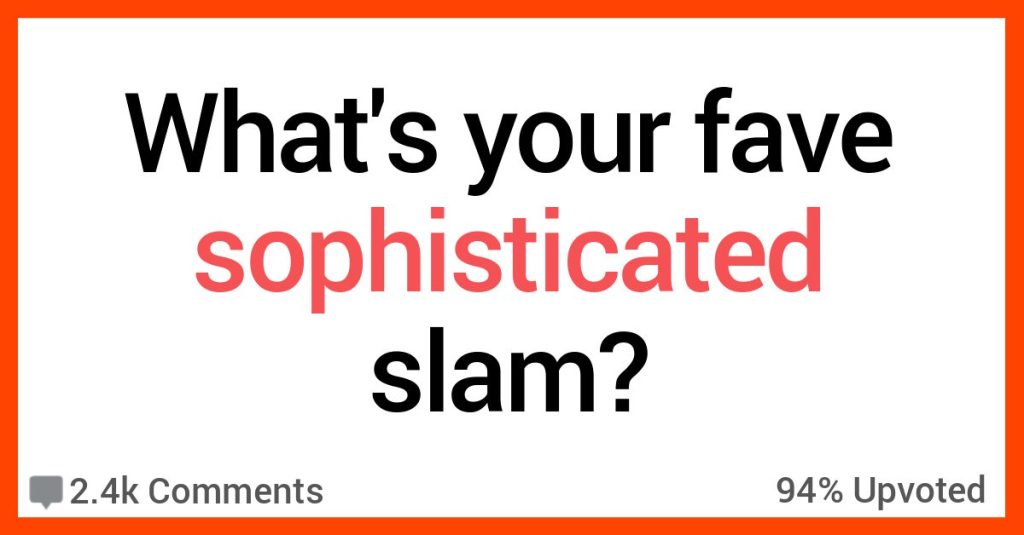 In polite society, we can’t always come out and say exactly what we want to the people around us. We might need to work with them in the future, their kids might be friends with our kids, they might be part of our family or our church…but nonetheless, it can be hard to totally hold our tongues.

If you’re looking for a “nice” way to tell someone to go piss up a rope, these 18 people just might have you covered.

There are countless examples of this in history from some very famous people.

A few of my favorites are

Bessie Brad­dock MP: “Win­ston, you are drunk, and what’s more you are dis­gust­ing­ly drunk.”

Winston Churchill on Ramsay McDonald “We know that he has, more than any other man, the gift of compressing the largest amount of words into the smallest amount of thought.“

Count Telleyrand “In order to avoid being called a flirt, she always yielded readily”

George Bernard Shaw to Churchill “I am enclosing two tickets to the first night of my new play; bring a friend… if you have one.”

Churchill in response “Cannot possibly attend first night; will attend second… if there is one.”

I envy the people that do not know you.

Madam, you have between your legs an instrument capable of giving pleasure to thousands and all you can do is scratch it.

He was talking about a Cellist.

I have a cup that says that. It says Good morning.

I see the assassins have failed.

Old Azerbaijan leader once sent the Ottoman sultan a box of human waste. Ottoman sultan then sent back some Turkish delight with a note saying “Everybody sends what they eat to their neighbors”

When questions about Jared Kushner’s admission to Harvard surfaced (after his dad made a million dollar contribution to the university), one of his high school teachers, asked about the likelihood of Kushner making it on his own academic merits, said, “Jared is untroubled by complex thoughts.”

Whats that line from Mallrats?

“You got something to say?!”

“About s million things, but I don’t think I can say them monosyllabically enough for you to understand them.”

You are not the brightest bulb but you are the sharpest.

Gets em every time.

You should carry around a potted plant and apologize to it constantly for wasting the oxygen it produces.

This sounds like one of those funny drill instructor quips, like “Go around base and apologize to every tree for wasting the oxygen they’ve worked so hard to make!”

“I have been called worse by better people!”

I have neither the time nor the crayons to explain this to you.

I work in construction and I have a client that doesn’t read schedules well.

He asked us to colour a drawing so he can understand what we are currently working on.

I always joke about using crayons for this drawing!

7. I thought it was to give us something to read while the conditioner works.

“You know you’re the reason why shampoos have instructions right?”

You couldn’t pour water out of a boot, even if the instructions were on the heel.

I heard an alternative one: “You couldn’t find your a$$ even if the instructions were in your back pocket”

5. This friends thing is not for me.

I do desire we may become better strangers.

I’ve had to come up with a good polite insult in the age of COVID.

Mine is, “You’re really holding down your end of the Bell Curve, aren’t you?”

It’s implying that that’s the best he could say about then.

Instead of calling them an idiot tell them

“There must be a village missing you somewhere”

My boss is the most ladylike woman, she’s the most graceful person you’ll ever see and she never swears, she’s very soft spoken. The kindest boss ever. When someone powerful pisses her off, though, she’s the queen of sophisticated insults.

She very politely told one of the worst oligarchs that he had her condolences for missing a backbone.

Another time she sweetly apologized that she hadn’t noticed that he is a man, because she thought humans should have humanity. And her most recent I-hate-you-and-I-don’t-give-a-f**k-who-you-are moment was when she spoke to a government official deciding on a very important issue for her.

I don’t know what exactly the problem was, I think the man wanted bribes, or something. But she congratulated him on holding a record in lowering the expectations long after they fell to zero.

Well, I think I’ve definitely got a few more insults for the bank, how about you?

Tell us in the comments which ones you’re definitely going to try!