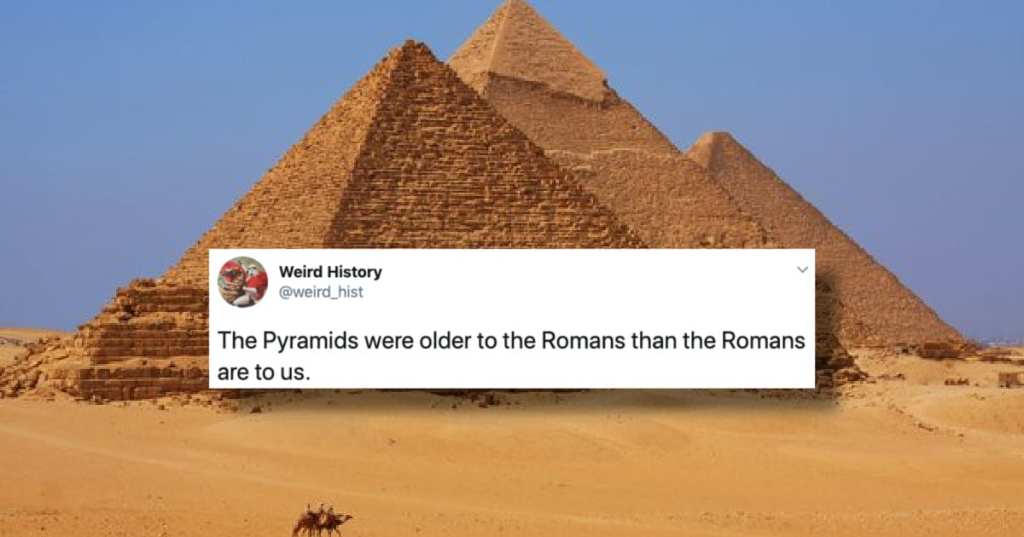 Okay, not really, because it seems like they never teach you the good history in class. If they did, everyone would love it. Universities would be overrun with history majors, and listen – I don’t think that would be a bad thing, because too many people are out there living like the past doesn’t come back around to haunt us all over again.

This account on Twitter is sharing all of the best parts of the past, and I don’t know about you, but I am totally here for it.

16. If someone deployed chickens against me, they would win.

US soldiers in Iraq deployed live chickens to warn against chemical attacks, in an operation known as Kuwaiti Field Chicken (KFC). pic.twitter.com/7riGZQywdI

15. This would get them plenty of hate mail these days.

I guess it worked, though.

According to Herodotus, in the battle of Pelusium (525 BCE), the Persians used cats as shields because Egyptians were forbidden to kill cats. pic.twitter.com/O5HKG5mCDK

Dry it out and voila!

Money can survive a long time underwater. This stuff is over a hundred years old from the Titanic. pic.twitter.com/PET2R0hhvp

You know, once that’s allowed.

Highest literacy country: Georgia. They also master weightlifting, perhaps from carrying all those books around. pic.twitter.com/5EMPCk51bM

Imagine someone saying that to you for the first time.

The Italian version of "break a leg" for good luck is "in culo alla balena!" which means "in the whale's ass!".

Best friends Lydia Litvyak and Yekaterina Budanova were the top female aces of WW2. Together, they shot down 23 German aircraft. Both were killed in action. pic.twitter.com/nAUQPYyg6p

10. What’s normal depends on your perspective.

Countries where you become a citizen by just being born there. pic.twitter.com/hEiYYNeBJW

Why were there so many rules?

To circumvent export restrictions early in WW2, FDR would have military supplies "left" near the border, where they were picked up by passing horse teams from Canada. pic.twitter.com/qlR2mLhyiY

According to the official account, Rasputin (left) died of drowning after failing to be killed by poison or multiple point-blank gunshots. pic.twitter.com/oOUTwiPTTj

7. What was WRONG with Medieval humans?

I mean, we’re not all sunshine these days, but still.

6. The French are so delightfully quirky.

That, and their pastries, are why we put up with them.

The heir to the French throne was called "dolphin" because the coat of arms featured a (happy, fishlike) dolphin. pic.twitter.com/0CUv6SiXTY

5. Yeah, that was unfortunate.

Texting sure would have come in handy back then.

The Battle of New Orleans took place after the War of 1812 had already ended. pic.twitter.com/1aDaq59i2E

Which is to say, accurate.

German commander when asked if he understood his "not one step back, fight to the last man" orders on the Eastern Front: "Understand? Words yes. Sense no."

I kind of wish they would expand their Empire now.

The Swedish Empire at its height, 1685 (unless you count IKEA). pic.twitter.com/iuZXvjhCLa

We are so young still.

The Pyramids were older to the Romans than the Romans are to us. pic.twitter.com/AwjY9jLDWT

1. Proof that humans have always been lazy.

We didn’t embrace cereal until it was ready to eat.

The first breakfast cereal was advertised as "Ready to Eat", but it never caught on because it required soaking overnight to soften. pic.twitter.com/HdLEX82rFs

Some of these are new facts to me, too, and they are definitely super fun.