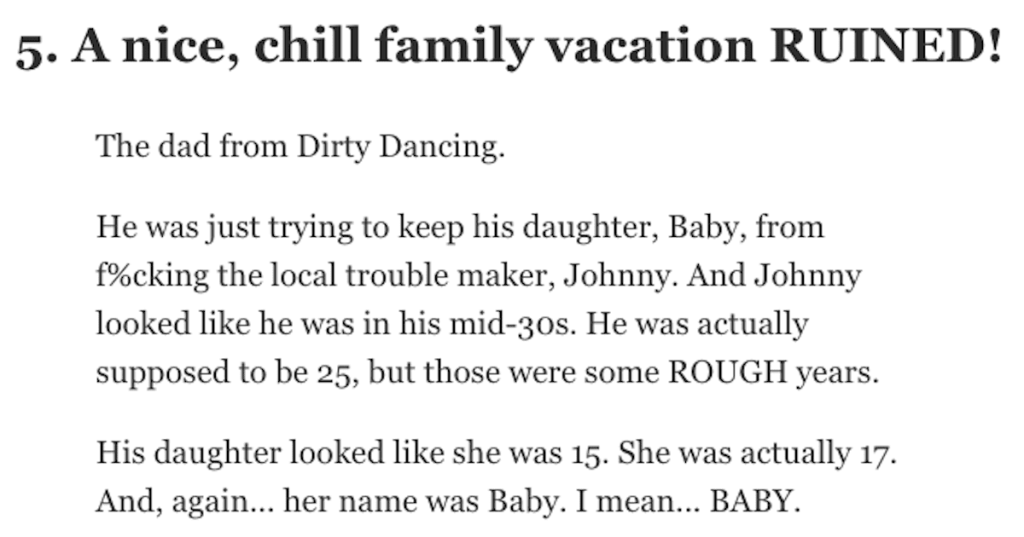 The best villains are people you can see their point of view, and maybe even be a little sympathetic toward. We’re all the heroes of our own stories, of course, so most “bad guys” believe they are doing things for the right reason.

If your audiences end up rooting for the bad guy to win, though, you might not be doing something right – and in these 16 cases, the line might have been crossed.

16. I’d react the same if someone dropped a house on my sister and stole the family shoes.

Wicked witch of the west from The Wizard of Oz.

Dorthy can get bent. Dropping that house on her sister!

What up with that?

15. That makes sense to everyone, really.

The probe from the Star Trek IV: The Voyage Home.

All it wanted to do was talk to some whales.

14. I think we can all agree that idiots are running Jurassic Park every single time.

The Indominus-Rex from Jurassic World.

You made a living kill-machine, with abilities that far exceed those of your measures to control it, and expect it to live its life in a small cage like a cat? (Heck, even cats won’t stay in cages)

The Puppet Master from the original Ghost in the Shell movie. All he really asked for was asylum.

There is a scene where, before going on a rampage, it demands asylum and rights to a trial to which the humans pretty much ignore. It’s only after demanding its rights then being denied that it decides to go guerilla.

His people were massacred by the Jedi for reasons that were false. He was then physically crippled for the rest of his life (our side of his exoskeleton) and was told that the Jedi were to blame.

He destroyed as many as he could and took their weapons as a trophy to exact his revenge for the Jedi ruining his life and pushing his people to the brink of extinction.

Not in any specific movie but just the fact that he’s always a villain despite him just chilling in the underworld, doing his job, and not causing mass genocide, like the other gods, the worst thing he did was kidnap a teenage girl but compared to Zeus, THE HERO IN ALL THESE DAMN MOVIES he’s not that bad.

Poison Ivy from the Batman films.

All she wants is more plants and less destruction.

9. They’re not not saying that, either.

I’m not saying that I’d sooner rob a bank than beg for grant money, but I get where he’s coming from.

8. If he would just stop kidnapping people.

I kind of understand the Ice King’s motives from Adventure Time.

He’s just really lonely and he wants to be friends with Finn and Jake and he wants a gf. However, kidnapping people isn’t cool.

He’s also just a really great character. He started out as simon and then slowly went insane after he found the crown and put it on. He forgot his entire identity and became the ice king.

7. All of the Batman villains have decent backstories.

The guy just wanted to find a way to save his wife.

Batman even once tried to help him with it.

Not a movie, but Robbie Rotten from LazyTown.

As an adult, you get it, you want sleep, you want cake, your want quiet. You want to be lazy.

There were moments where you could be like “I feel ya bro.”

The dad from Dirty Dancing.

He was just trying to keep his daughter, Baby, from f%cking the local trouble maker, Johnny. And Johnny looked like he was in his mid-30s. He was actually supposed to be 25, but those were some ROUGH years.

His daughter looked like she was 15. She was actually 17. And, again… her name was Baby. I mean… BABY.

4. If that doesn’t sound blissful…

3. That was a pretty raw deal.

Hector Barbossa and his crew from Pirates of the Caribbean.

They found a bunch of gold coins sitting around, traded them as currency like anyone would, and were severely punished for no good reason.

2. If you really think about it.

I agree with Ken from the Bee Movie. His gf got pissed at him for trying to kill a bee something that he was allergic to, meaning it was potentially life threatening.

Frankly, Vanessa was terrible for dumping him because he tried to kill an insect. It’s like getting mad at someone for refusing shrimp because they have a shellfish allergy. (I know he’s not the main villain, but he was the secondary one.)

Yes, Barry was a sentient bee, but Ken never knew that. I would also go a little nuts if a bee was slowly replacing me.

Maybe I wouldn’t have gone as far as he did, but I understand his frustration.

I have to say, I can see the point on most of these!

What villain do you think may have been in the right? Tell us in the comments!