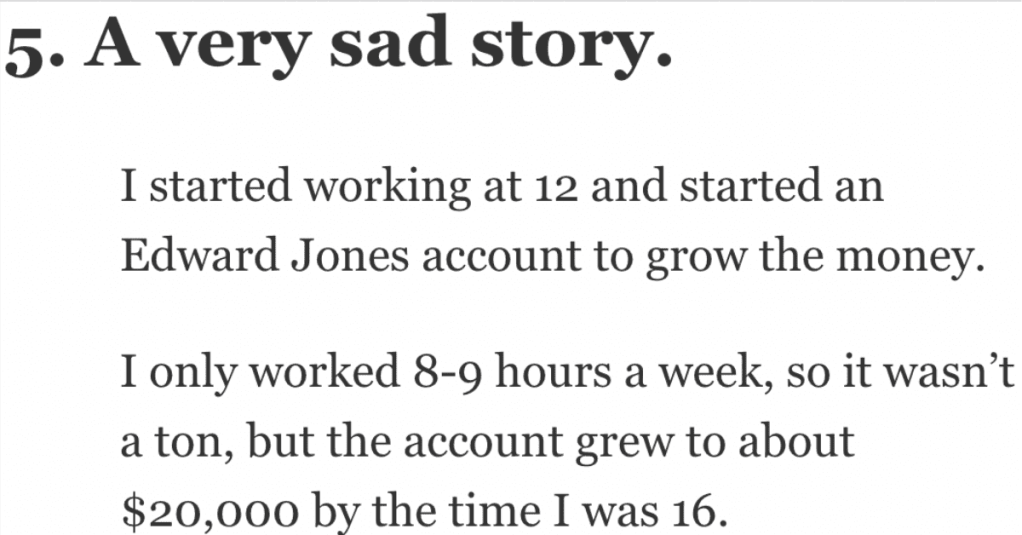 16 People Admit To Their Most Expensive Mistake

Everyone makes mistakes. That’s something I tell my young kids just about every day, no matter how they don’t like to hear it – because the thing about mistakes is that you’re supposed to learn from them.

These 16 people learned a lesson from their mistakes, and sadly, it was mostly financial.

If you’re looking to avoid some costly errors, definitely avoid the things on this list.

Not taking diabetes seriously cost me the vision in my right eye.

T1 here. Didn’t even use a meter for 7 years, walmart insulin and no doctor visits in that timeframe. Jan 2 of this year started getting an ulcer in my left leg.

That got me terrified and into the doctor and endo finally. I wish I had cared more in the past but what can you do but move forward. Hope you’re doing better, considering.

Not doing more research into hiring a roofing contractor. Paid $13k for the shittiest job ever. Flashing messed up, rotten sheathing not replaced, nails blown clear through the singles, reusing shingles when they started running low, water running behind my siding, no flashing around my chimney, it was a shit show.

They didn’t even cleanup, they left the old roof and nails strewn across my backyard and lawn. I pushed and pushed and next thing I know, he’s disappeared and I have water running in my house. My insurance guy refused to help and I had to hire an honest roofer and redo the entire job for another $13k. The second guy cut me a break since he knew I was in a bad spot.

Last I heard, that guy was banned from doing work for a few insurance companies, but he changes his name and moves to another city of state often. He would take the money, hire random migrant crews but not give them enough for material (shingles, caulk, flashing) and demand the jobs all be done in 1 day.

Rushed into buying a car. Bought a salvaged vehicle that looked like it was in great shape. It drove fine, and it was exactly what I needed at the time. About a month in some frame damage was discovered that made it hard to steer, and there were NO F**KING AIRBAGS!

I tried to turn around and sell it once I found out, but I couldn’t in good conscience sell an unsafe vehicle to anyone. So I pay $7K to install new airbags and have a few other things done.

Once the car was safe, I felt like I could stick with it a little longer…then the transmission started leaking. I had grown attached to the car by this time, so I figured I’d at least get an estimate on fixing the leak, even if it meant dropping the transmission.

Mechanic gave me a call moments after I dropped it off to tell me he was worried that if he dropped the transmission he wouldn’t be able to put my car back together, because the repairs on the car were so bad the transmission was essentially holding the whole front end together!!

Sold it for scrap and basically lost $15K total on that terrible purchase.

Got promoted to being a warehouse manager many years ago. Didn’t receive any training really because the person I was replacing was promoted to another position and they were trying to learn how to do that job while they were supposed to be teaching how to do my new job.

At some point, we started to run low on a few key products that were more in demand, so I asked the guy who was supposed to be training me how much I should have in stock, then based my order on that. Well, they didn’t tell me there was a 8-9 week lead time on this, so now everything that was on order was essentially already spoken for and I’d have to place another order to maintain my stock for the warehouse. This happened multiple times and never knew what the sales guys were selling/promising other customers as well as just taking items from my stock instead of waiting for their dedicated orders, it got messy. There wasn’t really any systems in place.

Well, it got to the point where all of these back orders had started coming in, and we were heading into a slow point in the season. Boss eventually starts asking why all these items aren’t put away in stock etc/why don’t I have any room and that leads to him looking more closely at what was order and what is still on order. Turns our I had ordered about 1.4 million dollars over what I should have…

Didn’t get fired. Got “demoted” out of the warehouse though and put back to installations. Turns out it was a bit of a blessing in disguise for the boss as the supplier increased their price 15% the year after and another 10% the year after that. They never did let me live that down though.

Tldr: I temporarily cost a company 1.4 million dollars over ordering stock because I wasn’t trained in how to do my job properly.

Taking out a $5,000 loan to help my Mom with her very very past due bills.

Long story short, she ends up missing bills again and not learning her lesson.

Freshman year of college I thought my final exam was at 11:30.

The exam was 40% of my grade, so I failed. I lost my scholarship, and had to pay to retake the class.

Using the web browser on a flip phone in the early 2000s. My parents almost killed me 😬

Not caring for my teeth when young.

Last year I had to spend $13,000 on a major procedure to restore most of my top teeth. My bottom teeth need about $50,000 worth of surgeries, implants, etc. And I just can’t afford it at all. That’s more than I make in a whole year!

Insurance covers maybe 1000 dollars total but that is such a laughably small amount compared to the whole thing.

Toss up between my last marriage and the time I ran my boss’s $3.5 million yacht aground on a submerged sandbar on the Intracoastal Waterway south of Charleston, SC.

I was working in Healthcare IT and a coworker emailed me a request to move data field xyz 123 from a test server over to production. No explanation, no flags, thats it.

I was swamped at the time. Dealing with red flag requests, getting hundreds of emails a day, and I didn’t get to it. Becasue that didn’t get moved $8 MILLION in claims didn’t go out.

6. Keep track of your valuables.

Losing my USB that had 50 Bitcoin on it. It was a prize for getting 2nd in a guitar hero contest hosted by the university I was attending.

I started working at 12 and started an Edward Jones account to grow the money.

Also, when you’re a kid you have your parent be “custodian of the account” meaning at the end of the day, you have to go through them to access the money.

Anyway when I was 16 my dad said he couldn’t pay the rent and we were going to be homeless. I asked him how much he needed and he said a little under a grand. So, not wanting to be homeless, him and I came to an agreement that I would loan him $1000 from the account.

Another key detail is, when the custodian wants to remove funds from the account, they still need to get the signature of the account holder (me). After school my dad brings this huge packet from Edward Jones and says “hey you need to sign this. Thanks again son, you’re helping out the family big time.”

Here’s where I fucked up BIG TIME. Trusting my own dad, I didn’t read through the paperwork, I just signed it and went to my room.

Two years later, my dad has ran off abruptly to Texas with his girlfriend, left me stranded (it was okay though I moved back in with mom) and I’m starting college. I visit my Edward Jones agent to strategize how to pull money from the account for school but to still have it show growth. He pulls up my account and the majority of the account is gone. Confused, I ask what happened, and he goes “yeah about two years ago, it looks like your dad pulled X amount out of the account.”

My dad took almost everything under the guise he was only taking $1000. If I would have read that paperwork, I would have seen that, but I trusted him and didn’t read it. Big mistake, but a lesson I’m glad I learned young. Never sign SHIT without reading everything first, and always open and read all your mail.

I never spoke to him again and he died last Spring. It wasn’t about the money I lost, it was about the principal of stealing from your own child and leaving him in the dust. He also did some other incredibly fucked up shit I won’t get into. It does bum me out we never reconciled, because we did have a lot of good times together too, but the fact is it was on him to apologize and make things right, not me, and he never really tried to do so.

I was 25 at the time. Didn’t know shit about the process to buy a home. So needless to say I bought something I couldn’t afford. Then the market crashed in 2008. I lost the house and my inheritance.

I was more upset about blowing my fathers savings than losing the house. Lesson learned.

I bought a boat for almost no money and now I’m broke.

the thing with boats is that even if you had money, you end up with no money

Agreeing to not having the septic tank inspected before closing on our home. It was pumped recently so it must be fine, right?

Turns out it was actually in bad shape and needed to be fully replaced. Over $20,000

1. He’ll never live that down.

When I started working in an operating theatre, I knelt down under a surgical microscope, promptly forgot my surroundings and then got up quickly and ungracefully.

I am cringing so hard reading these, and wishing money wasn’t such a big thing in our lives.

What about you? Have you made a costly mistake? Tell us about it in the comments!