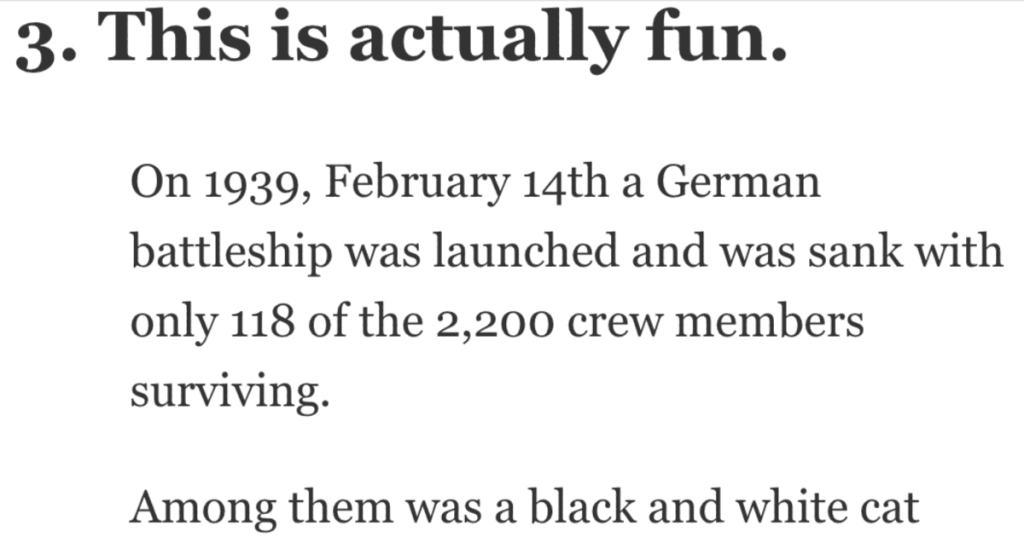 16 People Share “Fun” Facts No One Actually Wants To Hear

Sometimes when people preface a bit of information with the phrase “fun fact” they actually follow up with a fact that is fun.

Other times though – maybe even more often – the fact is not fun, not relevant, and generally off-putting for one reason or another.

These 16 facts aren’t fun and fall into the latter category (at least according to these Redditors).

There was a Finnish soldier named Aimo Koivunen who got separated from his unit. He had no food or weapons, and to avoid dying, took enough methamphetamine for 30 men.

During his insane drug binge, he skied about 250 miles, passed over a landmine and survived, and caught and ate a bird raw.

That’s just a few details, I recommend actually reading about this absolute legend yourself.

Baby kittens and puppies can’t urinate and defecate on their own. Their mothers lick their genitals and anuses to prompt them to do so and then also cleans it up.

Most people don’t know this if they happen to be taking care of an orphaned young kitten or puppy so this it ends up being a cause of death for a lot of them.

If you ever take care of an orphaned kitten/puppy or know someone who is you must use a damp paper towel or wash rag to wipe their bottoms until they urinate or defecate. 🌈 The More You Know ⭐️

German submarine U-215. Sank during WW2. Didn’t decompress though. It’s still sealed on the bottom of the ocean with 49 people inside.

I’ve always wondered what went down in there…

Before he became president, Abraham Lincoln was an elite wrestling champion.

In 300 matches, he only lost one. Bonus fun fact: He was also a licensed bartender.

Lake Superior does not give up her dead. The waters of Lake Superior are so cold that the bodies and the majority of stuff from shipwrecks is preserved.

The Great Lakes (all of them) are basically just giant ship graveyards.

Queen Victoria gave the rights of her will to her physician who she trusted more than her family.

The royal family is still trying and failing to get the will from the doctor’s family.

Kangaroos have three vaginas. I forgot how I learned that.

And two uteri! They can be perpetually pregnant. That’s why sometimes you might see a mother kangaroo ditch her young Joey when in danger because she’s almost got two more on the way already.

5. I bet that smells great.

3. This is actually fun.

Among them was a black and white cat named Oscar which was found floating on a board and was picked up from the water by a British ship.

On October 27th, 1941, the ship sank to the west of Gibraltar and Oscar was found clinging to a piece of plank and was later brought to the shore establishment in Gibraltar. When British officers learned what happened they named him “Unsinkable Sam”.

After that he was adopted by the crew of the HMS Ark Royal and in 1941, November 14th, a torpedo hit the ship. Sam was AGAIN found clinging to a piece of plank and was described as “angry but unharmed”. By this time it was enough for the por cat and remained it’a days on land hunting mice in Gibraltar and then being transferred to the UK where he lived his final days.

And this was the story of “Unsinkable Sam”

There is a forest that is 107 acres, but made up of only one tree. Thousands of aspens that share a single root system.

Dragonflies suck water up their butts and shoot it out like jets when they get tired.

Yeah, I think I have to agree. Also, I wouldn’t mind if we just got rid of this phrase altogether!

What “fun fact” do you know that people never want to hear? Try it out on us down in the comments!